Amazon postponed the launch of its New World massively multiplayer online role-playing game from July until 2021. But that doesn’t mean you can’t play it. A large beta test opens today for those who preordered the game.

The company is being careful about its entry into big-budget PC games, and so it is testing New World heavily, especially after the ill-fated launch of Crucible, a multiplayer shooting game, earlier this year. Crucible debuted in May without an extensive beta and then, to Amazon’s embarrassment, the company had to bring it back into closed beta testing in July. With New World, Amazon is making a multi-year bet on MMO gaming, and it wants to get it right through deliberate playtesting and revision.

“As we were getting closer and closer to August 25, the day we were going to launch, we started to feel like we needed more content in the game,” game director Scot Lane said in a press briefing. “We had a lot of players in the alpha, and we were getting real similar feedback, about how they wanted more. We wanted to make sure we had that long tail of experience in the game Day One.”

And today, New World’s beta debuts as a limited-time test, but for many players, it will give them a flavor for the game. I played it in a press demo yesterday, and it was fun. The combat wasn’t laggy or slow. It was quick and dangerous, with lots of running and dodging.

The game takes place in the Age of Exploration, also known as colonialism in the middle of the 16th century. The explorers find Aeternum, the Eternal Isle, a vast and diverse land. They’re searching for the Fountain of Youth, but instead, they find a place full of supernatural dangers in the middle of a cursed sea. The explorers split into three factions and fight over the mysterious resource.

Our demo was about fighting a war, a 50 player-vs.-50 player mode where one faction can declare war against another in a region and try to take over a fortress within a half-hour.

Preparing for an assault 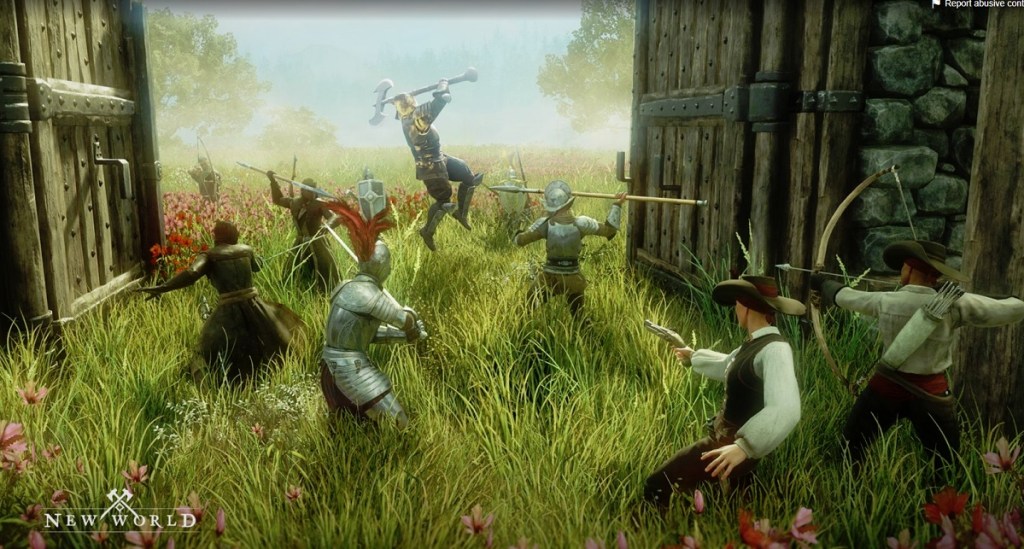 Above: A battle in New World.

To fight a war, a faction has to gain a foothold in a territory and then declare a conflict. Players get ready for the big fight, but the war can only happen at a certain time of day so that all-night battles don’t leave players exhausted.

The first thing I did was to create my character quickly and move into the staging area as my faction. I had to assign my prewar tokens. I added skill points to characteristics such as strength, dexterity, focus, and health. If you’re at level 10 or above, you have to have a chosen faction: the Marauders, the Syndicate, or the Covenant.

You also assign weapon mastery points. Each character can equip three weapons. I played in a mage role with a magic staff, but I could have easily been a soldier with different weapons. You can assign points to various active abilities, which you can call up with the press of a keyboard button. You can choose among one-handed swords, two-handed swords, bows, war hammers, muskets, and magic staffs.

You can switch between character types quite easily, as you aren’t locked into one kind of role. If you want to be a tank character, you can’t just pick it. A player can equip armor, a sword, and a shield in order to act like a tank. With heavy armor, you are stronger, but you are also less mobile. You can mix-and-match to create your own play style.

Sadly, I had no time to think about any of this. I had to dive into a match and start fighting. When I arrived in the town square, I went to the project board and signed up for a War. Then I stopped to look at the characters who were dancing on a stage. 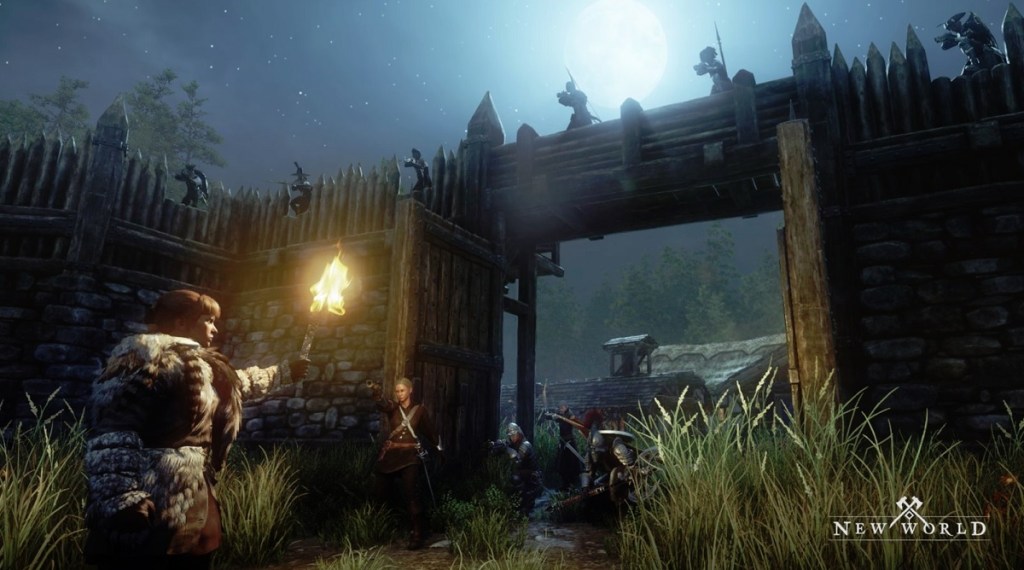 Above: Fight or parley?

In war mode, players must capture three points inside a fort with big walls. To take the fortress, players have to knock down the gates. The attackers can place siege weapons where they want by mounting them. These can fire cannonballs, arrows, or other heavy objects. There are anti-siege weapons on top of the walls that can take out the gunners on the engines. The siege weapons are fun and powerful, so you should never leave one empty. But they also make the character using the weapon a target.

In our battle, I stayed back and tried to shoot as many enemies as possible from a distance. I had a decent range with my magic staff attack, but it wasn’t very powerful. The best I could do was distract some enemies and divert them from their tasks. If someone wasn’t paying attention, I could do some real damage. But I found myself the target of plenty of fatal attacks.

The server-based physics system is pretty good, and that benefits combat precision. My staff was pretty accurate, so long as a character wasn’t moving. There was a slight lag to it that meant that my fireball would hit where the player used to be. Timing and position really matter if you want to demonstrate your fighting skill. I felt like I wasn’t good at moving and shooting at the same time.

Respawning took anywhere from a few moments to 30 seconds, which felt like an eternity in a 30-minute battle. I was assigned to a five-person group, but I couldn’t find them. So much for that notion of teamwork. If you complete a mission, you gain more reputation points. You can rank your reputation within the faction and buy consumables and other gear from the faction store.

Our team broke down the main gate and charged inside, though I stayed on the edge hoping to snipe at strays. The enemy had the option of running outside to attack us or trying to repair the gate. They could also lay a lot of traps at the entrance. The fort had multiple sets of stairs for plenty of vertical fighting. We won, without much contribution from me. But I’ll take credit for the victory, as I was shooting at the enemy from above while they were trying to stop our faction from taking the final circle inside the fort.

The faction that wins takes over the territory and reaps the tax revenues from the region, helping the winning team grow faster.

Other things to do 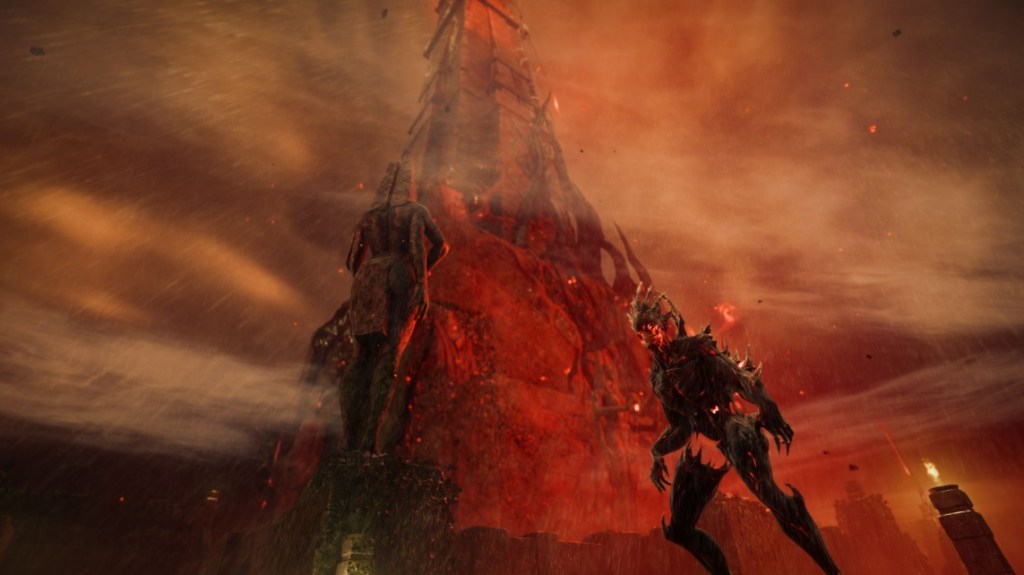 Above: The Corrupted are zombie-like creatures.

New World will have a wide variety of things for you to do as solo players or in groups. You can learn a trade and get good at it. There are 16 different trade skills that you can level all the way up to 500. You can unlock all of the recipes you need for your skill at 60 and produce useful gear, but it takes a long time to become an expert. You have to gather resources you need to make things.

There will be some player-vs.-environment play, as you can fight zombie-like creatures in the world. But we didn’t do any of that in the press demo. New World has dynamic moments in which corruption appears in parts of the world, and players have to band together to stamp it out. Players can get introduced to war in a player-versus-environment (PvE) setting where they collectively battle against corrupted enemies such as giant bears.

As for where it’s headed, the team started with a focus on survival, with the fight against the native zombies. But over time, the team started adding more broad MMO elements. The hope is that PvE players will take up PvP missions and become more social, which is one of the big ways that players become more engaged with MMOs.

I enjoyed my time in New World and was pleased with how fast the combat was. But next time, I’ll have to figure out what I’m doing first before diving in. Or maybe I should just stop being a lone wolf and team up with my 49 other comrades.