Game mergers and acquisitions are now at $9.2 billion so far this year, according to game investment bank Digi-Capital.

“Twitch is a great deal for Amazon beyond a competitive win, as it accelerates both its video and games initiatives. The $970 million deal pushes games M&A toward doubling 2013’s full year record of $5.6 billion,” said Tim Merel, the managing director at Digi-Capital.

Game M&A includes $3.4 billion in mobile games, $3.2 billion in game technology (which is where Twitch is categorized), $1.7 billion in massively multiplayer online games, and $900 million for console games.

The market’s “consolidation crush” comes from mobile growth, mobile cannibalization, regional realignment, legacy pivots, and the market cycle, Merel said. Digi-Capital believes that mobile games will grow from $4 billion in 2011 to $33 billion in 2017. 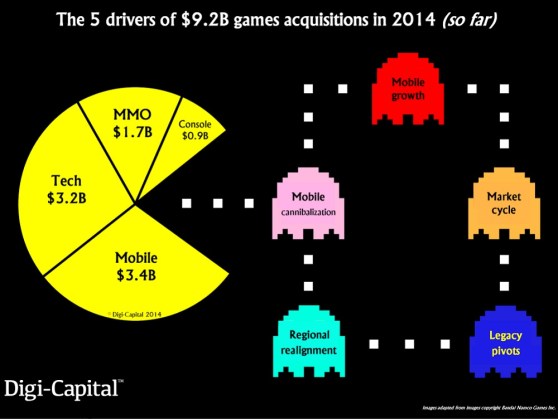