The world’s largest online retailer might not seem like the ideal buyer for a site that is all about hardcore gamers livestreaming video of their games to the Web, but this didn’t stop Amazon chief executive officer Jeff Bezos from signing the $970 million deal. While it’s easy to associate Amazon with free shipping on orders of goods that cost $35 or more, the conglomerate is also building up a media business, and its executives have clearly made a bet that gaming will help them deliver on that in the future. At the same time, Twitch is a site that can also bolster Amazon’s traditional shopping business as well.

While that might make some sense, most people, even professional industry observers, were mostly shocked and confused by the announcement.

“I’m not sure why Amazon bought Twitch,” Wedbush Securities research director Michael Pachter told GamesBeat immediately after the deal went through. “Other than [because] Google wanted it.”

Google and YouTube definitely wanted Twitch. That makes sense. Google owns YouTube, which is the dominant force in recorded video on the Internet. YouTube and Twitch account for most of the game-related video content on the Web — and that’s likely why that agreement, which we previously reported as a done deal, fell through. New reports appearing today claim that Google and Twitch couldn’t agree on a breakup fee if regulators decided that YouTube and Twitch together created a monopoly and violated antitrust rules.

This created a space for Amazon to swoop in, but $1 billion is a lot of scratch to buy something just because your competitor wants it.

“This is a media purchase,” Pachter continued. “I expect them to give Prime members something different, and think this is the first of many moves to add content.”

“Twitch seems to be a nice fit for Amazon,” he told GamesBeat. “[Twitch raises] the company’s profile with gamers, contributes to Amazon’s online and streaming video initiatives, provides a new source of advertising revenues, and [Twitch itself] possibly benefits from the scale of Amazon’s cloud computing infrastructure.”

Amazon wants you to dump Apple, Google, and Microsoft

While Amazon is a great place to buy holiday gifts and toilet paper, the company is expanding quickly into other sectors as well. It is one of the top video providers on the Web. That includes digital rentals of Hollywood blockbusters and its Netflix-like video-streaming service that comes bundled with its Amazon Prime membership program. For $100 a year, Prime gives Amazon customers free two-day shipping on qualifying items and hundreds of hours of movies and television that will stream to smartphones and tablets, set-top boxes, game consoles, and smart TVs at no additional charge.

Twitch may add value to that service. 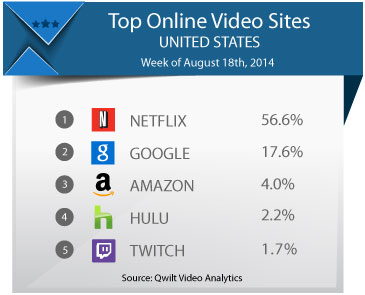 Above: Twitch and Amazon combined could start catching up to YouTube and Netflix.

What’s clear is that with Twitch, Amazon’s share of the video market on the Web is bigger than ever. Qwilt, an online-video analytics company, notes that Amazon has steadily grown from 3 percent to 4 percent of online video on average. Twitch has grown to 1.7 percent. Combined, that puts both sites well ahead of Hulu’s 2.2 percent.

“With the Twitch acquisition, Amazon becomes the only player in the industry with a successful end-to-end video platform for both user-generated content — via Twitch — and professionally produced content — via Amazon Instant Video,” Qwilt cofounder and vice president of product marketing Dan Sahar said. “Both Netflix and Google excel in one of these areas, but not the other.”

Twitch has 55 million viewers to its site on a monthly basis, and it has over 1 million different people broadcasting content on their PCs or consoles. Sony’s PlayStation 4 and Microsoft’s Xbox One even feature built-in software that enables easy Twitch streaming.

Qwilt even sees Twitch as a potential basis for Amazon to start carrying other types of livestreaming content.

“Twitch also provides Amazon with a proven livestreaming solution that one day could be used as a platform that can carry a major league sports when one of the major leagues decides to go primarily online,” said Sahar. “This universal solution, coupled with a living-room gaming and video console in Fire TV, positions Amazon as a very strong, vertically integrated video player going forward.”

Controlling its own video content is obviously important to Amazon. It makes sense, as the company wants to have something special to offer customers who purchase its Kindle Fire, Fire Phone, and Fire TV smart devices. Customers take a lot of things into consideration when deciding whether they’re going to purchase an Apple, Google, Amazon, or Microsoft device, and video content plays a big part in many people’s decision-making process.

“In our view, what we call the Great Ecosystem War between Apple, Google, Amazon, Microsoft, and others is the most important issue facing tech, media, and many other companies today,” Macquarie analyst Ben Schachter said in a note to investors. “We believe that the ecosystem war will establish the key platforms of the future and allow the winners to participate in the economics of far-reaching hardware, software, and services yet to come that will be distributed through such platforms.”

Basically, spending nearly $1 billion on Twitch is a way to entice people to choose the Amazon platform. Once ensnared by a Fire Phone or Fire TV, Amazon has an advantage when customers go to purchase music or movies — as people on those devices are more likely to use Amazon’s store.

Gaming is a big part of this ecosystem war for Amazon. It has made big investments in developers and producers working at its Amazon Game Studios in San Francisco and Seattle. The company has hired Portal designer Kim Swift, Far Cry 2 director Clint Hocking, and Killer Instinct studio Double Helix. That’s on top of a number of industry veterans from Magic: the Gathering company Wizards of the Coast who are working on marketing, product management, and more for the Amazon gaming division.

So far, Amazon Game Studios has only published a handful of games on Fire Phone and developed the original Sev Zero sci-fi shooter for Fire TV, but if its big hires weren’t an indication that it is serious about using gaming to build an attractive proposition in the ecosystem battle, the Twitch purchase is.

Depending on what Amazon does with it, Twitch could help bring more people into the companies ecosystem. But even if Amazon doesn’t release special Twitch apps or services on its Fire Phone or for Amazon Prime members, the retailer could still use the streaming service to help it sell games. While GameStop dominates physical sales of PlayStation 4 and Xbox One sales, Amazon is one of the leaders in that market online.

Twitch could turn into one giant commercial for buying games on Amazon. The video site is already a powerful marketing tool for developers. Big-name streamers can draw a ton of attention to a game by sharing live gameplay, and it probably won’t take long for Amazon to put direct affiliate links to the featured game’s Amazon store page.

“Amazon’s acquisition of Twitch will increase its capabilities within at least three key battlegrounds: Gaming, video, and advertising,” Schachter said. “The strategic rationale makes sense to us. Within the context of the Great Ecosystem War, gaming is critically important for scaling the platform.”

So yes, Twitch and Amazon makes sense. The good news for people who actually use the broadcasting site is that, since Amazon understands the importance of gaming,  it will likely spend money to invest in Twitch features. That will mean higher-quality video and maybe even better revenue-sharing options for the people making content.