Demand for workstations has taken off during the pandemic as professionals working from home have to beef up their ability to work remotely. And AMD is in the midst of a refresh with its AMD RDNA 2 graphics architecture. Thanks to that architecture, the new W6000 Series cards can deliver up to 79% faster performance than the previous generation, said AMD’s Jamie Gwilliam in a press briefing.

The graphics cards are targeted at demanding architectural, design, engineering simulation, and video editing workloads. “So the W6800 is very firmly aimed at heavy to extreme workloads across those industries,” Gwilliam said. “It’s compatible with a whole wide range of other industries. And the W6600 is the mainstream card, where we typically see people doing medium to heavy workloads.” 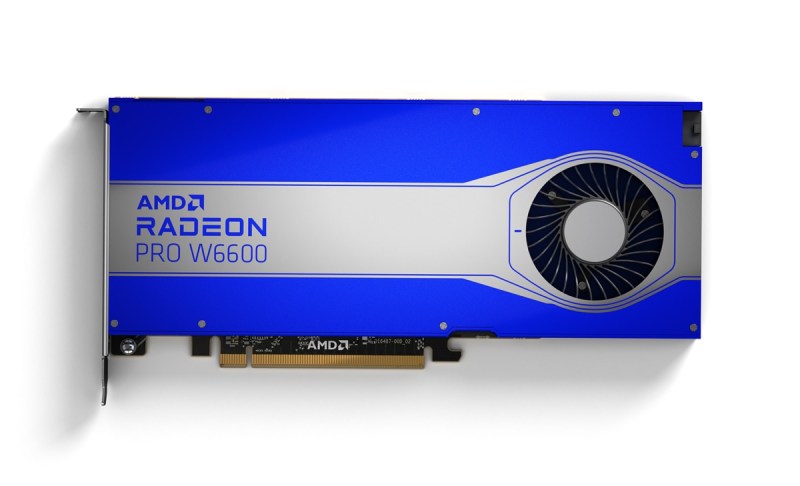 The GPUs are built on an advanced 7-nanometer manufacturing process. The new chip series has features such as enhanced compute units with real-time hardware-accelerated raytracing. It can run Solidworks software up to 46% faster in rendering tasks than Radeon Pro graphics cards based on previous-generation architectures. That helps when companies are trying to create animated films with sophisticated shadows and lighting.

“We’re seeing the rise of hardware ray tracing, accelerated in some industries and just starting in others. But ultimately, everybody wants to remove the traditional rendering process and get high-quality visuals as quickly as possible,” Gwilliam said. “And in some cases, while they’re working within their CAD application, they want to see how materials behave, they want to see how it works with lighting, but without the time lost of doing traditional rendering. So expectations around hardware ray tracing are rising.”

It has support for variable rate shading (VRS) to deliver real-time photorealistic viewports and rendering. Its AMD Infinity Cache has up to 128MB of last-level data cache integrated on the GPU die to reduce latency and power consumption.

AMD Radeon Pro W6600M GPUs are expected to be available in the HP Fury ZBook G8 mobile workstation in select countries starting July 2021. Competitively, the W6800 sits between the Nvidia RTX A6000 ($4,650) and the Nvidia Quadro RTX 5000 ($2,600) in terms of performance. But it costs less than either, Gwilliam said.