Chipmaker Advanced Micro Devices has teamed up with the Raptr gamer social network to provide rewards to loyal gamers.

The AMD Rewards program uses Raptr, and it enables players to earn points and claim prizes for participating in the AMD Gaming Evolved community.

Those players can participate if they use PCs powered by AMD’s Radeon 3D graphics cards or AMD processors.

“The AMD Rewards program is our way of thanking our loyal customers and giving back to the community that has given so much to us,” said Darren McPhee, director of graphics marketing at Sunnyvale, Calif.-based AMD.

The AMD Gaming Evolve app helps gamers figure out the optimal settings for their computers in order to play games. They can use it for updating drivers automatically and livestreaming gameplay. If they use the app or play their favorite games, they can earn points that they can use for rewards such as Sapphire Technology Radeon R9 Series graphics cards, free games, Astro gaming headsets, GameFly subscriptions, Gunnar gaming eyewear, and other discounts.

“We see AMD Rewards as a natural extension of what Raptr Rewards does for gamers,” said Dennis Fong, the CEO of Raptr. “It’s really great to be able to reward players for all the time and effort they’ve invested in playing games.” 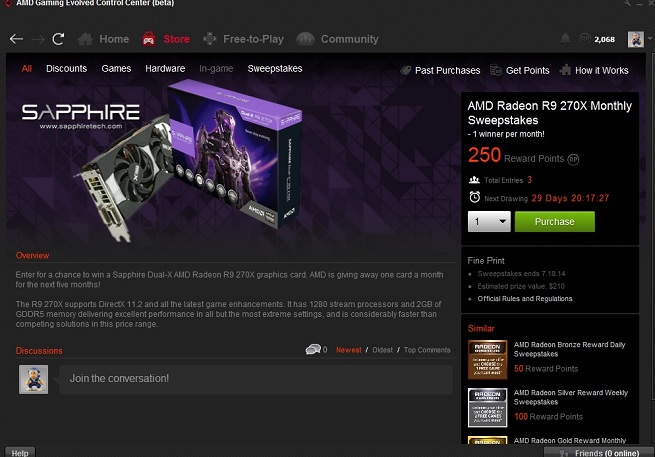