Alienware cofounder Frank Azor has built a career around gaming hardware. And he has teamed up with Eyesafe to make sure that the eyes of gamers stay healthy for a long time.

Azor believes in the mission of Eyesafe, which is to protect users from the harmful effects of blue light from the screens of smartphones, tablets, and computers. I happen to be wearing glasses that block blue light right now. And Azor feels so strongly about this that he has joined the board of Eyesafe, even while keeping his post as chief architect of gaming at Advanced Micro Devices.

Eyesafe has display technology that can produce vivid colors with reduced high-energy associated with blue light. And it makes filters for blocking blue light as well.

Waking up to the challenge 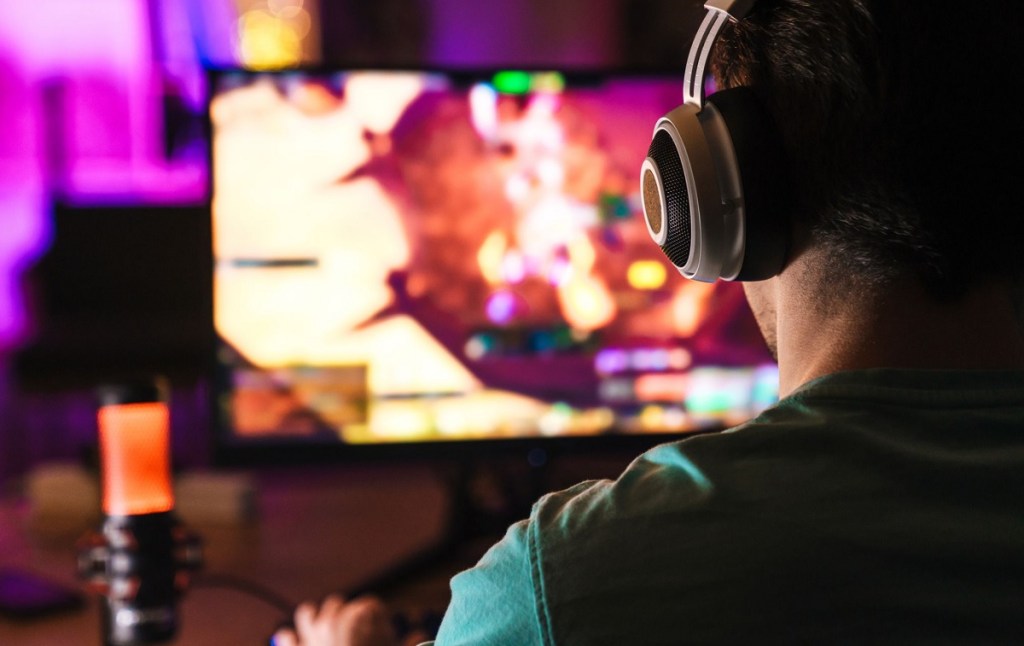 Above: Gamers see a lot of light for hours at a time.

Technology for gaming displays has been marching forward relentlessly.

“With every generation of the Alienware and Dell XPS products, we were always looking at how do we upped the ante across every aspect of the product performance and materials,” Azor said. “Displays were a really big factor on those products. We hinged a lot of products around the display.”

Then he noted that Eyesafe came into the picture and started talking about blue light toxicity and the potential harmful effects. And gamers were spending more time in front of their screens. Azor was aware that some of this could be fearmongering, but it piqued his interest. So he put the technical team on the subject and started doing some due diligence.

Blue light can be divided into two bands: blue-violet light (415 to 455 nanometers) and blue-turquoise light (465 to 495 nanometers). One of the benefits of blue light is that it helps to regulate our sleeping pattern because its presence suppresses melatonin production, which makes our bodies ready for sleep. But if you use computers late at night, it can disrupt your sleep. Blue blocker glasses can work as a countermeasure for male teens. 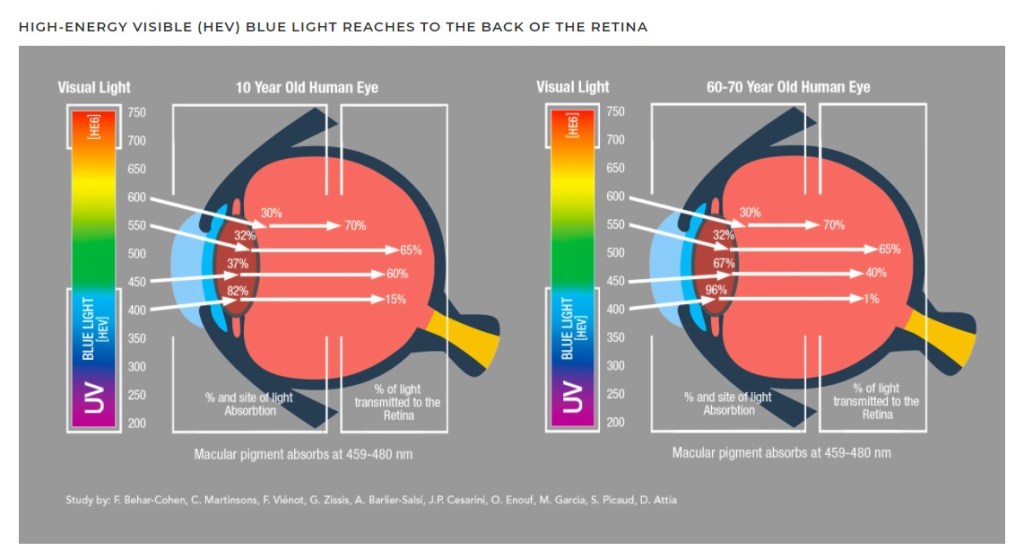 Above: Researchers are worried about blue light’s effects.

“It was just kind of like the stars aligning,” Azor said. “Everything came back and told us there is probably some meat here, that there could be some harmful effects here.”

That was when Azor had to think about his responsibility, as he had the power to make millions of these devices. After all, he is the father of two young children who are at higher risk.

“I looked at that as a responsibility that I had,” he said. “It’s one of those things where like, once you’re aware, and you’re educated about it, I feel like you have to have a moral obligation to do something about it.”

Azor had to think about mitigating the problem ahead of thinking about profits. His aim was to go to sleep at night without something weighing on his conscience.

“When you think about the displays [that can block blue light], you’re not just making them healthier and better for the millions of people that you sell to, but also for ourselves,” he said. “So it was just kind of easy and obvious to me to justify the investment and building awareness around it. That’s the mission I’ve been on since then.”

Blue light in the pandemic 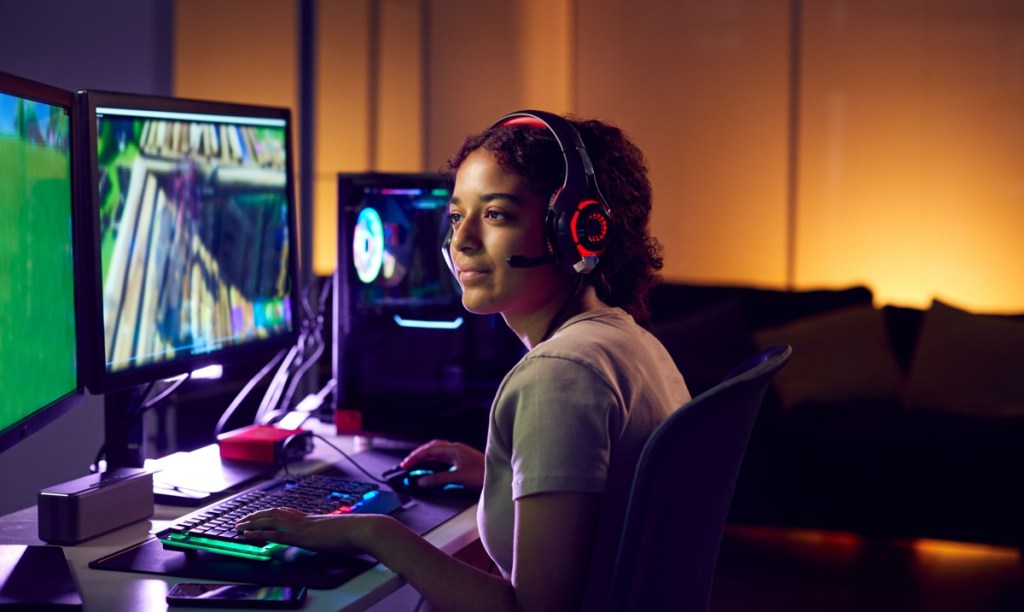 Above: Teens and children have less natural protection against blue light.

As WebMD notes, high-energy light from the sun — like ultraviolet rays and blue light — can boost your risk of eye disease. That’s raised concerns about whether blue light from digital screens is harmful. Experts think digital eyestrain, or computer vision syndrome, affects about 50% of computer users. Symptoms include dry, irritated eyes and blurred vision. The research is pretty extensive.

Azor, who spoke at our GamesBeat Summit event in April, has become an expert on the subject. In an interview with GamesBeat, Azor noted how the problem has become more acute. In the pandemic, the world quickly transitioned to working from home in 2020 due to COVID-19, resulting in a 60% increase in screen time, according to Nielsen.

Some of that increase in screen time isn’t just because of work purposes — around 6% of Americans started playing video games during the COVID-19 pandemic. And with the Delta Variant making headlines, the gaming industry isn’t expected to slow down anytime soon.

This unprecedented amount of screen time is leading to more blue light exposure than ever, which WebMD notes can lead to permanent vision changes and a potential increase in the risk of macular degeneration, a disease of the retina. 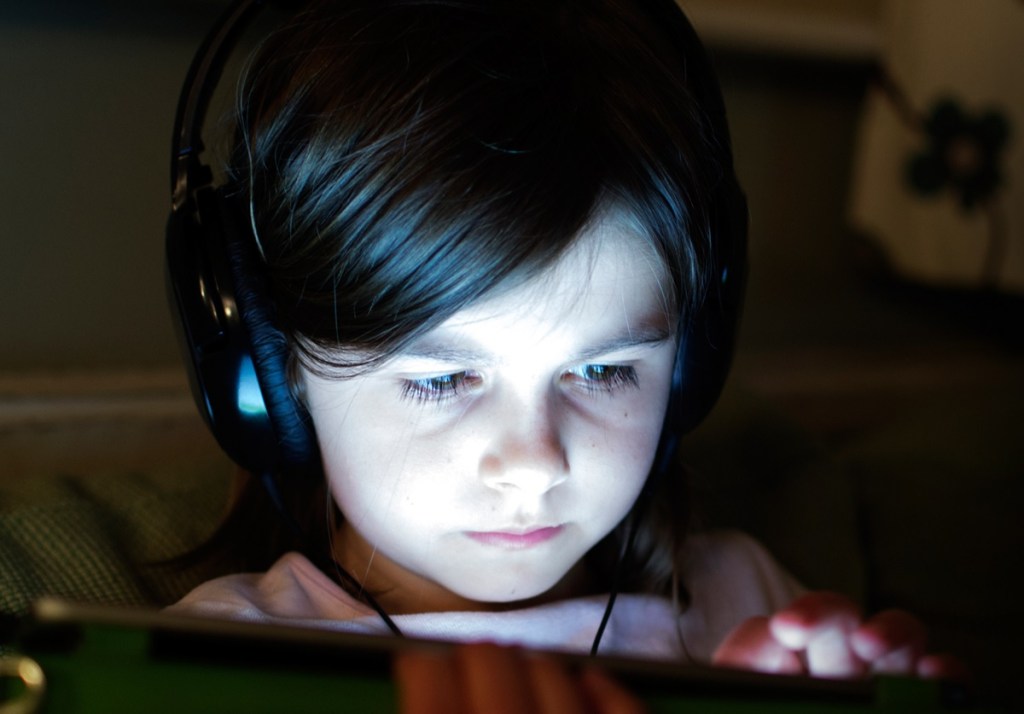 Above: Kids are getting more screen time in the pandemic.

While at Dell, the team started putting Eyesafe tech on all Dell XPS products and most of the Alienware products as well. At Eyesafe, he found a rich network of doctors, some involved with the company and some not, who could provide research information. And things are starting to change. Smartphones come with a night mode, or dark mode, for various reasons. Windows has added a night mode.

“To me, finding a solution that would preserve the visual quality and integrity of the software, the graphic user interface, the games and multimedia content, the way it was intended to be displayed, and help solve if not alleviate this potential issue altogether was very compelling to me,” Azor said. “We interviewed doctors, did the research, and moved to the solutions.”

Azor has decades of experience in technology, personal computing, and gaming. Now he’ll help out Justin Barrett, cofounder and CEO of Eyesafe, as it tries to address the blue-light problem. Part of the problem is awareness.

Eyesafe is developing tech for high-energy visible light (HEVL) and color performance that are based in human health, the company said. Eyesafe provides tech to reduce high-energy blue light in consumer electronics, helping to re-design displays. Eyesafe technology and standards were developed by a team of eye doctors, engineers, and scientists, with decades of experience.

“It’s really only getting worse,” Azor said. “Our screens are getting brighter and we’re spending more time in front of them. Especially gamers. And you go from screen to screen, from PC to the smartphone to the TV. And you’re gaming longer than ever.”