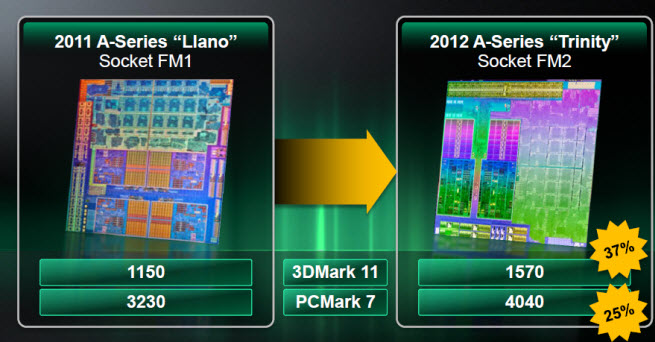 Advanced Micro Devices is taking a shot at Intel today with a new family of combination graphics-microprocessor chips to drive cheaper and faster mid-range PCs.

The chips, code-named Trinity, are accelerated processing units (APUs) that combine graphics and computing functions on a single chip. With the new Trinity-based chip designs, AMD will refresh its entire line of A-series APUs for the first time since it launched the code-named Llano chips in 2011 and since it launched its first generation of Trinity chips earlier this spring. It goes up against Intel’s widely used Ivy Bridge combo chips, and it should hit the sweet spot for gamers who want PCs that have cool 3D graphics and an affordable price.

The chips have four cores based on AMD’s Piledriver core design, along with Radeon HD7000 graphics. The chips have a whopping 1.3 billion transistors, or tiny electrical switches. That enables the high-end quad-core A10 APU to run at a frequency of 4.2 gigahertz, compared to the similarly priced Intel Core i3 2120/3220 processor with two cores running at 3.3 gigahertz, said Adam Kozak, a product marketing manager at Sunnyvale, Calif.-based AMD, in a call with the media.

AMD is also introducing other versions dubbed the A8, A6, and A4 chips at difference performance levels and prices. AMD says the high-end APU can be overclocked, or run at faster than recommended specifications (at a risk of melting down) up to speeds of 6.5 gigahertz, gaining a 68 percent increase in processor performance. The APUs can run games at anywhere from 77 percent to 107 percent faster than the same games running on a system with an Intel HD 4000 integrated graphics chip set.

“This far exceeds the performance of our competitors’ similar chips,” Kozak said. “There’s a lot of graphics performance sitting inside our APUs.”

In another cool feat, the AMD A10 can run the PC game Torchlight II (pictured below) at 32 frames per second, even with all graphics settings turned on, across three connected screens. That’s pretty badass. The products will be available on Oct. 2.