Financial dudes like strong musical endings. Arcade games players, not so much.

Those are a few of the findings of AdColony’s new study on app install ads. The video-heavy mobile advertising network categorized 11,000 different video ad creatives and then studied their efficacy in over 10 billion mobile video impressions.

The goal: understanding what works best in mobile video advertising, which eMarketer says jumped 80 percent last year, and is set for another year of double-digit growth in 2016. 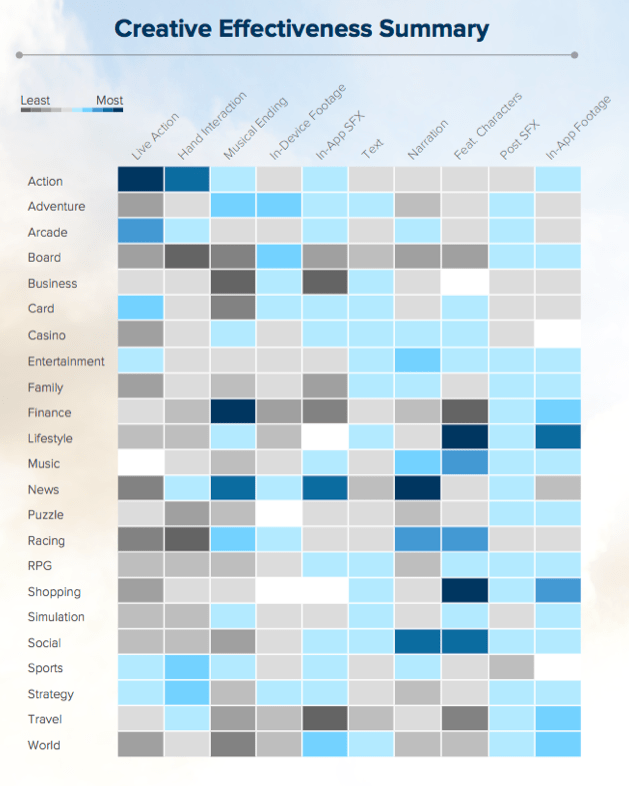 Above: What works best in mobile video ads, according to AdColony

While action game enthusiasts respond well to live action shots and hand interaction with mobile devices, people who download lifestyle apps tend to respond much better to well-shot in-app footage and featured characters. Perhaps not unsurprisingly, showing in-app special effects is a major turn-off for those who are downloading financial apps … who are also demotivated by pleasant banter and rapid repartee of featured characters. Strong musical endings, however, do very well for financial app ads.

Mobile marketers who are advertising adventure games need to focus on in-device usage and a strong musical ending, while live action and narration tend to have a negative impact on install rates:

Some of the findings are obvious, at least in hindsight: People who install social apps react strongly and positively to featured characters or actors using in the video creative. And ads for news apps tend to perform better with narration, not live action.

Others are not so obvious: Ads for music apps, for instance do NOT perform well when they employ a strong musical ending. Instead, using narration and characters seems to drive higher install rates.

While app installs might seem horrendously passé for a coming age of AI-driven bot-ified messaging platform commerce and connection, the app is still the best way for a games studio, brand, or retailer to deliver personal, deep, contextual experiences to you. And they’re still where we spend by far the bulk of our digital time.

Which means that app marketers still have a job to do.

Of course, the best kind of app store optimization is a great app experience. Both Google and Apple now look at opens and engagement as ranking factors in Google Play and the App Store, respectively. That’s something that Chris D’Avanzo, Adcolony general manager for North America, recognizes:

“At the end of the day, it’s about creating videos that are engaging, relatable, and authentic,” he told me via email. “Focusing on the in-app experience is the #1 install driver, and ads localized for unique audience segments can boost campaign performance nearly 50 percent.”