The idea that game developers can’t make money on Android is dead. Clash of Clans, Candy Crush Saga, and many more have proven that’s just not the case. The only question is what method for generating revenue is best for specific types of games.

Mobile analytics and ad firm Flurry took to the Game Developers Conference in San Francisco this week to explain that over 70 percent of all Android devices engage in at least one game every month. Flurry says that it has over 525 million Android devices on its platform that regularly boot up games. Now, the company is out to explain how developers can make money by producing games for the audience on Google’s operating system, which makes up a significant portion of the $16 billion mobile-gaming industry. Flurry’s strategies involve finding the right balance of ads and in-app purchases for a particular genre — although it doesn’t seem to have any ideas for premium-priced titles.

Flurry released a matrix that explores the relationship between how often players load up a game and how long they continue to play it after downloading it. The analytics firm believes that developers can decide how to best monetize their game based on the relation between engagement and retention. The following chart breaks up 1,382 games into 14 different genres and then places them depending on sessions per week and 30-day retention. Flurry suggests different solutions depending on which quadrant of the matrix a particular genre ends up in.

Check it out. This is all based on data from Android games in the three-month period from November through January: 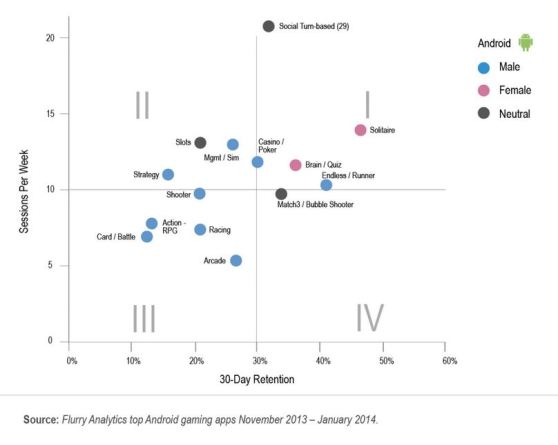 For quadrant I, the company sees a lot of success with advertising. These are games that have high levels of engagement and retention, which includes genres like solitaire, quiz games, and social turn-based games. That means titles like QuizUp and Words with Friends.

“Successful apps in this genre have built-in appointment mechanics — requirements that get a player to return to the game in a certain time period to gain a reward, which are critical to get those high frequency and return metrics,” Flurry senior director of publisher relations Torrey Lincoln wrote in a blog. “Genres in Quadrant I are particularly amenable to ads as they have the potential to generate a very high impression count over time given their high frequency and retention rates. It’s not uncommon to see advertising generate 90 percent of these games’ revenue.”

Quadrant II includes genres like slots, strategy, and management sims. They create a lot of play sessions per week, but they don’t retain users for very long. This includes games like Clash of Clans and Tiny Towers.

“To maximize revenue in genres like simulation, slots, and strategy, developers should tip the balance toward in-app purchases as these players are willing to pay good money for content and capabilities,” wrote Lincoln.

To get money out of those who won’t pay on these types of titles, Flurry suggests incentivized video ads that reward players with in-game currency.

Card battlers, racers, and action role-playing games make up Quadrant III. These have the lowest retention and session frequency, but they’re also genres that often make the most from in-app purchases.

“For these low-retention genres, it can be difficult to find the right kind of user,” wrote Lincoln. “These categories are known to have the highest average revenue per daily active user and low ‘loyalty’ — this is due in part to heavy marketing among competing games for only a niche audience.”

Lincoln explained that it is important for these types of titles to put an emphasis on generating revenue early in the life cycle of a game.

“For these games, monetization strategy leans slightly more toward advertising given the high number of impressions generated over time,” wrote Lincoln. “Of course, if you’ve got a hit like Candy Crush, the game monetizes quite nicely through in-app purchases.”

Of course, all of Flurry’s suggestions are only relevant to free-to-play games. That makes sense. Flurry is a platform that helps get the most from that business model. Games that cost nothing to download and feature ads or in-app purchases also make up a huge chunk of spending on mobile, but that doesn’t mean that premium-priced games are extinct.

In fact, Fireproof Games, the developer of mobile adventure-puzzler The Room and The Room Two, recently revealed that its premium-priced titles surpassed more than 5 million in sales. It did that without marketing the game or paying for user acquisition.