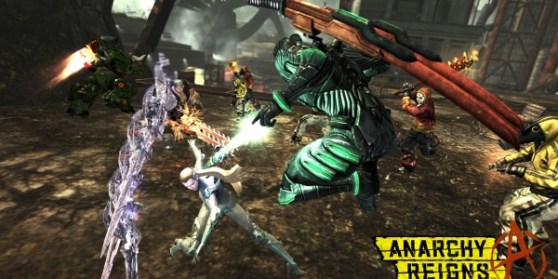 Crash! Pow! Ahhhh! Oh, sorry. I was just playing with action figures. What’s that? You don’t know how to play with action figures? It’s simple, really. You just take this dude in the leather jacket with a chain saw for an arm and smash him into that cyborg guy with the swords coming out of his elbows until one of them breaks. Watch out, here comes a giant robot to kill everyone! No!

Wait, this isn’t an action figure. It’s Anarchy Reigns, the PlayStation 3 and Xbox 360 sequel to 2009’s Wii-exclusive MadWorld from Platinum Games. While its predecessor is best known for its stylish black-and-white-and-red color scheme and game show plot, Anarchy Reigns drops those in favor of something that looks (on the surface, at least) more like a traditional third-person brawler.

A third-person brawler that you can easily confuse with smashing toys together, that is. 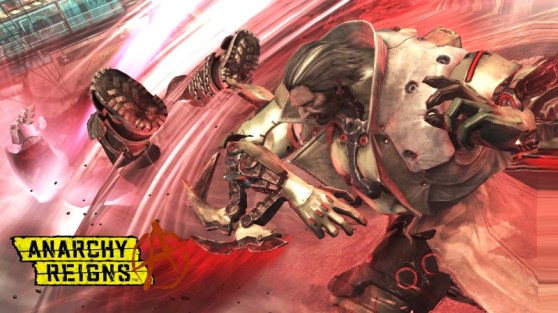 It tries to do everything

The gameplay is a little difficult to pin down. To put it simply, it’s a beat-em-up crossed with a fighter crossed with a shooter crossed with whatever you call Dynasty Warriors. In the campaign, you drop into a level with little to do but punch hundreds of dudes until you earn enough points to unlock the next mission, most of which involve punching hundreds of dudes. Periodically, you face a boss battle that acts more like a fighting game, in which you take on an enemy 1-on-1. And throughout the levels you can pick up sniper rifles and rocket launchers or hop on mounted machine guns to give yourself new ways to kill bad guys.

The combat itself is fairly straightforward, which adds to the classic beat-em-up feel. You have two attack buttons (one normal and one heavy), a block, and a grab. Each character also has their own flashy Killer Weapon. These Killer Weapons are basically just a way to make your moves do more damage (and look cooler), but figuring out their intricacies is the most fun part of trying out each of the 16 different characters.

Most of the gameplay isn’t original, but the way it mashes up different genres is surprising.

While you can use a handful of different guns in the campaign, the different multiplayer modes are where the shooter influence really stands out. You get the expected brawler-friendly competitive and co-operative choices, but then things get a little bit Unreal Tournament when you throw in less traditional options like Capture The Flag and Death Ball. Capture the Flag is just what it sounds like, and while that mode is common in every first-person shooter these days, it still feels kind of fresh in a beat-em-up like this. Death Ball, on the other hand, throws all of the usual dude-punching into a mode where you only get points for carrying a ball into the other team’s goal. OK, that does sound a lot like CTF or Halo’s Oddball, but the whole thing poses as a professional sport. A Jumbotron-equipped stadium replaces the normal multiplayer stages. It sounds simple, but it’s pretty exciting to see a bunch of ridiculous characters charging down a field and then beating the crap out of each other as they literally fight over control of a ball.

However, the best part of multiplayer is when it’s at its most straightforward: the Battle Royale mode, in which 16 players fight each other for the highest score. It’s a blast to navigate through the level of onscreen craziness that ensues when over a dozen superpowered men and women are all trying to murder each other as quickly and explosively as possible. Throw in environmental hazards that will make specific areas of the map too dangerous to stay in like monstrous squids, carpet bombing jets, and rampaging giant robots and you get what is easily one of the craziest multiplayer experiences since the Super Smash Bros. series. 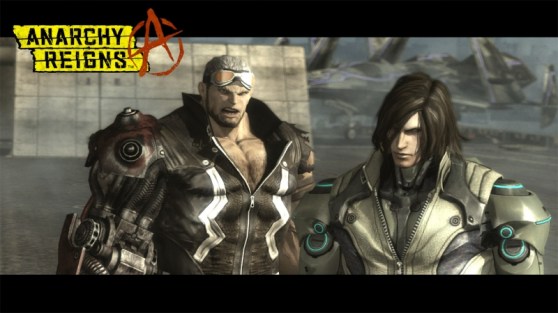 This is where that whole action figures thing comes in, because every character — from the ones you can play as to the nameless grunts you have to kill — wouldn’t look out of place hanging on a peg in a toy store. You have a ninja, a pig man, multiple robots (one that looks like a bull and one that can transform into a jet), and a few sleek cyborgs that look more reminiscent of Platinum’s high-speed shooter Vanquish than the postapocalyptic world of Anarchy Reigns. The most cohesive part of these characters’ designs is how incongruous they are, and nothing illustrates this better than the dual protagonists, Jack (returning from MadWorld) and Leo. One of them is a grim and gritty cigar-chomping brawler that seems perfectly suited for a game like this, and the other is a long-haired pretty boy who … also seems perfectly suited for a game like this. It’s bizarre, because while some of the characters don’t seem like they should even exist in the same universe as the others, they all manage to fit together in a weirdly disconnected way.

This might not sound like something that should belong in the “What you’ll like” section,  because I wouldn’t even say that most of the characters look particularly interesting or well designed. They all seem like something you’ve seen before, if not a million times before, which really adds to the feeling that this whole thing is the video game equivalent of you and your friends dumping out a box of action figures and pretending to have them all fight each other. This interpretation doesn’t excuse the semi-boring art direction, but it does put a lens on it that colors the experience as more fun and more easy to digest than you would expect.