Consumers continue to purchase more Android than iOS devices, the 3DS is less popular than the Amazon Kindle, and more than half of the mobile-gaming audience is women.

Market-research firm IDC and mobile-market-tracking company App Annie released a new report today that helps make sense of mobile and handheld gaming scene. The report found that more than 35 percent of mobile gamers prefer playing on iOS devices, which is well ahead of all other devices:

More people also prefer Amazon’s Kindle Fire line of tablets for gaming over Nintendo 3DS and DS. Of course, those are two very different types of gamers, but it clearly illustrates the strength and size of mobile gaming. It is also one of many reasons why some developers choose to develop games for iOS and Android over 3DS and Vita.

These figures come from a June IDC survey of 1,117 U.S. gamers, which the firm defines as anyone who plays games. It also found that two times as many players prefer Kindle tablets over Android tablets with Google Play.

Additionally, the study reports that Android’s worldwide growth continues to far outpace iOS. From the second to third quarter of 2013, Android grew 1.4 percent while iOS only captured an additional .1 percent. Android now has a global market share of 58 percent and is growing at a rate 14-times faster than iOS. 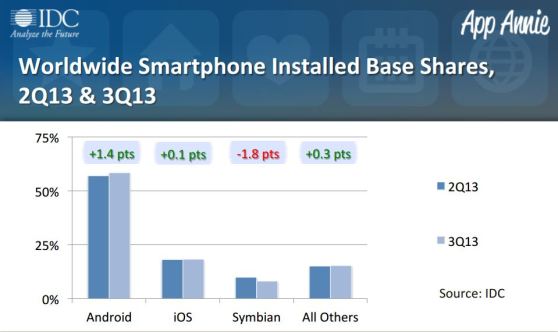 Of course, install base isn’t everything. Apple’s mobile operating system continues to best Android in terms of gaming revenue, according to the report.

“Android was not too far behind Apple in U.S. gaming consumer preference, but iOS generated three-times the U.S. gaming revenue that Google Play did in Q3,” reads the report. 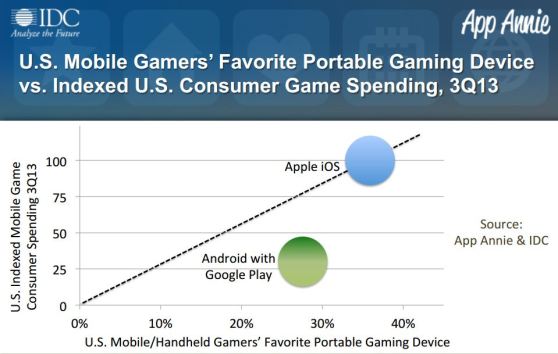 Above: Consumer spending is more than three-times greater on iOS than Android’s Google Play market.

App Annie is hosting the full report on its website, and you can download it for free.