GamesBeat: Within that seven years, do you remember any big challenges or points of crisis that you had to deal with?

Smets: Oh, so many crises. I think we always — or I always look at a crisis as a game. How are we going to fix it? Very forward-focused. I think a lot of the people on the team feel that way. There were a few critical moments. One was after we were two years in, two and a half years in. We spent the first half year in the concept phase. We do a lot of prototypes, particularly for an open world game. We had a broad set of prototypes, and after two years we figured that was a good moment to do an update to our publishers at Sony, show them our progress. It would be another six or seven months before Killzone: Shadow Fall was done and the rest of the team would move over.

We integrated all the prototypes into a more coherent experience. We showed all of that to the publisher, and the feedback was not what we were expecting. We felt pretty good about our presentation. We had videos of gameplay. Some people were enthusiastic, but there were also some people who raised big concerns. They were not sure if it was going to be mass market. They really had their doubts.

We went back and started thinking. There’s always a day where you’re just disappointed, because you’ve built this beautiful thing and you want it to be loved by everybody. But I think after that day, we had to be honest with ourselves. Apparently this concept, where we’re at right now, doesn’t communicate the vision that we have for it. The concept isn’t selling itself well enough. We see things in it that others don’t. We need to get more eyes on it.

We did more focus tests, and that was brilliant. For instance, it showed what was wrong with the lead character. We didn’t see ourselves, anymore, that she was too young, too “perfect princess.” There was also an issue with the world. People loved this idea of beautiful nature and robot dinosaurs, but they didn’t get the backstory. They didn’t get why the world was dangerous. And the gameplay we showed—it was competent gameplay. But we had concept art that showed the promise of you hunting, Aloy as a hunter. We didn’t really live up to that.

All this was great. We finally had a better idea of why the concept wasn’t selling itself and what the issues were that we had to tackle. That’s also one of the reasons we realized that we had to bring in a strong narrative director, someone who could tell the story of the entire world. 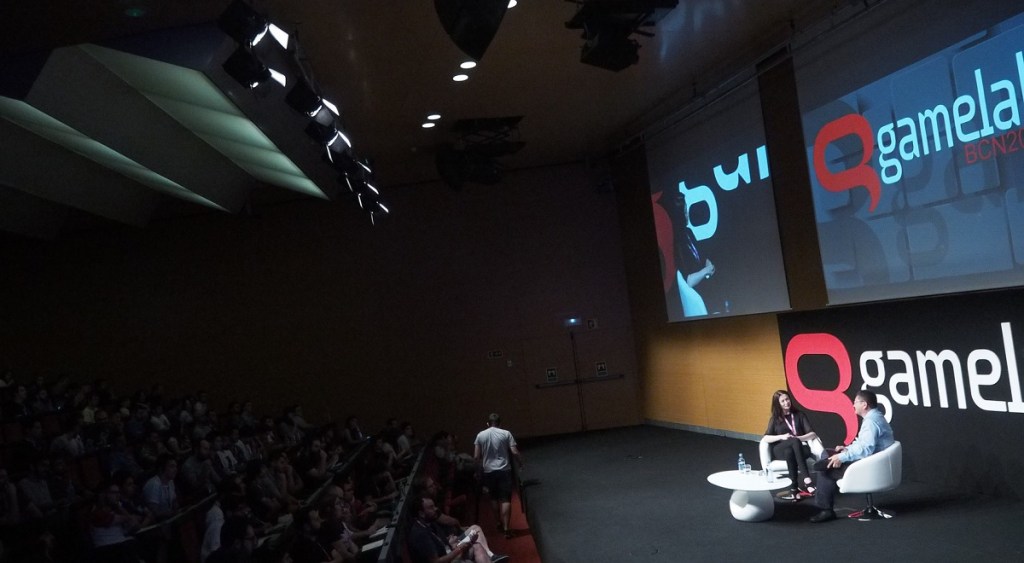 Above: Talking Horizon Zero Dawn at Gamelab 2018 in Barcelona.

GamesBeat: Somewhere along the way it made sense to figure out how to shoot an arrow into the eye of a dinosaur and pull it down with a rope.

Smets: There were a lot of things that sounded good on paper and didn’t work out so well for real. We started over a lot of times to get that core combat loop where it had to be. I think we thought we would be able to do that more quickly, but it took way more iteration. It was just before we announced the game in 2015. I think the six months before that is when the combat loop finally got together. We finally had a proper demo showing that core gameplay loop.

GamesBeat: I remember that. You guys were pretty nervous at the time?

Smets: Having worked on something for five years and then showing it to the world—I remember talking to a co-worker, JB, the original creator of the concept, and he just said, “What if they don’t like it?” I said, “No, they’ll like it!” We had shown the trailer we produced to quite a few people already. I said, “Why don’t you think they’ll like it?” “Well, maybe it’s just silly, these robot dinosaurs.” Well, what are you going to 30 minutes before the show starts. We’ll find out soon enough.

Luckily it turned out to be a magical moment. Hermen just said a few lines about how this was the next thing from Guerrilla, and then we had a trailer, a pretty long one, five minutes, and afterward there was huge applause. I was so emotional. It was beautiful. Over the next week we got a lot of good responses from the internet. It was a big moment.

GamesBeat: The internet was behind you.

Smets: They were very kind to us! [laughs] And so was the media. We had a core combat demo behind the scenes at E3, and they liked it. I also remember there were some—people said, “We’re super excited about Guerrilla’s next game, but let’s see if they can pull it off.” That was still the angle to it.

GamesBeat: At Sony, were they asking you if you could do this in three years, or four years?

Smets: No. I think that’s another great thing. We’ve always been supported by Sony throughout this seven-year journey. They were always very honest about any doubts that they had. Of course any publisher would love to get games done sooner, but we always explained why we needed the time we needed. In the end that worked pretty well. I’m still very grateful that we have a publisher that supports the dev team and trusts the dev team to do the right thing.

GamesBeat: It’s interesting how gaming has grown up with you guys during this whole time. You’re the only triple-A studio in the Netherlands. What is that like, as far as creating awareness of the game industry in your nation?

Smets: That’s true. Killzone 2, when we launched Killzone 2, that’s the first time the Dutch mainstream media noticed that there were people making games. Wow, it’s not just two guys in an attic somewhere, it’s apparently a profession? I remember having to answer questions at family parties. There’s always an uncle saying something like, “Oh, are you still doing that game thing? Shouldn’t you get a real job?” [laughs] That hasn’t really changed. If there were more triple-A studios in the Netherlands, maybe we’d have that game community, that culture like you see in Japan.

But it’s starting to improve. I love how newspapers like the Guardian write every day about games as a medium, like people doing books and films. It’s great that the medium of gaming is being seen out there more and more. I think the Netherlands will follow at some point.

GamesBeat: Horizon was a tremendous success, of course. What kind of impact has that had on the studio?

I’m not really a morning person, but that day I woke up extra early. I was at the office early. A lot of people were in already, looking really nervous. The last couple of minutes we got really quiet, and then people just started pressing F5 and then shouting about the scores. Everyone was so happy that the reception went so well. That’s great, and then sales were also really amazing, 7.6 million units in its first year. We had high hopes, but that not high.

The response from the community, I think we didn’t see that coming. We were overloaded with nice messages, fan art, cosplayers, people sharing their screenshots, people sending the most fantastic things. The love from the community, I think maybe that had the biggest impact on the team. We felt so rewarded to see that we made something that was loved by so many people. 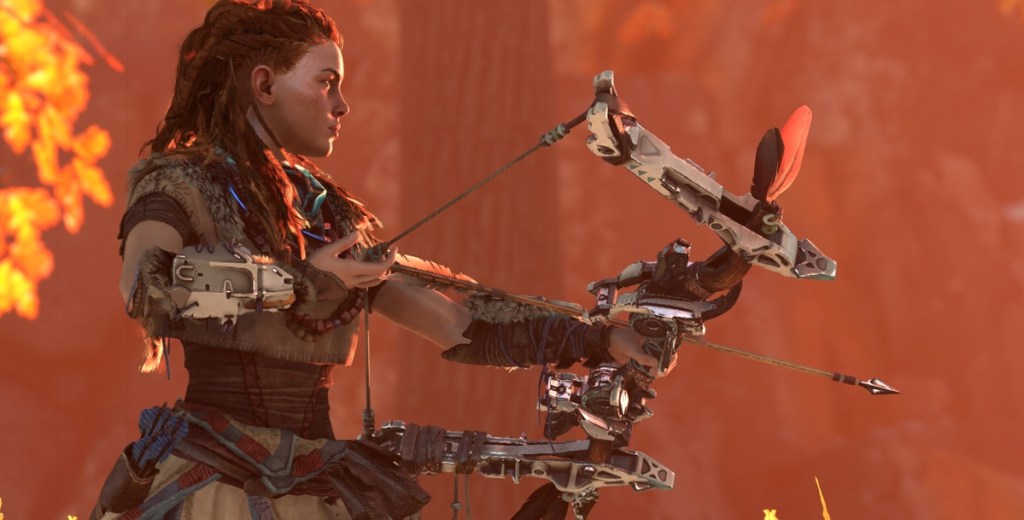 Above: Aloy is the female hero of Horizon: Zero Dawn.

GamesBeat: It’s like a cultural impact, in its way. Everyone seemed to think Aloy was very inspirational.

Smets: It’s something celebrated by all of us. As a team, we’ve really grown. We’ve become less cynical, and more confident as well, around things like storytelling. Sometimes you fail, but you just need to keep from fixating on that and move on.

GamesBeat: You’ve gotten to do some cool new things with the engine. You licensed it out, right?

Smets: We gave the engine to Kojima Productions, which has been wonderful for us and the team. We’ve had a great collaboration. We play very well with the Kojima guys.

GamesBeat: Has he told you what Death Stranding is out?

GamesBeat: It’s a very elaborate process, though, checking out the engine, right?

Smets: That was a quite unique situation. He’d gathered about 50 world-class developers and signed a deal with Sony as a publisher, but they didn’t have the technology to make a game. I can’t think of anybody else who was ever in that position. Mark Cerny took Kojima on a tour of the studios around the globe to see how they operate and the technology that they have. He visited us, and we were really excited, because of course we’re big fans of his. We have a lot of respect for what he’s done throughout his career.

Our tech director and art director had this 190-slide presentation explaining every bit of our engine, what it does, how it works. They came over and had a great day. It’s always nice to speak to other developers. At the end we gave him a memory stick with a copy of the engine and said, “Well, if you want it you can have it. If you don’t want to use it, that’s fine too.” We put it in a nice little box. He’s part of the Sony family now, right? You help each other out.

Working together with Kojima is a lot of fun. It’s set up in such a way that our developers speak directly to the developers on the Kojima team. It’s a very direct way of communication. Of course there’s a language barrier, but we have dedicated full-time translators who translate all the communications. We can work together even though we’re on different sides of the world. It’s nice to have found a group of like-minded game developers. It’s very inspirational for everyone.

Smets: Supermassive Games, yeah. That was the Killzone engine, an older version of the engine, rather than the open world version.