GamesBeat: In some ways that seven years of investment is paying off in some unexpected ways, then.

Smets: You don’t ever expect to share your engine with another team, I guess? But I think the seven years paid off, first of all, in a great game. It paid off in the company getting there in our development process. The engine, that was a lot of work. Our engine was really tailored for linear shooter games. It was not tailored to do an open-world action-RPG. We had to work on very low-level systems to get it to stream. There’s a whole tools layer on top of that as well. That also took a lot of time, to get the tools to the place where they had to be.

In retrospect it was really lovely to do our DLC expansion, The Frozen Wilds. The tools were ready at that point. We had a very happy team. We had this great fan response. People enjoyed the game. We added a beautiful page to the map of Horizon. That was a super nice period. 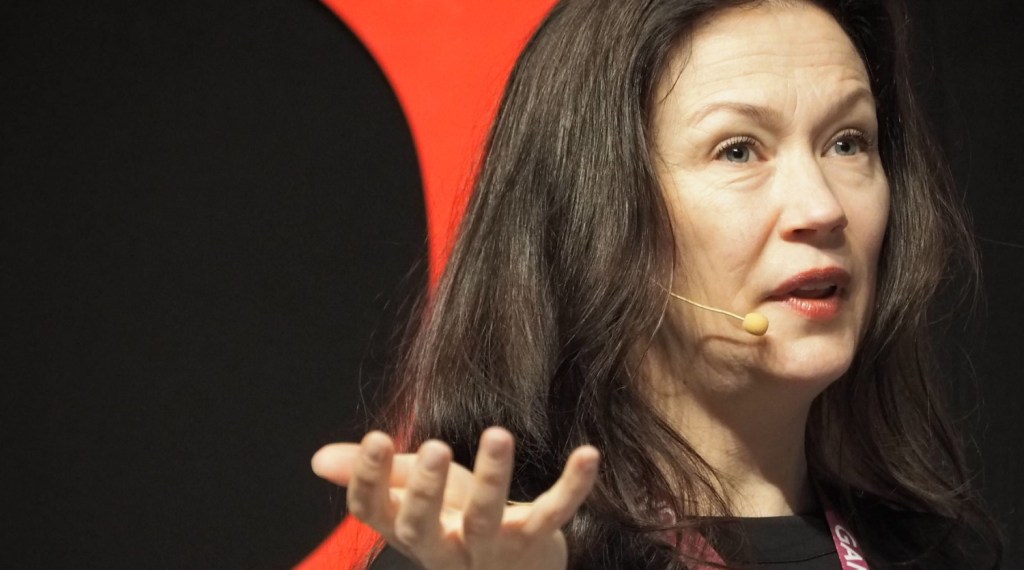 Above: Angie Smets, executive producer at Guerrilla Games at Gamelab 2018.

GamesBeat: It’s very interesting that you thought about these things eight years ago, and you wound up still being so trendy when you came out. You had a woman in the lead. You had a bow. You had a grapple line, I think? All these things that became cool in games in the last couple of years, you had them already. Just lucky guesses?

Smets: I don’t have the recipe for it. I think there’s a thing with creative people, where you have a gut feeling? You pick up on certain ideas and elements.

GamesBeat: How many people out there have played the game, and how many of you have finished it? There are some spoilers we could talk around. What I’m curious about—you have your ending, and the credits roll, and then there’s an extra ending on top of that. It kind of resets everything you thought had happened in the first ending. Did you always envision that kind of dual ending?

Smets: I can’t really talk about what’s next, but we obviously didn’t invest seven years into creating this big, rich world and all of the technology for nothing? I hope everyone is super excited for the future.

Audience: We’ve seen a studio like Guerrilla grow up in the Netherlands, and companies like CD Projekt Red in Poland and other European countries, but we don’t really have equivalents in Spain. What are the steps you think need to be taken for Spain to build companies like that?

Smets: It’s a difficult question. I’m not very up to date on the latest and greatest in the Spanish game development community. But I don’t think you start a triple-A game studio just from one day to the next. If you have a team and you believe in what you’re doing, take it step by step, and make sure your long-term goal — if your goal is to become a triple-A studio, always keep that in mind. Just keep going.

Audience: Over such a long period of time in development, did you ever have slowdowns? Were there times when you weren’t sure what you were doing? Is there a way you were able to overcome those kinds of situations?

Smets: It’s something you probably see in any game project. All of our games have had periods where motivation isn’t very high. Particularly if you hit a couple of hurdles that are really hard to fix, or a few too many, it’s hard. What I tend to do — I don’t know if this could work for everyone, but if you go back a few months, go back a year, and take some of the prototypes you had then, the videos you had then, you can show them to people and say, “Look, we’re making progress. There are problems we need to resolve right now, but we’ve come a long way already.” Try to let them see the good things we’ve already done.

For us at Guerrilla, the year before we announced at E3 was probably the toughest one in terms of motivation. We did a big focus test where we identified a couple of big problems. We were motivated to fix them, but it was pretty hard to fix them. It wasn’t as easy as we were hoping it would be. When you know that at some point you need to show it to the world, you want to show your best work. Having a great response after you reveal a game, that’s always the best thing to motivate any team. People need that motivation. But looking back at all the things you’ve already done, I think that’s one tip I’d have for you. 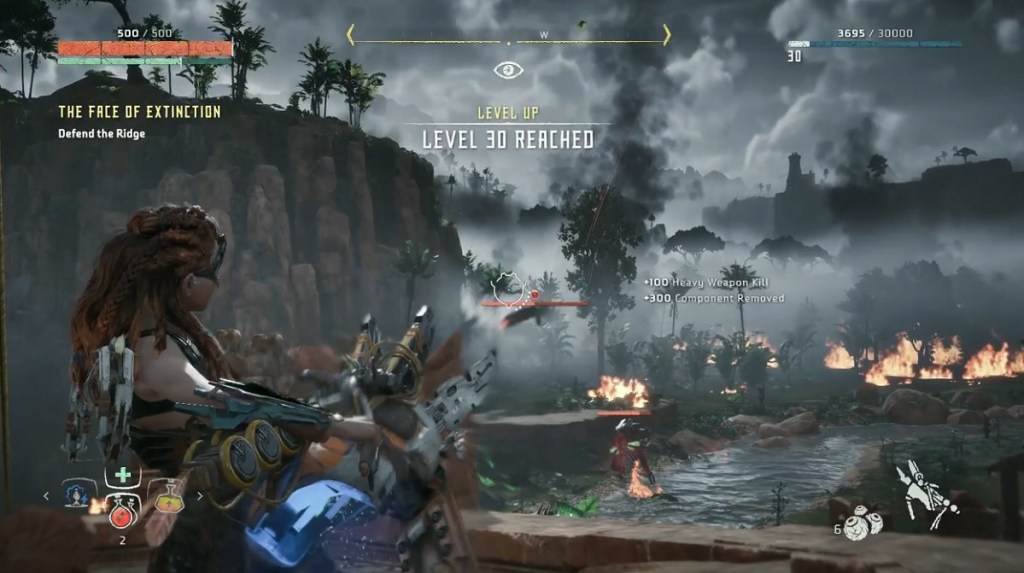 Above: Aloy fights off the dinosaur machines in Horizon Zero Dawn.

Audience: Over such a long period of development, what were the biggest changes in how the game worked, how you envisioned the game that made a big difference?

Smets: Oh, definitely, many of them. Usually it goes in a more iterative fashion, though. With the robots, it started with the idea of dinosaurs, and then we thought that making them more animalistic would be the right direction. From there, if we wanted them to go animalistic, you also need to create an animal ecology of robots. That’s how that idea evolved. In the end we had a robot ecology, different robot animals for different functions. In the beginning we had more purely fighting robots. If look at the two next to each other, it’s a big difference, but that iteration goes in steps.

We had other big ones. In the first three years of development Aloy had a horse. She was riding on a horse. She didn’t just mount the robot animals, she had a horse. That’s something that started out looking cool, and we put a lot of time into it. You need to figure out the AI of the horse, to make sure its movements are very smooth.

Then the new narrative director came in, John Gonzalez. He was really looking at the world we were trying to create, and he said, “We need to make Aloy more special. She’s the one special character.” The robots were becoming more dangerous. They weren’t domesticated robots anymore. So what he proposed was to get rid of all the big animals in the world – all the horses had to go – and then Aloy would get the Focus device. She was the only person in the world who could hack a robot and mount it. That would make her special.

That was one of the biggest changes we did in terms of world-building, and it even had a huge impact on gameplay. That was a bit more effort, and not everybody agreed about it in the beginning. All the big animals needed to go? Let’s say you’re an AI programmer and you’ve been working on this horse for a couple of years. You don’t want to just throw it away. But that’s a good example of one of the bigger changes we made. 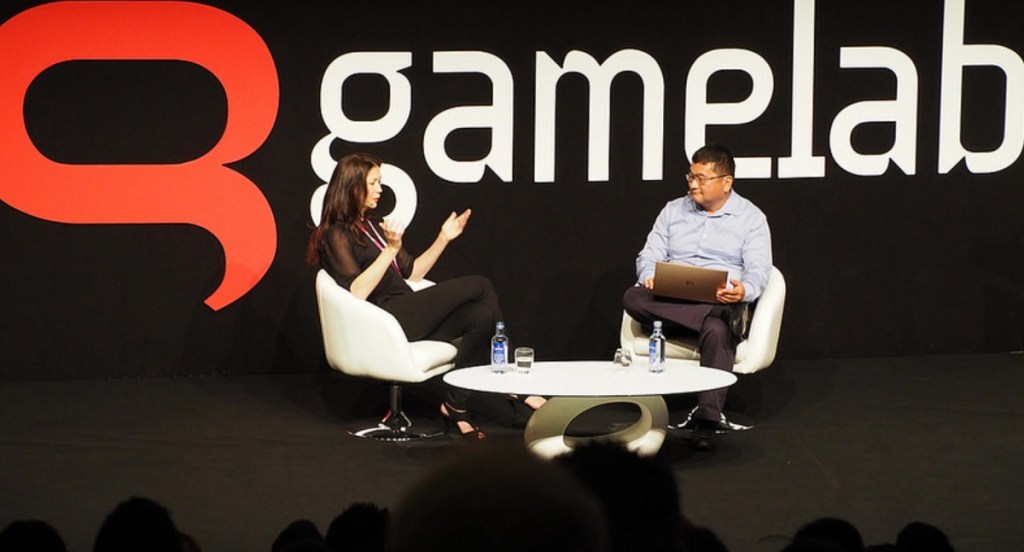 GamesBeat: Was an artificial intelligence always the bad guy? That’s another timely decision

Smets: Um… Yes? In the first years the story was all over the place. When John came he was really able to build a cohesive world and explain everything in the story. But the AI, I think, yeah.

Audience: You talked about building lots of prototypes as part of the concepting progress. Can you tell us more about that? How would you advise developers going into a new genre or new mechanics?

Smets: What we did, we started very broad. We didn’t take any prototypes to a point where they were so polished you could actually release it. We just went broad and prototyped a lot of high-level concepts. Then we started narrowing it down from there. The good thing is, as you become better at doing those quick prototypes, you can do even more of them. You don’t get too stuck on one or another. It’s hard to say goodbye to a prototype if you’re really invested into it over a long time. It’s important to get the discipline to iterate and build on what you’ve done. It’s hard to say goodbye to ideas that looked great on paper, but just aren’t fun.

It’s a sort of funnel. You start with many ideas and you do quick iterations. You sit down with the concept for your game and you try to see how these ideas fit in. When you start on a prototype you probably have an idea of what the mechanic or the system would deliver, but you should do a quick check – does this still deliver what I wanted it to now? If there’s a problem, do I see a solution for it? Just try to narrow it down.

You need to be honest with yourself. There’s a difference between something working versus wanting it to work. You might want something to work and be great, but if you can step away and look at it honestly, it might not.