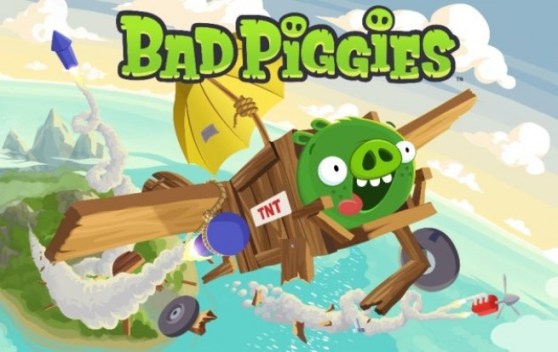 The titular fowls of the Angry Birds series may have slingshots and magical powerups, but the villainous pigs have the advantage when it comes to technology and engineering. At least, that’s the impression we get from the trailer for Bad Piggies, the new game from developer Rovio.

Bad Piggies is a vehicle-based build-and-solve puzzle game that hits Android and iOS on September 27. Yahoo! Games has a first look at the game in action:

Bad Piggies shares more roots with Angry Birds than just the visuals. Both ganes have short stages with small goals. Both dole out one, two, or three stars depending on how well the player performs in a level. When it comes to accomplishing the goals, however, Bad Piggies has a lot more in common with the odd Banjo-Kazooie: Nuts & Bolts.

The piggies are engineers and can create land and air vehicles using dozens of parts arranged in a two-dimensional grid. The video shows the pigs operating cars, planes, helicopters, and rocket ships. It’s very reminiscent of the vehicle editor in the Banjo-Kazooie game where players could also make cars, helicopters, and planes.

Bad Piggies might have an advantage over the Rare-developed platformer since the Rovio game has a punchier pace. The best part of Nuts & Bolts was designing and messing around with the vehicles. All the exploration and trinket-collecting got in the way of that fun.

Rovio’s level structure is much more conducive to the type of experimentation that this sort of gameplay works best with.

This isn’t the first time Rovio has reworked a familiar mechanic from another game. The studio’s most recent release, Amazing Alex, shares many of its core ideas with the early ’90s release The Incredible Machine. Both games provide players with a box of items to create Rube Goldberg-like devices to solve puzzles.

None of this is to say that Bad Piggies or Amazing Alex are ripoffs of other games. Rovio is a talented developer, and it can make something new out of familiar parts.

In fact, as someone who’s been playing a ton of Kerbal Space Program, a game about building and launching spaceships, I’m looking forward to a game in which I can build vehicles that do more than crash into the moon.