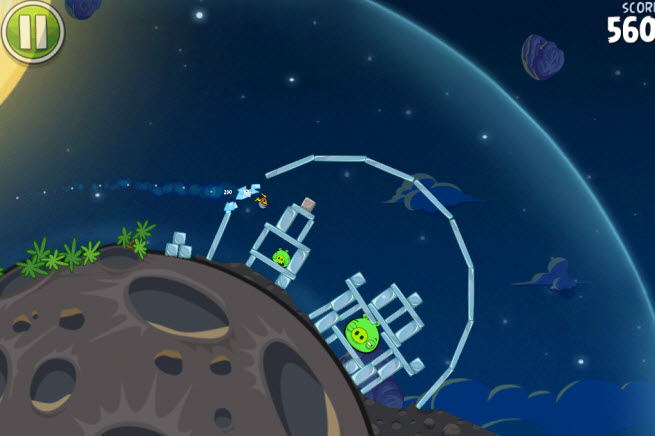 With 10 million downloads in three days, Angry Birds Space has vaulted the mobile-game business into the stratosphere of bona fide entertainment blockbusters. 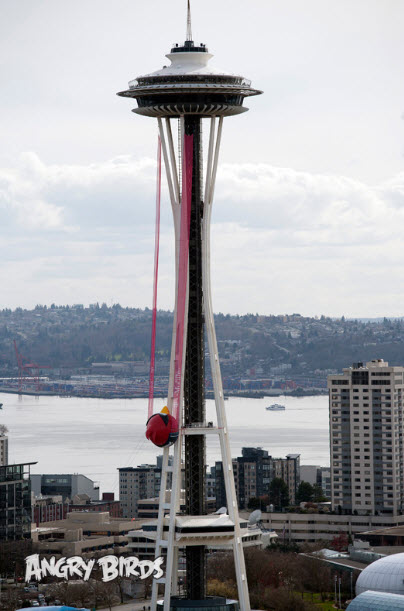 It’s hard to calculate how much money the game has generated because prices range from 99 cents for Angry Birds Space on iOS to $6 on Windows PCs. At a minimum of $10 million, that puts Rovio in a different league among mobile-game publishers.

Still, the mobile game industry is young and its revenues are much smaller when viewed against the backdrop of other entertainment hits. If this were a movie’s opening weekend, the $10 million take wouldn’t be so impressive, as Hollywood’s “The Hunger Games” proved over the weekend with box office receipts of $155 million.

And in its first 24 hours in November, Call of Duty: Modern Warfare 3 generated $400 million of sales on the PC and consoles.

But looking at the sheer number of users, Rovio’s 10 million customers is impressive. The Modern Warfare 3 user count was just 6.5 million people making purchases in the first 24 hours. At around $10 each, The Hunger Games’ opening audience was perhaps 15.5 million people.

Worth noting as well: Rovio is selling a lot of non-game merchandise through partners such as Walmart. It is also selling virtual goods inside the game, with in-app purchases of 99 cents or more. There is no limit to the number of virtual-goods purchases that players can make in the game.

All told, Rovio has reached far more users across the globe than the other blockbusters, with more than 700 million downloads of the whole Angry Birds series since December 2010.

“That’s a pretty significant achievement that has not happened on iOS or Android before,” said Matthaus Krzykowski from mobile search firm Xyologic and an occasional consultant for VentureBeat. “For comparison, it took a juggernaut like Pinterest more than one and a half months to get to such numbers.”

Rich Wong, a partner at Accel Partners, the venture capital firm that is a backer of Rovio, said that the spectacular Angry Birds Space launch is due to great execution and other factors, including the fact that there are far more smartphones and tablets in the market today than one or two years ago.

Rovio also leveraged third-party promoters such as T-Mobile, which created a 300-feet-long slingshot with a Red Bird on the Seattle Space Needle (pictured). It also worked with Walmart, Samsung, and National Geographic on cross promotions and collaborated with NASA for publicity that raised the game’s visibility.

Rovio was able to debut Angry Birds Space on iOS (the iPhone, iPod Touch, and iPad), Android, the PC, the Mac, and the Barnes & Noble Nook eBook reader all on day-one. It is also working on versions for other platforms such as Windows Phone 7.

Andrej Nabergoj, chief executive of App-o-day mobile discovery site Iddiction, said, “Angry Birds Space is really polished game. It’s a textbook example on how to build on existing intellectual property. If the original Angry Birds was a surprising success, nothing was left to coincidence here. Deeper game play, gorgeous graphics, innovative physics, reinterpretation of the original music. But most importantly, as extremely well-coordinated and innovative global marketing campaign involving the space station, installations, etc. Angry Birds Space repositions and re-establishes Rovio as one of the leading and most innovative mobile gaming companies.”

Tim Merel, managing director at Digi-Capital, a boutique gaming investment bank, said, “It points to the strength of the brand, and in particular the potential for Angry Birds to turn Rovio into one of the first true trans-media games companies to come out of mobile. The potential for Rovio as an entertainment platform  company is very strong, and 2012 is likely to be a pivotal year for realizing that vision. Delivery on all fronts (other game types, TV, film, toys etc.) is what the company has the potential to achieve commercially, so it will be fascinating to see how” the team chooses to do so.

Peter Farago, vice president of marketing at analytics firm Flurry, said the only thing that comes close in numbers is the Draw Something game, created by OMGPOP (which was promptly acquired by Zynga), which took five weeks to get to 20 million downloads.

Jeff Scott, editor of 148Apps Network, said, “It’s great that it still has such life left in it. Rovio has said that it is bringing three to four additional Angry Birds games out this year. If they continue to pull these huge numbers they may well be on their way to (their stated goal of) ‘being bigger than Disney.'”