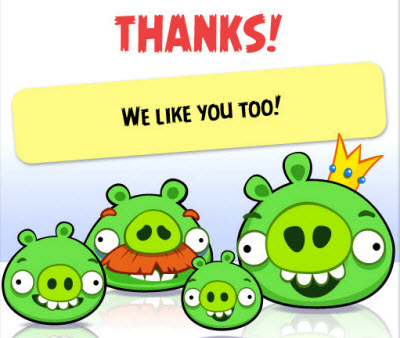 Angry Birds, the mobile game phenomenon created by Finland’s Rovio, is headed to Facebook in the next month.

The Angry Birds fan page on Facebook says the game will come to the social network in the coming weeks. That could dramatically widen the audience for the game, as Facebook has more than 600 million users. It could also generate a lot more revenue, since good games tend to spread in a viral manner on Facebook and generate considerable sales of virtual goods. Rovio has shown that game companies can come up with huge hits using a “mobile first” strategy, but moving to Facebook makes a lot of sense since Angry Birds has proven to be a hit on every platform where it debuts.

Angry Birds has had well over 75 million downloads since it launched on the iPhone in December, 2009. The paid version of the game dominated the App Store for a year and continues to sell well. Angry Birds is also available on Android, WebOS (Palm), Symbian, Windows, the Mac OS X, and the PlayStation Network. The game has proven that it’s possible to create a mega-hit in a very short time in the new world of smartphones, tablets and mobile devices — even without the natural virality of Facebook. Angry Birds is so popular as a cultural phenomenon that celebrities like Conan O’Brien are glomming onto it, making themselves look cool in the process.

Now the company is turning the hit game into a franchise not unlike Nintendo’s 25-year-old Mario character, spreading the cute little birds with the angry eyebrows far and wide into plush toys and other media. In the game, the green pigs (pictured) steal the eggs of the birds, who become angry and slingshot themselves at the fortresses of the pigs. The title is simple to play, since you just pull your finger along the surface of the touchscreen to aim the slingshot.

It will be interesting to see how Rovio can adapt the game to Facebook, since most computers don’t have touchscreens. Angry Birds is also slated to come out on the Wii and Xbox 360. And Rovio is releasing a new version of the game to come out as a promotion for the animated film Rio.