If you had fun and enjoyment out of that, Amiibo Festival may then be for you. If not, you should look elsewhere.

Animal Crossing: Amiibo Festival for the Wii U is the second Animal Crossing spinoff released this year, after the earlier Animal Crossing: Happy Home Designer for the 3DS. Where that was an interesting spin-off that expanded a core idea in the series, Amiibo Festival is a shallow, boring, and random experience that’s entire existence seems to be to get players to purchase more of Nintendo’s interactive figures. 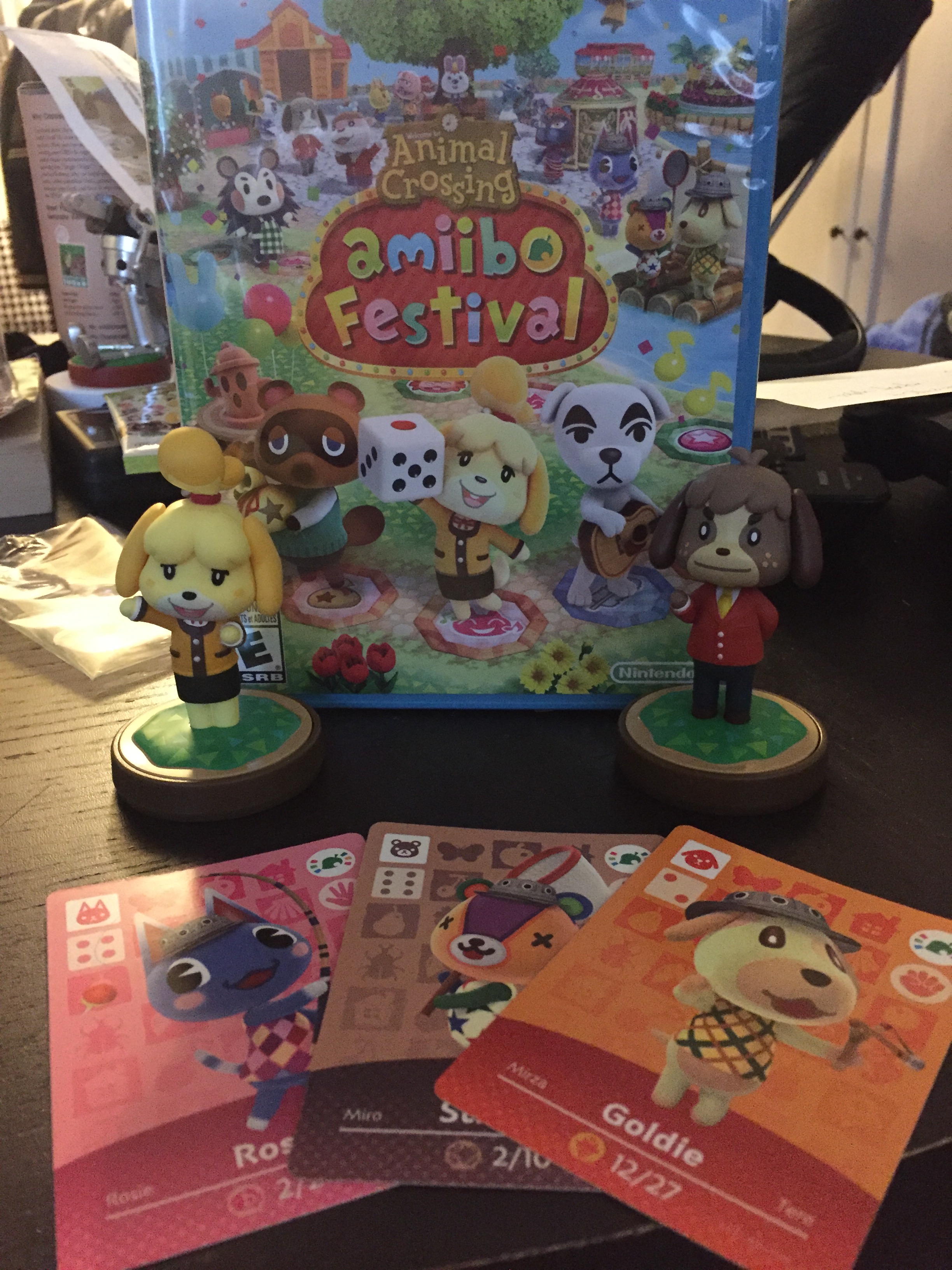 Above: Everything in the Amiibo Festival bundle.

Amiibo Festival is a mindless exercise that tries to take the cute and creative world of Animal Crossing and shoehorn it into a board game with no context. The player is almost entirely inconsequential, and the result is a random celebration of happiness rooted in a game devoid of fun, happiness, or merit.

The minigames are the best part

The Amiibo card-based minigames (a meager eight) are probably the best part, but that’s not saying much, and they aren’t nearly enough to make up for the other game mode that you have to go through to unlock them (or to justify the $60 price). Some of them even require you to purchase additional Amiibo cards, as some of the games need more cards than the three Amiibo Festival comes with.

Most of these games probably wouldn’t have even made the cut for a really bad Mario Party. Of the bunch, the best is probably an island escape adventure that actually has different levels you can play and also mostly ignores the Amiibo cards. But even in that, most everything you do is decided by roulette spins and luck, a theme that runs way too heavily throughout.

It also has Animal Crossing quiz show that tests your knowledge of everything Animal Crossing. It’s tough and actually has some teeth (can you identify gyroids and fish by sight or KK Slider songs just by hearing them?), and it’s also one of the easier games to earn tickets to unlock other things with. But even that mode gets tricky with multiple players with only one GamePad, and I already started to run into repeat questions with my time in the game. But at least it’s something. 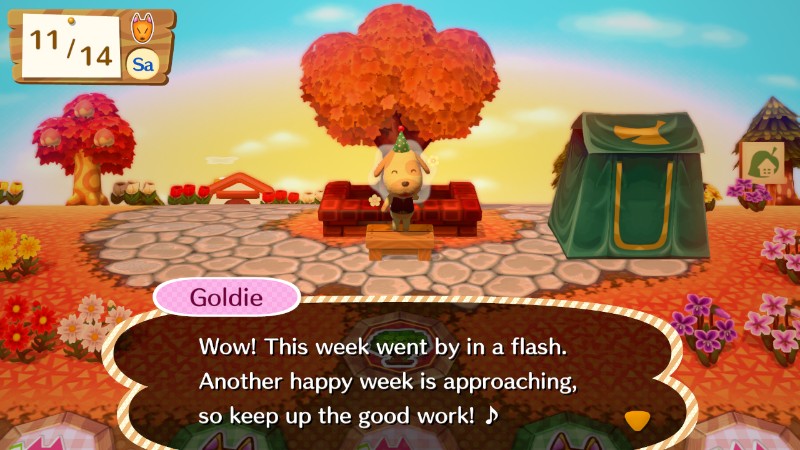 Above: If only the game actually did go by fast.

At any rate, the few decent minigames aren’t enough justification for a purchase even if you account and remove the price of the Amiibo, and most of them you wont want to come back to more than a few times. But you also have to play a bunch of the main board game mode in order to start unlocking these games. Let’s talk about that.

Pretty much everything else

That being said, don’t buy this game.

The main game mode for Amiibo Festival is the game board. Using your Animal Crossing Amiibo (the figures, not the cards!), you roll dice and travel across a board. It’s Mario Party-like in spirit, but not in execution. As the game puts it, good things happen on pink spaces, and not-so-good things happen on purple spaces, as you try to collect bells and happy points.

My first game board was November themed (each sessions lasts as long as an in-game month, which varies from 45 minutes to over an hour, depending how many people are playing). I tapped my Amiibo to roll the die. I rolled a 1. Isabelle walked one space and landed on a happy, pink space. I saw a little message that Isabelle started a cooking class. I got points. I did nothing for them.

And that’s the game.

Instead of something to test your skill, like Mario Party, you pretty much randomly move across the board and randomly either win or lose points, all accompanied with short displays of characters doing random tasks, most themed to the Animal Crossing universe. I looked up at a meteor shower too long and hurt my neck. Minus 1 happy point!

Even the little displays got old fast, and in my first game I was already seeing repeats. 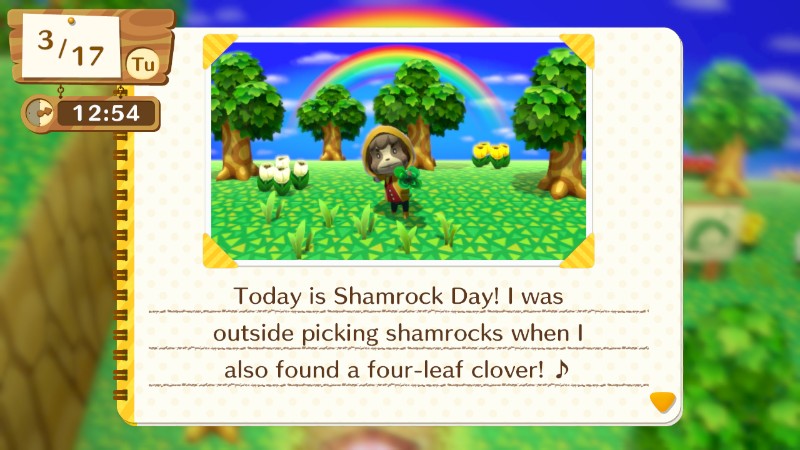 Above: Various random events like this will decide your fate throughout the game.

When playing alone with three computer players, you also get to watch the computers entire turn. What results is a boring affair, and a game where I had almost no control over my fate. I spent most of my time rapidly hitting buttons in a haze of dice rolls hoping it would speed up the A.I. turns (it didn’t) while I fought the urge to fall asleep.

Special guests from the AC universe do make appearances: Katie, Joan, and Franklin. But the events and special appearances are (mostly) as superficial as the game itself. Luck decides Fishing Tournaments. The holidays (usually a lot of fun in other AC games) I encountered also played out randomly depending on what spaces you land on. The stalk market is the only area of any real strategy, but victory there is still entirely random and at the whim of the game.

After surviving this mode for a second time, you unlock the ability to purchase the other Amiibo card minigames with happy tickets. Imagine if Mario Party had no minigames in it, and instead you had to just roll dice around a board to unlock the few actual games that it did have. That’s pretty much the idea.

Most of the minigames are all degrees of superficially shallow or decent ideas implemented poorly, like holding the Amiibo card on the GamePad and letting go when you want to drop your character on a bunch of balloons. It also fizzles with a camp-themed game that is pretty much which cup is the ball hiding under combined with a logic puzzle from math class and a two-player game where you have to play a higher or lower numbered card than the other player. Yup.

The one idea that unites all of them is that they are trying really hard to force some type of interaction with the Amiibo cards. The cards really aren’t meant for players to scan in such a fast fashion, like in the whack-a-mole-like game in which the GamePad reads the cards. I actually had some responsiveness problems with how fast the NFC scanner had to work. It sometimes would pick up a card when I didn’t want it to, or vice versa. It’s probably the reason that most other games don’t require lightning-fast scanning of Amiibo.

After your third board game, you can unlock customizations for the game board, including the ability to bring over the exterior of animal’s houses from Happy Home Designer, animals to help you with dice rolls, as well as town works like additions and new paths for the game board. They all cost tickets though, of course, which means more playing to unlock features. It’s just too little, way too late to keep me interested in the mode.

A festival of errors
If both of the games were paintings, Amiibo Festival makes Mario Party look like the Mona Lisa.

Nintendo knows people want Amiibo, and it knows people like Isabelle, and the only way to get her and Digsby is to buy this game. Don’t fall for the trap. The fact that the game is $60 when it barely has enough content to be considered a less-than-stellar minigame collection is horrendous.

One of my good friends asked me if buying Amiibo Festival was worth it just for Isabelle. No, I don’t think it is. If you really want the Amiibo figures, import them. And when one of the best things about a game is the two figures it comes with, well, that says it all. The board game mode could be scrapped entirely, and some more effort (and more minigames) could have made this an AC spinoff worth having in the vein of Mario Party or Nintendo Land. But it isn’t, and don’t let the Amiibo tempt you into getting it.

All along, the developers said Animal Crossing: Amiibo Festival existed just to justify cute AC Amiibo, and it really shows. It’s almost like Nintendo wouldn’t let the development team release Amiibo without some game attached to them, so they threw together something quickly to justify the figures’ release. It’s easily one of the worst Nintendo titles I’ve played and as a “game” is devoid of merit and doesn’t otherwise justify its existence.

It’s a blatant attempt to get you to buy more Amiibo, and it’s not even a good one at that.

Animal Crossing: Amiibo Festival was released for the Wii U on November 13, 2015. The publisher provided GamesBeat with a copy of the game for the purpose of this review.