Animal Crossing: New Horizons is a tough game to assess. I’ve played around 60 hours since Nintendo sent over the download code in late February. But even if I had played 300 hours, I would still struggle to review Nintendo’s social-life simulator. That’s because the point of Animal Crossing is to play it consistently over the course of months and even years. And I can’t time travel. But even with that caveat in mind, I’m still confident in making this claim: this is the best Animal Crossing game yet.

Like past games in the series, New Horizons is about moving into a village with other animals. You get a house, you pay off the loan to a raccoon named Tom Nook, you get a bigger house to add more decor, and so on. The idea is to live a life inside a pleasant virtual town. That structure is back, but with New Horizons, Nintendo has added to and refined the Animal Crossing formula. And the result is more gripping than ever.

Animal Crossing: New Horizons launches March 20 for $60 on Nintendo Switch. It’s a series that I’ve appreciated from the beginning and then loved with New Leaf on 3DS in 2013.

Now, let me explain why it’s so wonderful.

Animal Crossing: New Horizons has the best new-game experience yet

On the first day in Animal Crossing: New Leaf for the 3DS, you could hit a pretty hard wall. The game withholds several basic tools and mechanics until later days. After the first hour, you could find yourself wandering around with nothing to do. This wasn’t a long-term problem, but it reveals a major contrast with how Nintendo approached this sequel.

New Horizons is much better about getting you into the flow of Animal Crossing. The first day when you start a new island is untimed and unrelated to the real-world calendar. This tutorial section gives you a chance to get familiar with some of the core mechanics. It guides you to features like crafting, catching fish and bugs, buy and selling goods with bells, and earning Nook Miles.

By the end of the introduction, it throws you back into the real-time game. And you can keep playing without running out of things to do. I think this is going to lead to New Horizons “grabbing” more people that bounced off of previous versions. 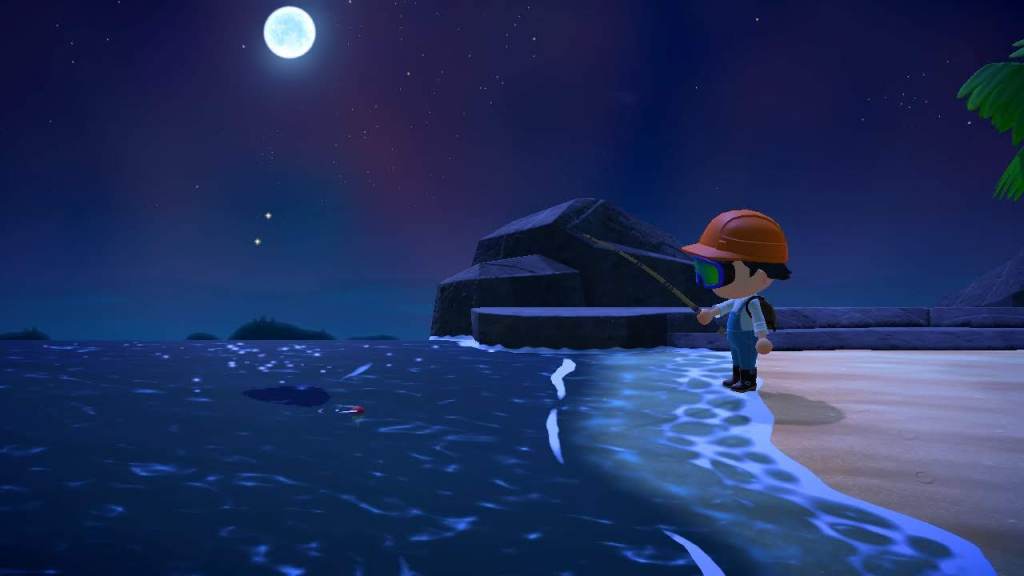 It gives you big and small goals to work toward

New Horizons also has a great system of putting goals in front of the player.

If you ever feel lost or confused about what to do next, you can go ask Tom Nook. He’ll point you toward some goal that you can work toward that will unlock more aspects of the game.

Early on, these goals are very simple and manageable. These include crafting your first tools, picking home locations for villagers, and getting enough Nook Miles to pay your moving fees.

They then get progressively more complex and larger scale. You’ll have to collect specific materials to craft certain pieces of furniture for some of the new villagers you invite to the island. Or you’ll have to get a huge set of materials to help Tom Nook’s capitalist nephews build their first shop.

In a later quest, you’ll have to improve the overall look and feel of your town by adding infrastructure and decor. On my island, I’ve added some bridges and a ramp up to the higher elevations. I also built a playground on the beach with a jungle gym, slides, and rocking horses. Eventually, I’ll improve the appeal of my town enough to attract a very special guest.

Doing everything gets you a reward

But New Horizons doesn’t just rely on a strong start and then guided goals to keep people playing. It also has a wonderful moment-to-moment reward system with the new Nook Miles program.

This is a secondary currency that is separate from bells. You still earn bells by foraging and selling things in the store. Nook Miles, however, are a reward for doing everything else.

Everything you do in New Horizons will contribute to filling up meters in your Nook Miles app on your Nook Phone. Water 10 flowers, and you’ll earn some Nook Miles. You’ll also get some for chopping down trees, fishing, and talking to your neighbors.

These are things that people do in Animal Crossing anyhow. But New Horizons incentivizes players with tangible rewards. because of this, I’ve found myself doing things like managing a flower garden. That’s something I would have skipped in previous games, but now I get something out of it. But I also get Nook Miles for fishing, which is something I always love in Animal Crossing.

Eventually, you’ll unlock daily Nook Miles challenges that come with bonus multipliers. So even as you move past the first two tiers of catching fish and have to wait to get a bonus until you catch 500 or more, you’ll get a smaller challenge that will reward you for catching five fish before the end of the day.

Nook Miles makes it so you are always working toward something, and that makes everything in the game more enjoyable.

Even though New Horizons gives players more to do on the first day and beyond, it still holds so much back. In previous games, you had less to do from the start and fewer major goals to work toward. New Horizons is the opposite in both respects.

Instead of waiting to get a fishing rod or other tools, New Horizons makes you wait to unlock other parts of the island. This gives you more space to build, and it even unlocks mechanics like digging for fossils. 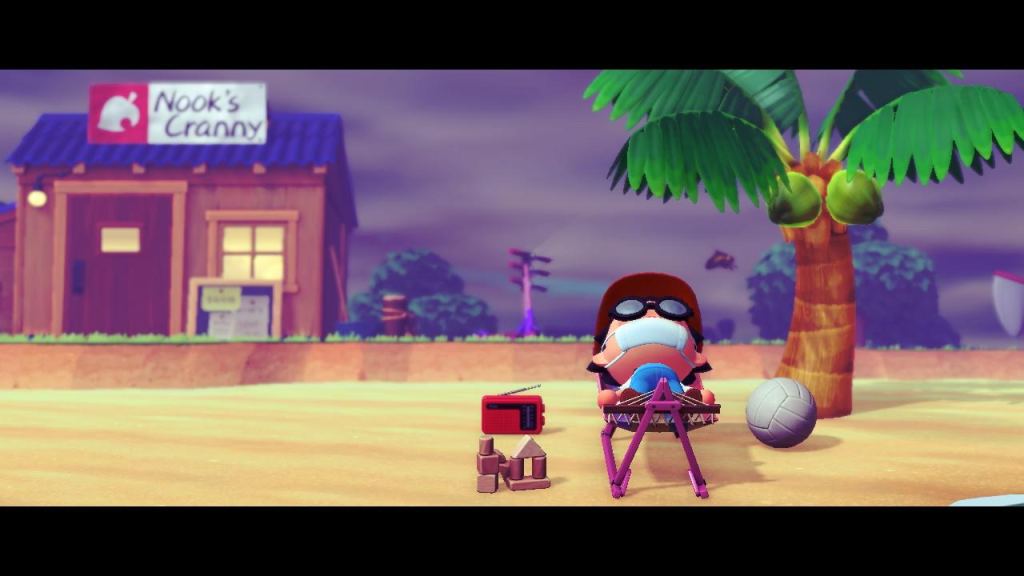 But New Horizons even has a progression system that makes the game more playable. For example, you start out with the option of only donate one critter at a time to the museum. But if you help entice Blathers, the owl who runs the museum, and help him build the actual museum building, you can donate multiple specimen at a time.

Players can also redeem Nook Miles to unlock user-experience features. There’s a quick-select wheel and a skill to increase the size of your pockets in the Mileage store.

This progression combined with the Nook Miles program, the short- and long-term goals, and the quick start make every session with New Horizons feel eventful and rewarding. The game gets easier over time, but as you get more capable you can take on bigger tasks. It’s exquisite design that sets this game above its predecessors.

Crafting is a great way to fill out your schedule

One of the big new additions Nintendo made to Animal Crossing: New Horizons is the crafting system. This enables you to collect materials like wood, stone, clay, iron, weeds, and more to build furniture and tools.

I was worried that this system would replace some of Animal Crossing’s classic loops. But that’s not how it actually works. Instead, crafting is complementary. It fills in a part of the game that was empty instead of replacing something else.

So now you’ll still spend a lot of your day fishing, catching bugs, talking to villagers, and more. But you will also want to find out what the “hot item” at the store is that you can craft and sell for twice its normal price.

But now, when the store closes and all the villagers go to sleep, crafting gives you something to do late at night. You can go around the island collecting materials for the next day. Or spend those hours crafting furniture to decorate your home and island.

Crafting is additive and feels like something that was always a part of the series.

The fruit stacks by itself! Not much else to say here. In previous games, you had to drag the fruit on top of one another by yourself. Here, the fruit auto-stacks. Welcome to the future.

New Horizons still looks like Animal Crossing. It has the same simple style as the previous games, and characters like Isabelle still look the way you remember from New Leaf. But the game is now in HD, and everything looks crisper than ever.

Still, I think that New Horizons does a great job with establishing an atmosphere. Its ambient sounds and music are like if you turned a Chill Vibes YouTube playlist into a video game. This sort of thing is really noticeable when the breeze starts picking up or the weather turns hazy or rainy.

One of the reasons I can play this game for hours at a time is because it’s just so pleasant. I love running among the trees and listening to them rustle in the breeze while they sway with a satisfying animation. It’s a nice place to visit, and I always want to go back.

New Horizons is a friendlier game than previous Animal Crossings when it comes to the user experience. Note the aforementioned auto-stacking fruit. And a lot more of the shopping happens in a menu. You can also edit the layout of your house using an awesome drag-and-drop system.

It still has some clunkiness, though. I’ve accidentally almost purchased an item when I was trying to talk to Timmy Nook in the shop. Crafting (and this could change if I get a better crafting table) is only one item at a time. And you have to go through the menus and confirm everything each time. As far as I know, you can’t put items into a queue and walk away.

Nothing is so detrimental that it ruins the fun, but it’s occasionally frustrating. 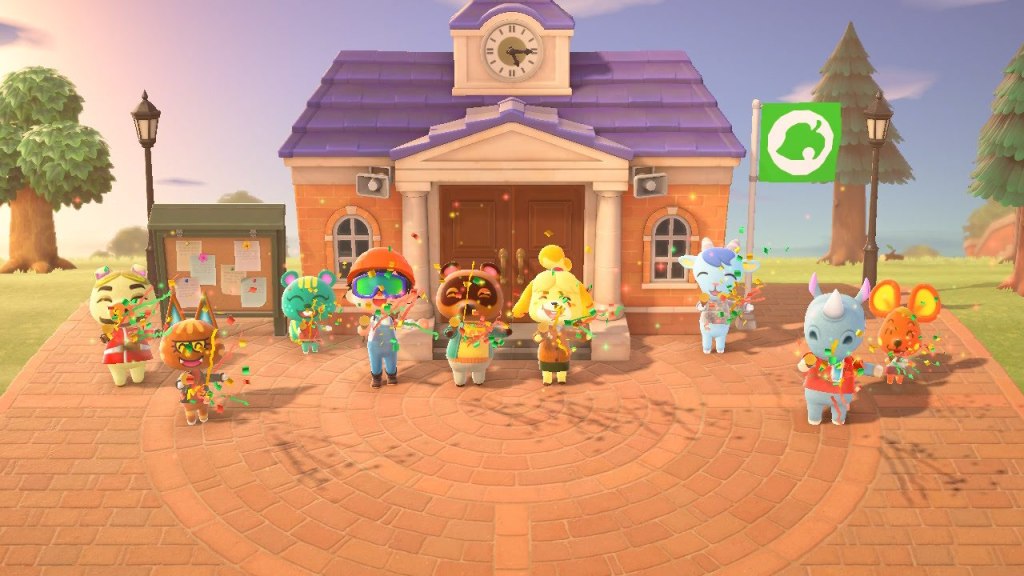 Above: Time to celebrate in Animal Crossing: New Horizons.

The save system really is a mess

I’m stuck on my Switch Lite. I know Nintendo says it will let us later transfer Animal Crossing: New Horizon to new systems. But that’s still not going to fix my problem. I want to play primarily on Switch Lite, and then I want to take my character onto my original Switch and visit my wife’s island. But I can’t.

If I use my account on that Switch, I have to start a new character that lives on that island and has nothing to do with my Switch Lite character.

This is just my specific problem, but I think other people will encounter a number of other hurdles because of the way Nintendo built New Horizon.

The problem for me is that islands are tied to the device and not to accounts. So even if you can transfer your save to a new system, you’re going to have to move the entire island. That’s not going to help people who started playing on a shared system but then each want to continue playing on their own individual Switch consoles.

This also doesn’t really ruin the game, but it is going to cause headaches for a lot of people.

The best thing I can say about New Horizons is that I think it’s going to win over some players who previously bounced off the franchise. And it will do so without losing any longtime fans in the process. Those players will find more to love than ever before.

Animal Crossing: New Horizons launches March 20. Nintendo provided GamesBeat with a downloadable review code for the purpose of this review.