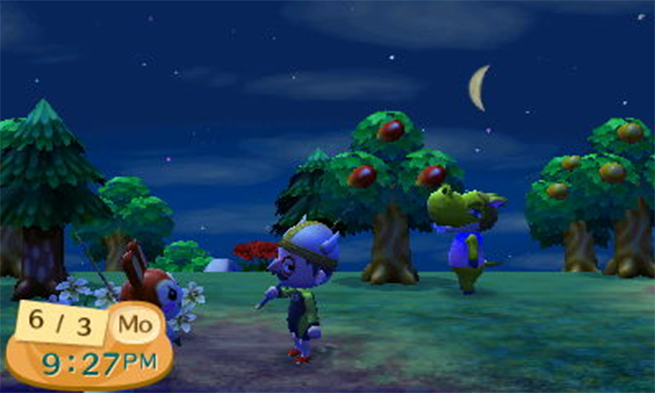 Animal Crossing: New Leaf is simultaneously timely and completely incongruous with today’s gaming market. The franchise is more than a decade old, but it feels like Nintendo slowly fashioned it in a furnace labeled “free-to-play gaming mechanics.” It isn’t free, of course, but it has all the hallmarks of that business model.

This makes no sense, and I adore it for that.

As with Mario, Pokémon, and Zelda, Animal Crossing is one of those Nintendo foundation franchises. New Leaf is the fourth go ’round for the series. This time, the familiar action takes place on the company’s 3DS portable system, and it comes out Sunday.

Despite the franchise’s age, Nintendo barely touched its gameplay and visuals. Sure, New Leaf has a few new mechanics, and the graphics are sharper, but this is just a refinement of a very old product.

But motion is relative, and while many would argue that Nintendo is getting left behind by standing still, Animal Crossing: New Leaf left me feeling that the exact opposite is true.

I know it’s not fair to compare a free-to-play game to a retail release, but it’s impossible to avoid in this case. The popular F2P business model is now a standard. Developers seem to love it, but — as gamers — I don’t think we’ve really decided whether it is good for us.

Animal Crossing is compelling evidence that it isn’t.

In Animal Crossing: New Leaf, you play as the one human resident in a town of anthropomorphic animals. Due to a misunderstanding, those citizens immediately appoint you as their new mayor. This gives you a few powers to control certain aspects of the village. Like the previous Animal Crossings, you will get a tiny house that you can slowly furnish and expand by purchasing items and paying off your loans. That means you’ll need a lot of money, called bells, which means you’ll need a net to catch bugs, a fishing rod to fish, and a shovel to plant fruit trees.

This is where Animal Crossing aligns with most of today’s free-to-play games. It isn’t skilled based. You are churning through mechanics that simply require your time. The fishing, for example, is just a roll of the dice. You throw your lure into the water in front of a shadow (which represents a fish), and you hope that you pull out something worth some major bells.

Harvesting fruit is similarly time-consuming. Each tree takes four days to produce its prize — and that’s in real time because Animal Crossing runs on the same clock as the real world. This means you’ll bounce between having nothing to do and too much to do.

However, unlike every free-to-play game, Animal Crossing escapes the underlying feeling that it is always trying to squeeze your pressure points in the hopes that you’ll pay an extra buck or two in microtransactions.

New Leaf costs $35. That’s it. Once you give Nintendo those 35 American dollars, every single piece of content inside New Leaf belongs to you. All you need to do is to put in the time with the game to unlock them.

After a parade of Facebook and mobile games with countdown timers that encourage players to pay 99 cents to unlock the next level faster, New Leaf feels so respectful.

It doesn’t want you to have to think about Nintendo’s business model — it just wants you to get lost in its amazing world.

A unique sense of place and wonder

I got to a point in my first couple nights with New Leaf where my character wasn’t wearing shoes. We were running through the town in the dead of a spring night. We were fishing and catching bugs. I had the 3D and the sound turned all the way up. I was transported.

If heaven is real, I hope it is exactly like Animal Crossing.

It’s a combination of the tranquil pace, the sound design, the friendly characters, and the welcoming look of the world that is so appealing. You have to spend a ton of time in the game, and it’s a joy to spend time in.

That’s not new. Nintendo always nailed the atmosphere of this series. The 3D is new, and the company puts it to excellent use. The visual depth adds a credibility to the world that I found deeply attractive.

I play all my 3DS games with the 3D on, but I get why a lot of people don’t. For this game, I can’t imagine playing it without that extra dimension.

Animal Crossing is all about expressing yourself in a self-contained little world, but it is also about sharing those expressions with friends. In New Leaf, you can do that in one of two ways.

Players can visit each others’ towns using local wireless or over the Internet (as long as you exchange your 3DS friend codes). This adds a natural social mechanic where you’ll want to find out who has what kind of fruit, what kind of gear your friends’ stores have, and whether they want to trade some clothing designs.

Of course, it’s not always easy to get players together at the same time. Your town doesn’t live perpetually online, so it is only open to visitors when you set your gates open.

The good news is that Nintendo also included some more traditional social features, including Twitter and Tumblr support. Animal  Crossing players can take a picture in game at any point by holding down the L and R buttons simultaneously. You can then use the 3DS browser to share those photos to their social networks. We explain the whole process here.

It’s excellent for people who spend their time creating designs.

The occasional overwhelming sense of sameness

I felt like I could get back into Animal Crossing again after not touching one since 2005. I was right, but even so, this is the same game. That might really dampen the experience for some people. If you exhausted this franchise with a previous release, then I doubt you’ll find much worth exploring this time around.

I don’t know what I would have had Nintendo change, but I feel like this is a franchise they could take a lot more risk with. That they try almost nothing new is really disappointing.

What’s even more frustrating about Animal Crossing’s stagnation is that Nintendo doesn’t just keep the good stuff. The decrepit inventory management, conversation system, and interface design also all made the jump to the 3DS.

Every little action in this game take just a few too many button presses. Donating fossils to the museum requires you to first get the curator to identify them. If you have more than one, he doesn’t let you automatically contribute them. You have to advance to another menu where you can finally hand them over.

Menus to purchase items are all nested in conversations as well. So that means you’ll always have to run through the dialogue to make a purchase. If you’re holding the stylus, you can use it to select options, but it doesn’t give them to you in big boxes like the recent Pokémon titles. Instead, you have to click on tiny text prompts that are difficult to hit.

This outdated design exists throughout. I think the designers might believe it has some kind of charm, but if it does, it didn’t work on me.

Animal Crossing: New Leaf is a delightful way to spend a lazy afternoon. It does have stagnation issues — this is basically the same thing we played on GameCube, Nintendo DS, and Wii — but the magic is still real.

Still — it’s hard not to view this aged franchise with awe. It eschews all the monetization, player-engagement, user-acquisition crap that modern developers like Zynga are obsessed with, and instead it presents a complete experience for one price. That’s hard to reconcile with the constant push for additional revenue streams you get from nearly every other publisher.

That absence of DLC and microtransactions makes Animal Crossing a gameplay refuge. It stands apart from what gaming has become.

Many argue that free-to-play removes the barrier to entry and enables more people to experience amazing games. Yet Animal Crossing: New Leaf proves that maybe free-to-play builds up new barriers within the games that prevent us from truly embracing and loving the experience itself.

I hope Nintendo never stops making games like this.

Animal Crossing: New Leaf is due out June 9 on 3DS for $35. Nintendo provided GamesBeat with a digital copy for the purposes of this review.