Nintendo has updated Animal Crossing, which means it’s time to head back to your town and … oh, my god! My animal friends are going to hate me for never visiting!

The update introduces a few key features including Amiibo support to give fans a reason to return to the 2012 social-life simulator. Using the Animal Crossing-themed Amiibo cards, players can invite new villagers to their town who may bring with them playable minigames. But while that’s exciting, I’m more interested in what Nintendo has done to reduce some of the guilt I will feel about returning to Animal Crossing after … I don’t even know how long. I had relationships with those anamorphic monkeys and owls, and then I abandoned them.

As you can tell, I have some issues.

To help salve my conscience (and those of many other Animal Crossing players), Nintendo has made some small tweaks to make it more welcoming for returning villagers. This includes a train sequence to introduce the new features at the start and instant weed removal so you don’t have to spend the first hour of your return visit gardening. It also has a storeroom that should help alleviate some inventory-management anxiety, and — finally — touchscreen controls for decorating your house.

While that all sounds wonderful, I won’t know how I will feel about returning until I give it a try. So let’s head back to GrubPort! 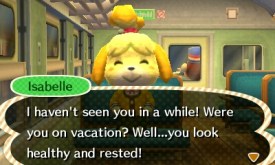 Above: No! Don’t look at me, Isabelle! You’re so pure and kind, and you should hate me!

Updating Animal Crossing only took a few minutes, and it now greets you with an new title screen. “Animal Crossing: New Leaf — Welcome Amiibo” is what you’ll see when you boot up. The next thing you’ll see, if you decide to return to your established save file instead of taking the coward’s way out of starting something new, is your good friend, Isabelle. That loyal confidant joins you on the train to break down some of the new features, and this was my first opportunity to panic.

Isabelle is a fan favorite for a reason. She is always cheerful as part of an effort to disguise some underlying anxieties that occasionally breakthrough to the surface. But she really just wants to help you run the town, and I felt the pressure of potentially seeing her disappointment as she spoke to me.

But Isabelle is always delicate. When she pointed out that I hadn’t visited in quite some time, she asked if I was on vacation. That was an expert move. She and I both know I wasn’t on vacation … I was playing Doom. But she still gave me the opportunity to tell a white lie to avoid dealing with my absence head on.

After breaking the ice, however, I got right back into the swing of things with Isabelle. She told me all about Amiibo support and Meow coupons, and then she sent me on my way.

The boy is back in town

When I was free to explore the town, I was happy to not have to deal with weeds. It’s my understanding that the pesky flora will return in the future, but Nintendo has introduced daily bonuses to the game that will often involve performing tasks like pulling weeds.

I still had a lot of other crap to take care of, though, and I was starting to feel that nagging guilty sensation climb into my fingers. Instead of closing my 3DS, I pushed on just to see what else was new and to store the random furniture in my inventory into the storeroom. But it wasn’t really enough.

The problem is that I was seeing all my old villager friends walking around, and I was too afraid to speak with them. They had certainly noticed my absence, and many of them aren’t as diplomatic as Isabelle. It’s at this point that I have stopped playing Animal Crossing anytime I picked it up in the past. But I decided that I was going to write about the update, so I should at least talk to one of them.

So I approached Shari, a lady primate that I remembered had something of an outspoken temperament. And, of course, she let me have it. 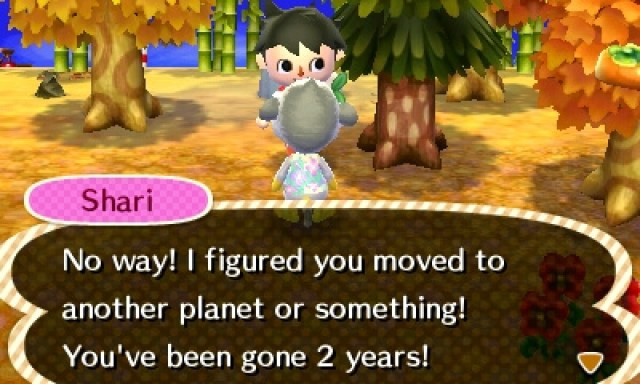 Above: I’m so sorry!

It was rough. Two years? Had it really been that long. I grabbed that screenshot, and I shared it to the Nintendo Miiverse to show everyone my shame, and then I put it down for a while to do some work.

But then as I started writing this story, I decided to pick up the 3DS again to see what else Shari had to say … and that was exactly what I needed. After giving me a slight scolding, Shari immediately shifted into a ribbing, familiar tone to let me know that it was OK that I wasn’t around. And she even used the “Bum!” slang term I remember teaching her when I was first playing the game. 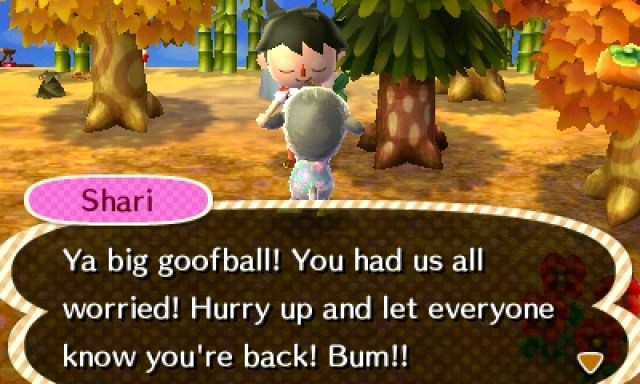 This part of Animal Crossing isn’t new. It’s the core of the franchise going all the way back to the original that I played on the GameCube. It’s moments where Nintendo’s great writing that infuses personality into every character comes together to show the impact you have on these villagers.

Sure, I still feel guilty, but my quick interaction with Shari reminded me why I had anything to feel guilty about in the first place.

I’m going to try to stick with Animal Crossing for a while this time around. Nintendo has made it easier to get back into, and I’ll find out if it has done enough to retain me.

But for now, I’m just glad to be back hanging out with Shair and the rest of my peeps.