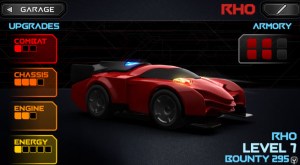 Above: Anki now has 20 major upgrades for its cars.

The company launched its iPhone-controlled racing game in October and it has launched a major software upgrade for the game. Anki showed off these new features at the 2014 International CES tech trade show in Las Vegas. The company was in the gaming showcase at CES and showed off demos of the cars behind closed doors.

With Anki Drive, you use your iPhone to control a race car in competition with other artificial intelligence-driven cars speeding around a physical track. The track detects the car’s location and movement 500 times a second.

With Anki Drive, you roll out a mat on the ground that serves as a race track. You can place two cars down on the track that will start driving around on their own. Then those vehicles will adapt and learn how to compete better. You can then control the game through the iOS app, which enables you to steer your own car and fire vehicle weapons. While the cars can keep themselves racing around the track, you can make them do tight or wide turns.

About nine times out of ten, the AI can beat a human when the game is on its hardest setting.

Founded by robotics experts at Carnegie Mellon University, Anki has worked on the technology for six years. It has raised $50 million and it has 60 employees.

Here’s our video of a demo of the latest features of Anki Drive, as demoed by Sofman. Anki Drive works with the iPhone 4S and up, the iPod Touch (fifth generation and up), the third-generation iPad and up, and the iPad Mini.

The company’s backers are Andreessen Horowitz, Index Ventures, and Two Sigma. The name Anki means to “learn by heart.”