Are reliable, affordable home robots destined to remain the stuff of Jetsons reruns? The market’s current trajectory has certainly begged the question. Bosch subsidiary Mayfield Robotics just this month put the kibosh on Kuri. LG’s CLOi home assistant suffered an embarrassing failure on stage at the 2018 Consumer Electronics Show. And a family-run Scottish grocery chain pulled SoftBank’s Pepper from stores after it struggled with customers’ dialects.

None of those failures, however, discouraged the team behind robotics company Anki from pursuing the dream — least of all Mark Palatucci, who cofounded the company with Boris Sofman and Hanns Tappeiner in 2010 and now serves as head of cloud AI and data science. He remains committed to the idea that someday every household will own a robot, and he’s hoping Vector is a small step toward that vision.

Vector is Anki’s third foray into the consumer robotics space — its first being Anki Overdrive, a slot racing kit with cars that players control with their smartphones. The second is Cozmo, a toy robot that plays games, teaches programming fundamentals, and reacts to situations as a human would.

Outwardly, there’s very little to distinguish Vector from Cozmo — they have in common a tank-like body with a miniature lift and treads — but on the inside, it’s a different story. 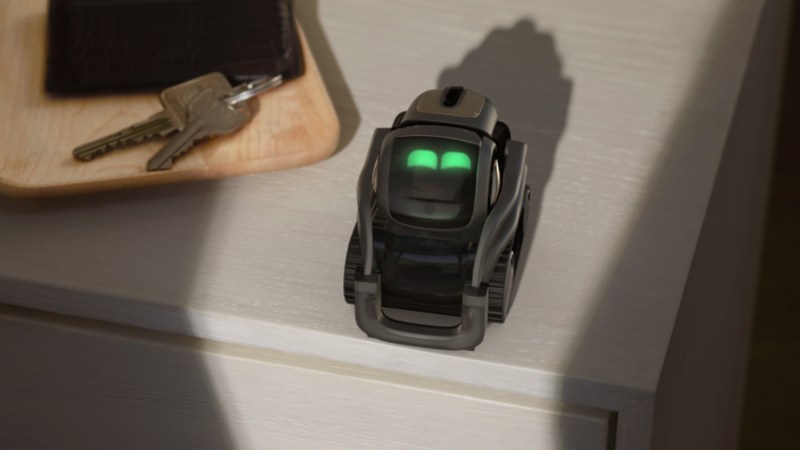 “Robots aren’t just utilitarian and functional, but can be fun and friendly. You can have relationships with them.” Palatucci said, gesturing toward Vector. From the little robot’s bright and cheery appearance, I was inclined to agree.

Palatucci and I were videoconferencing ahead of Vector’s unveiling — he from Anki’s San Francisco offices, I from New York City. The discussion turned to the proliferation of smart speakers like Amazon Echo, Apple’s HomePod, and Google Home, which some analysts predict will be installed in a majority of U.S. homes by 2022.

“There’s a big explosion for the first time in consumer AI — a revolution in virtual assistants,” Palatucci said. “These technologies have matured to the point where they’re having a massive impact on the market. It’s easy to see that we’re barely scratching the surface.”

The unexplored potential was the motivating force behind Vector, a slick, diminutive robot with a minimalist but decidedly futuristic aesthetic. Underneath its polished exterior are more than 700 components — more than twice the number that make up Cozmo.

Vector’s small form factor stands out in a field crowded by large and life-sized robots like Jibo, Asus’ Zenbo, and Temi, but the decision to go small was deliberate.

“There’s an uncanny valley in robotics,” Palatucci explained. “People are more hesitant and reluctant around bigger machines. When you combine them with quick movements, there’s a creepiness factor, and the size affects people’s expectations of what it can do.”

Instead, Anki’s engineers went for cute and endearing.

“The design goal was to make something that would live in people’s home 24/7,” he said. “We discovered what people wanted was a robot sidekick from the movies, so [Vector] has all the things a robot needs to be able to understand where it is in an environment. We’re trying to bring [it] to life in a way that’s emotive and expressive.”

It takes a lot of tech to make Vector tick.

The robot’s silicon heart is a Qualcomm ADPQ8009, a quad-core, 1.2GHz system-on-chip with an integrated processor, graphics chip, and low-power image coprocessors. There’s a high-resolution IPS display onboard, and two sets of light sensors — a single-point time-of-flight laser scanner and four downward-facing infrared sensors — that detect walls and precarious desk edges on the horizon. Other windows to the outside world include an HD camera with a 120-degree field of view and a capacitive sensor, plus an array of four microphones with support for noise cancellation, direction finding, and beamforming.

The hardware’s only part of the equation, of course. Vector’s designed-from-scratch operating system employs artificial intelligence for tasks like object detection and object classification (in fact, one processor core is dedicated exclusively to them). Simultaneous localization mapping (SLAM) and pathfinding algorithms running locally, on-robot, help it make its way around obstacles. And a custom voice recognition engine lets it respond to commands. Vector expresses himself through a melange of doodads and gizmos. The screen is its “eyes,” so to speak — two pixelated pupils light up when its camera recognizes a friendly face and narrow in frustration when it loses one of the several games it knows how to play. The microphones act as ears: Say a command preceded by the phrase “hey, Vector,” and it’ll source Anki’s cloud-stored knowledge graph to find the response.

Voice, in fact, is intended to be the primary means through which you interact with Vector. There’s a companion smartphone app that pairs the robot to a local router during initial setup and exports photos taken with Vector’s camera. But that’s the extent of it — starting most activities requires speaking a word or phrase.

At launch, Vector won’t do much in the way of voice beyond setting timers and answering questions about the weather (with rain cloud and sunshine animations on its screen) and spouting factoids about real-world people, places, and things. (At least a few of those features are powered by undisclosed third parties.) But Palatucci said that they’re just the start — features in the works includes music recognition, security camera integration, notifications, news briefings, calendar appointment reminders, and messaging.

“We explored putting third-party interfaces into robots and found that having to say a hotword [like ‘Alexa’ or ‘hey, Google’] felt awkward and mechanical,” Palatucci told me. “We’re not trying to make Alexa come through Vector. We want it to feel more personal — more emotional.”

Animations help in that regard — lots of animations. They were crafted by a 12-person team overseen by Carlos Baena, a former Pixar animator with 14 years of animation experience, and are built within Autodesk’s Maya. It’s a computer modeling suite that allows the animators to fine-tune Vectors’ motor movements in real time, which Anki’s in-house toolchain translates to the physical world.

“When they hit play, they can see the robot doing the same movement on their desk. That allows them to create really expressive and nuanced behavior,” Palatucci said.

It’s a powerful stack. Animators have precise control over the motors’ degrees of freedom, and the ability to specify different velocities, accelerations, and trajectories. They’re also able to sync those motions with sound effects — for example, a cacophony of robotic chirps, coos, and whoops.

Be that as it may, animating Vector wasn’t a walk in the park — the team created over 2,000 unique reactions for the little robot. Easing the burden somewhat was Anki’s vision system, which leverages a deep neural network to adjust the robots’ gaze, allowing it to look for people and make eye contact.

Hardcoding those sorts of behaviors would’ve been impossible, Palatucci said.

Some of the animations are pretty convincing. When Vector encounters a person it doesn’t recognize, it roves nervously back and forth on its treads, while petting its back causes it to scrunch up its eyes and purr contentedly like a cat. And holding it high above the ground prompts it to wave its tiny forklift frantically, in a panic.

Vector in the home 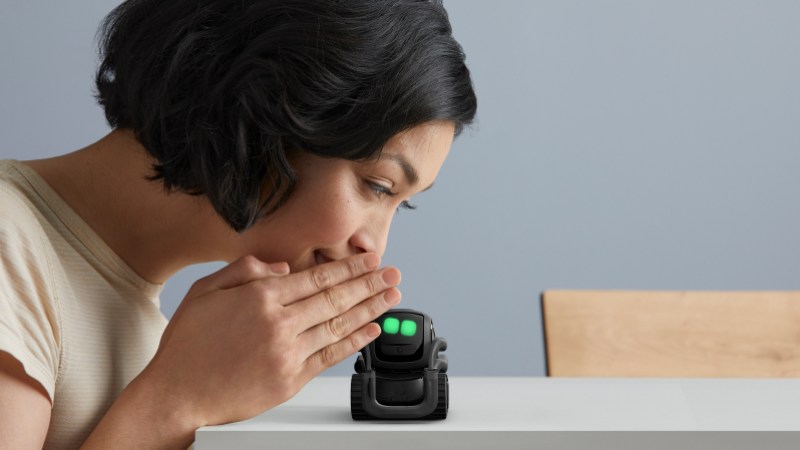 One of the things that differentiates Vector from the dozens of crash-and-burn home robots projects that have come before it, Palatucci said, is its price point. When Vector hits retail brick and mortar on October 12, a single bot, an interactive light-up cube, and a charging pad will start at $249 — hundreds of dollars less than bots like Kuri and Jibo, which cost more than $500. (Vector Space, a mat-like accessory that gives Vector “a perch to observe any room,” will go on sale in October for $29.)

That still might be a tough pill to swallow for folks expecting a futuristic smart bulb-switching, door-unlocking home robot, but Palatucci said that, at least initially, Anki is laser-focused on a market of “tech enthusiasts” and “tech-immersive families.”

This week marks the launch of Anki’s Vector Insiders Club, an exclusive group of crowdfunders that’ll be among the first to get Vector (starting October 9) and have an opportunity to “help shape [its] development.” Backers who pledge within the first 30 days of the Kickstarter campaign (ending on September 6) will get Vector at a discounted price ($199 for one unit and $399 for two units) and access to its Python-based software development kit (SDK) before it becomes publicly available.

“There are early adopters and then there are the ‘early-early adopters’ of Kickstarter. This platform is the best way for us to directly engage with this bleeding-edge tech audience, for whom Vector was specially designed,” Tappeiner said. “We want Vector to arrive first in the homes of people who want to help us determine his future,” he added. “That includes everything from influencing his next set of features to accessing Vector’s software development kit and tinkering with his impressive tech array.”

Vector’s debut doesn’t signal the end of Cozmo — Palatucci was quick to point out that it was the top-selling toy on Amazon last year. Rather, the two products will coexist and continue to see improvements, updates, and new features more or less simultaneously. He added that since Cozmo’s launch in 2013, it’s gotten 23 free updates — including a significant upgrade that introduced Code Lab, a visual programming mode based on Google and MIT’s Scratch — and fostered a community of more than 15,000 developers.

“Cozmo is really about entertainment and education,” he said. “With vector, we’re really trying to do something with everyone in the family.”

Anki has grown a lot since Cozmo’s launch two years ago. Its employee headcount stands at 203, and it recently closed a $200 million funding round with participation from JP Morgan, Andreessen Horowitz, Two Sigma, and Index Ventures. The company has also sold 1.5 million robots globally and hit revenue of just below $100 million last year.

But it has its work cut out for it. Amazon’s secretive Lab126, the division behind Alexa, is reportedly developing a home robot with advance voice-recognition capabilities. Sony’s robot dog Aibo has a camera that identifies friendly faces and responds in kind, much like Vector. And Aeolus, a life-sized home robot that made its debut at CES 2018, boasts articulated limbs and object-detecting cameras, allowing it to pull off tricks like mopping a floor and grabbing a soda can from a fridge.

But none of that worries Palatucci.

“This is the culmination of a lot of prototypes going back many years,” he said. “It is informed by a lot of the learnings we’ve had as a company, and it’s a huge step for us.”