The game is a fast-paced shooter where you have to exterminate demons in Heaven. But instead of shooting guns, you deploy cards in real time to solve the problem of the moment.

You’re an assassin plucked from Hell to compete with other demon slayers for a shot at redemption. You collect Soul Cards to attack your foes or discard them to use movement abilities.

If you come cards in a clever way, you can discover big shortcuts.

The game is coming from Esposito’s Angel Matrix. It’s for the PC and Nintendo Switch. Annapurna didn’t announce a launch date.

“This was supposed to be me just going wild and making something really fun and weird in a very short amount of time,” Esposito said in an interview with GamesBeat. “I was producing it on my own when I was fully intending on self publishing it.” 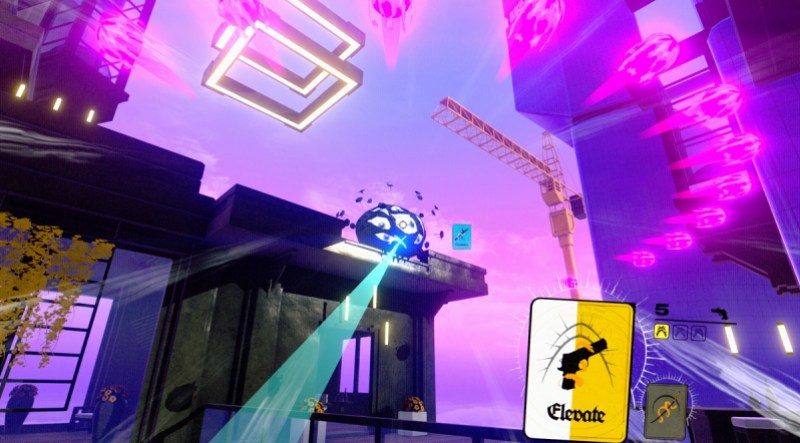 Above: Neon White requires you to play cards at the right time to deal with enemies.

Then Annapurna, which published the zany Donut County game in 2018, asked to check it out. Esposito didn’t think it was in their wheelhouse, but the publisher told them it was stretching beyond its usual games.

“It’s pretty different than a lot of their other games,” Esposito said.

As for the cards, he said, “In this game, cards are more of a metaphor for like the affordances you have with your weapon. So the way it works is that you can hold two different cards at a time. And when you’re holding a card, you can shoot it like a gun in a normal first-person shooter. You can also discard it at any time. And if you discard it, it converts itself into the movement ability.”

You can stack up cards on top of each other. Esposito’s inspiration came from deck-building games such as Dream Club, which he played while making Donut County.

But the inspiration led to a lot of hard work, as it took Esposito a couple of years of work to get a good prototype. Then he got the idea of how the cards came from the enemies that you kill.

The skill isn’t quite as much in being a good shooter player as it is in knowing what cards to play at the right time.

“Most of the strategy is thinking about how do I use these  current resources to both kill all the enemies and get to the end as fast and efficiently as possible,” Esposito said.

There’s a map of central Heaven where you can choose missions to pursue.

As for Donut County fans, there may be some references to it, but it’s a very different kind of game.