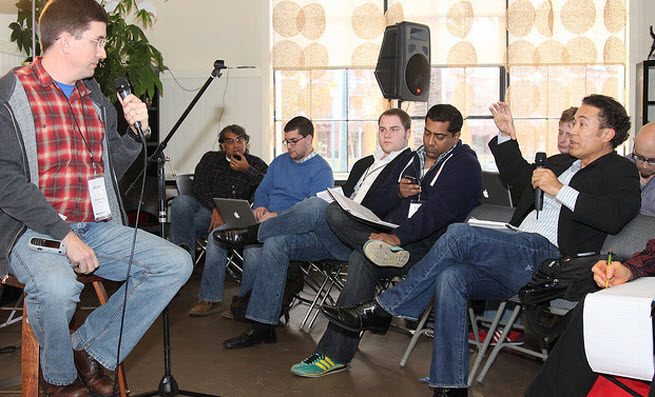 Zynga’s management exodus continued today as two vice presidents resigned in the wake of other departures over the last few weeks.

The company has more than 3,000 employees, but the pressure on employees to leave is obvious, as the company’s stock price is at about 20 percent of its peak earlier this year. Zynga recently authorized 43 million new shares for employees as a measure to help retain them for a longer period. Chief executive Mark Pincus has taken more control of product development and has consolidated power in fewer executives.

Mooney worked on the Zynga Game Network. He was hired from LucasArts in 2008 and was previously general manager of the company’s FarmVille game. Pictured above left, he spoke at our first DiscoveryBeat conference. Birtwistle, a former manager at Amazon, started at Zynga last year.

Zynga spokeswoman Dani Dudeck said, “Zynga’s voluntary attrition rate was around 1 percent for the first four years, and our current attrition levels are not only below what we expected and modeled in our post-IPO planning, they also continue to stay well below the industry average. Developing great leaders is an essential part of Zynga’s core values — we’re proud of our record in that regard — and it’s not at all surprising that some would move on and or retire post-IPO. Zynga continues to lead the industry with the top talent in social game development. We’re proud of the teams working hard to create the next generation of social games including the recent launches of The Ville, ChefVille and the coming launch of FarmVille 2.”