Everyone you know is dead. Cities have been overrun by strange creatures. And the only things you have on you are a flashlight, a can of beans, and a handgun. Suddenly, a human, a fellow survivor, crosses your path. He says he’s friendly and asks if you can spare some food.

What do you do? Help him? Or shoot him in the head, loot his body, and move on?

It’s hard to imagine how we’d react to something like this in real life. But thanks to the explosive rise of multiplayer survival games, more and more people are exploring these moral quandaries for themselves. The face of this new and punishing genre is DayZ, Bohemia Interactive’s open-world zombie survival simulator for PC. When they’re not busy running from the undead, players have to make these crucial decisions every time they meet someone. Though DayZ originally began life as a mod for military shooter Arma II, it grew so popular that the dev team decided to turn it into a standalone product.

Even though this version of DayZ isn’t finished yet, it has been at or near the top of Steam’s best-seller list since debuting in December 2013. As of this writing, Bohemia has sold an astonishing 2 million copies.

DayZ’s impressive success story inspired more independent developers to create their own version of an online apocalypse, such as Rust (which hit 1 million sales in February 2014) and Nether. The genre has also attracted the attention of Sony Online Entertainment, the studio responsible for the massively multiplayer online games Planetside 2 and Everquest. Last month, it announced H1Z1, a survival game that also has players fighting against zombies. Like DayZ, all these games are or will be going on sale in an unfinished state, giving players a chance to not only play them early but to help shape the games themselves.

But how did they get so popular in the first place, convincing millions of people to spend $20 to $30 on what can look like broken games? To get some answers, I spoke with a few of the developers in this space as well as with people from academia who could talk about the effects of post-apocalyptic entertainment on game design and other forms of media.

Together, we looked at four key areas: why the end of the world is a common setting, what role zombies and other creatures play, the power of player-driven stories, and the future of the genre. 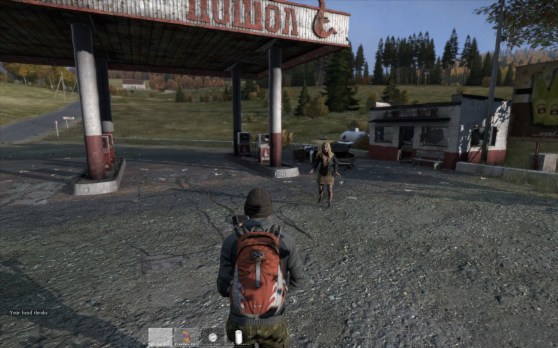 Above: DayZ takes place in the fictional Soviet country of Chernarus.

Yearning for the apocalypse

Our appetite for apocalyptic stories clearly goes beyond video games: You can find countless books, films, and TV shows that depict humanity’s struggles at the end of the world. To examine why this is such fertile ground for developers, we have to look outside video games and see how it has taken over pop culture itself.

“Usually, every type of mass entertainment — throughout history, when you’re looking at it very closely, of why something has become so popular, you see it reflecting the concerns of the time,” said Dr. Barna Donovan, an associate professor of communication and media studies at Saint Peter’s University in New Jersey.

Donovan studies the relationships between films and their audiences. While he doesn’t play games, he noticed that much of his findings overlap with gamers as well.

“And many people are fearing we are living in times when the complete downfall of society, whether from social unrest, disease, war, terrorism, rogue nations … these are not fantasy scenarios,” he added. “These are things that can happen to us. And usually, people turn to entertainment to manage it, to put the fears of the time at a safe distance.”

Of course, when you’re reading or watching these kind of stories, it’s a passive experience — you’re following the arc of a predetermined tale. When you’re actually playing inside of a digital apocalypse, exerting as much control as the developers give you, you become a part of a story where anything can happen.

Above: Rust places an emphasis on making your own tools and weapons.

“There are a lot of possibilities that come with suspending the normal rules of civil society — even in play,” said Dr. Soraya Murray, an assistant professor of film and digital media at the University of California at Santa Cruz. “In a post-apocalyptic scenario, you can start to explore larger themes like humans versus nature, humans versus humans, and humans versus society. There’s a great essay written by Evan Watts, who talks about how so many games are set in some kind of ruins — which are both a sign of destruction that has occurred but also a sign of the potential for something new, too. It’s a useful way to think about spaces you might see in a game like BioShock or The Last of Us. The locations become places where there’s fluctuation between civility and brutality.”

The Last of Us is part of the latest crop of single-player games that are also benefitting from the craze. The PlayStation 3 exclusive depicts a world ravaged by a fungal virus, turning its victims into horrendously mutated creatures. Tense gameplay and a refreshingly mature storyline helped it win many awards, including GamesBeat’s Game of the Year for 2013.

In March, developer Naughty Dog announced that it had sold 6 million copies of the game.

“While playing The Last of Us, I couldn’t also help but think about how the scenario is a little bit of wish-fulfillment, presented to players in the form of a horror survivalist game,” said Murray. “Sure, it’s a terrible scenario with a bleak outlook. But it is also an opportunity to explore a simulated scenario of a dire situation. The veneer of society and civility gets torn away: What really matters then? For someone who has the luxury not to actually exist in a lived reality of basic survival, these types of games might be welcome spaces to entertain a little bit of fantasy about rejecting all the impositions, pressures, and obligations that accompany modern society.”

Without any scripted storylines, characters, or quests to follow, DayZ, Rust, Nether, and the upcoming H1Z1 give players the freedom to role-play as themselves. Online servers become microcosms of fragmented societies — small clusters of people who may or may not help you live. But beyond the basic mantra of “just survive,” players still need a little encouragement.

One way to do that is to introduce a common enemy.

Above: A look at Sony Online Entertainment’s H1Z1.