The horror, the horror.

Francis Ford Coppola’s film studio American Zoetrope and his game developers have canceled the Kickstarter crowdfunding campaign for the Apocalypse Now PC game and have shifted their fundraising efforts to the ApocalypseNow.com website.

In doing so, the developers pre-emptively ended a campaign that wasn’t going to hit its target, as 2,730 backers had pledged only $173,097 of a goal of $900,000. For Kickstarter, campaigns are all or nothing. If you don’t hit your target, you can’t collect any of the pledged money.

But Montgomery Markland, the game designer of the planned horror and role-playing game based on the original movie, told GamesBeat that the company believes that the website campaign can be much more successful as it will show a rich set of materials that will highlight the 38-year-old movie in all its glory. That campaign will target $5 million in funding and run indefinitely.

Above: Apocalypse Now will capture the horror of Francis Ford Coppola’s original vision.

Markland acknowledged that while film buffs were excited about the game, younger gamers probably had no clue about the movie and its potential. The new website will try to serve as a rallying point for the community and long-term commitment to funding the project and sharing details of the development of the game.

He wants ApocalypseNow.com to be an engaging space where fans and backers can get the latest updates, communicate with the team making the game, and continue to support the project through the entirety of the game’s development cycle. The team will rely on this dialogue to help them to create an Apocalypse Now game worthy of the motion picture in every way.

Above: Apocalypse Now the game will have 15 to 25 hours of gameplay.

The site will also be a virtual playground for fans, built around the narrative of the original motion picture. The Apocalypse Now community will see real-time updates on the game through posts, livestreams, and group events. Backers will directly communicate with the team through the premium site, creating a systematic and regular flow of conversation, updates, and news.

“We’ve been building the website since 2015, and it has always been the main event,” Markland said. “We never felt like we could create an appropriate Apocalypse Now experience purely on Kickstarter. We are getting to the second step here.”

While he said the gross pledges were “not fantastic” on Kickstarter, he was encouraged that the individual numbers were good, with average pledges running $63 to $70. That’s a high number as people only had to pledge $35 to get the game. 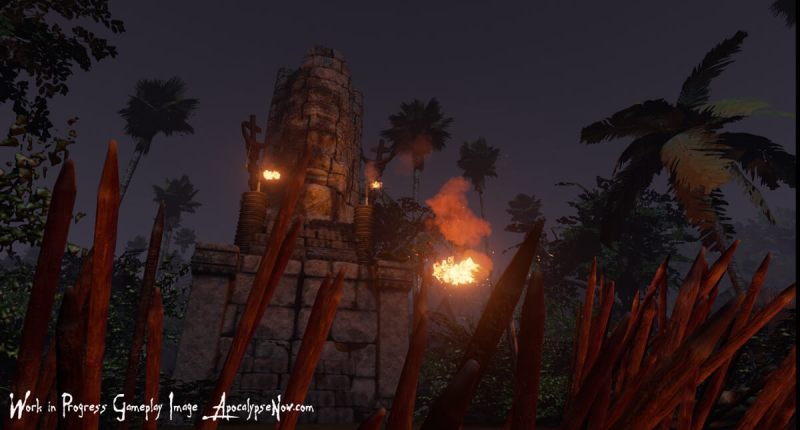 Above: Scenery from up the river in Apocalypse Now.

“It suggests to me that people are highly interested in the idea,” he said. “Usually, movie games are garbage. We wouldn’t even consider doing this as a movie tie-in. I think that the idea of making an interactive version of Apocalypse Now doesn’t fully connect and communicate with fans in 30 days,” which is the length of the Kickstarter campaign.

“It is something that needs to live over the course of a year,” he said.

“Everybody struggles over what their mission in life is,” he said.

He said he’s watched the film more than 50 times, first when he was in high school, and now it means so much more to him.

“Everybody knows Apocalypse Now is based on Heart of Darkness, as a loose adaptation set in the Vietnam War. But it was inspired by narratives over thousands of years, all the way back to Homer’s Odyssey. And before the Odyssey, it was a story told around a campfire. To me, we have come full circle and we have digital campfires now, and we get to tell our version of the same story, our way.”

He said the game will have the option for veering off the path and alternate endings.

“Most games are about pushing the button and pulling the trigger,” he said. “That is not what this is about. Willard, in the movie, fires his weapon twice. This is a role-playing game with the horror component, and it is about the human condition.” 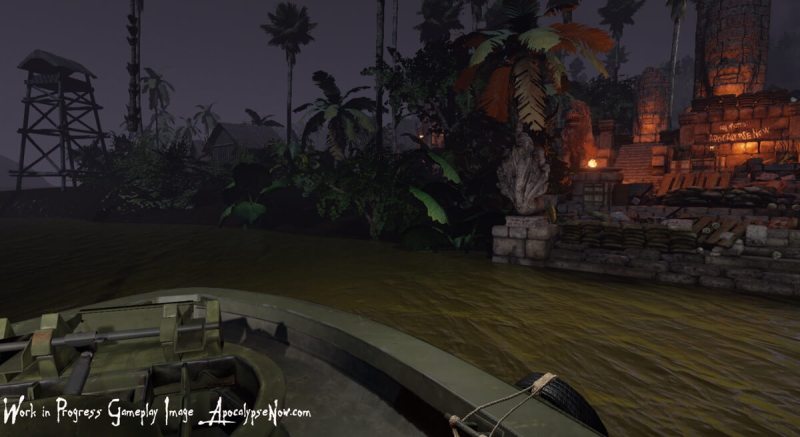 Above: Don’t get out of the boat in Apocalypse Now — The Game.

Under the new website campaign, fans can donate as little as $25.

“There is a lack of awareness in the gamer community about the movie, and the site is the best way to increase the awareness,” Markland said. “We are going to entertain people and engage them continuously for years on this site.”

The goal is to make a game that takes perhaps 15 to 25 hours to play, compared to watching the movie in a little under three hours. Apocalypse Now will launch on PC on Steam Early Access in the fourth quarter of 2019, and it could debut in full in 2020.

As for fan feedback, Markland said, “One of the greatest things about financing games this way is that the people are smarter than the executives. I like the people to be in charge, rather than someone in a suit.”