That number of downloads for hypercasual games — simple games that can be played in a minute or less — was the highest ever and it suggests that hypercasual games aren’t necessarily a fad that are going to die out soon, said Lexi Sydow, head of insights at App Annie, in an interview with GamesBeat.

App Annie also said that mobile games are on track to surpass $120 billion in spending in 2021, growing 20% over $100 billion in 2020, according to an analysis of the first nine months of the year.

“We’re still on track to see over $120 billion in consumer spend on mobile games,” Sydow said. “That figure includes iOS and Google Play, as well as third-party Android stores in China. We’ve had a really strong year for mobile gaming in particular.”

“We haven’t seen a huge indication of IDFA impacting from our data at the end of the day,” Sydow said. “People are still using and playing these games at a really high rate. And especially for the App Store consumer spend.” 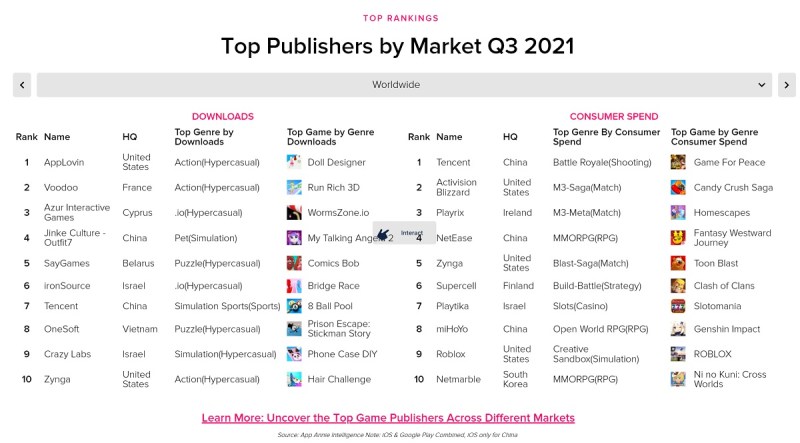 Sydow said that Apple’s change to the Identifier for Advertisers (IDFA) has prompted a lot of concern about how it could hurt mobile game revenues. The monetization platform Fyber reports only about 15% of users are opting-in to share their user data with advertisers, and that makes targeting harder and user acquisition less effective.

But Sydow said that IDFA does not yet appear to be so stifling for revenues that it is hurting the entire market. This is a contrast to the views of Brian Bowman, the CEO of Consumer Acquisition, who believes that third-quarter results for mobile game companies in the public realm showed considerably more impact than they were talking about earlier. Bowman estimated the industry is seeing iOS revenue loss of 15% to 35% across mobile app advertisers. Ad rates are up, ad impressions are up, and impression quality is likely down due to less effective audience targeting and measurement.

By contrast, Sydow said the IDFA change isn’t a global phenomenon, as it hasn’t affected the Android market at all, and only certain game categories are suffering from the lack of targeting. Those hit hardest by it are social casino games and strategy games.

The mobile gaming downloads peaked in the second quarter of 2020, driven by the pandemic surge when people turned to mobile-social games when they couldn’t get together in person. But Sydow said that consumer usage and spending remain very high throughout 2021.

China has also put a damper on mobile game approvals, as regulators have slowed down their approvals of new games. And it has also restricted youths to three hours of gaming per week, and companies are now just beginning to enforce that. Sydow expects that impact to show up in future results.

“The China part is also a testament to the global market outside of China, as the global market has grown significantly,” Sydow said. “We’re seeing indications of the gaming regulations taking effect, which soften a bit of the growth that we had seen previously from mobile gaming in China, but ultimately we are seeing such strong adoption outside of China that it is over-compensating.”

On top of consumer spending, a surge in mobile advertising revenue is also helping the game industry.

“I feel that COVID brought mobile games to the mainstream and accelerated it,” she said. “There is a real push that happened. This year, we’re just we’re still seeing the effects of people playing more games. There could be an indication that people are dipping their toe in it first with maybe some hypercasual games, puzzle, or match-3 games. And then it becomes playing more games or trying out new ones.” 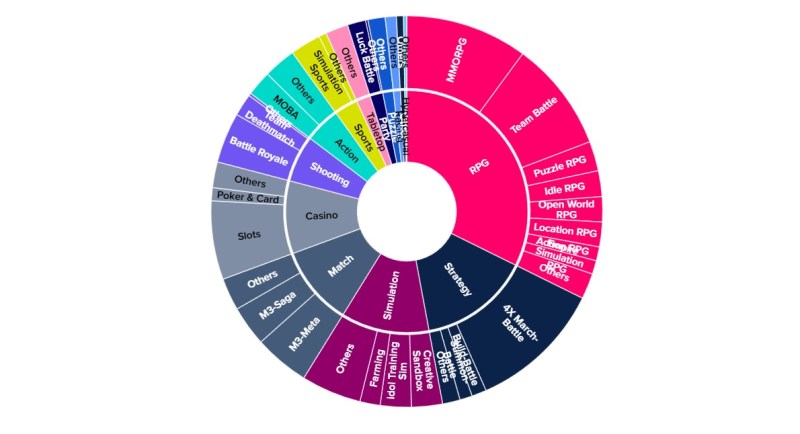 In the report, App Annie said that Runner Action games, like Sybo’s Subway Surfers, were the No. 1 downloaded sub-genre among the action games genre. It also said that 4X March-Battle Strategy games are the No. 1 gaming sub-genre (at 10%) by consumer spending, with $2.4 billion being spent globally.

Sydow said the key to creating an insanely successful mobile game is to focus on monetization, engagement and player retention. 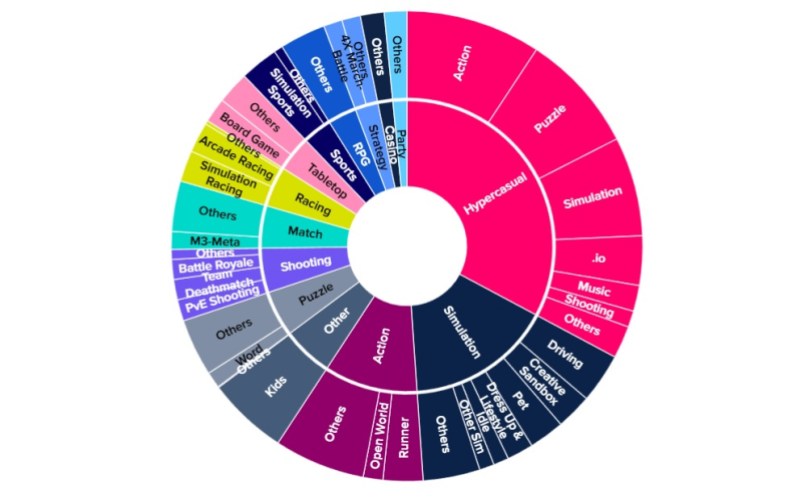 Hypercasual (led by action, puzzle, and simulation genres) were responsible for around 33% of game downloads in Q3 2021, reaching 3.6 billion downloads, nearly twice compared to the same period two years prior. Count Masters was the most downloaded hypercasual game during the quarter.

“Hypercasual tends to dominate the downloads charts, quarter after quarter,” Sydow said. “We saw some non-hypercasual games really standing out like PUBG Mobile and Roblox, as well as My Talking Angela (a new pet simulation). That’s kind of compelling. Perhaps people might start with hypercasual, dip their toes in it, and then” they start playing more.

The Runner Action genre remained one of the most popular games by downloads, represented by all-time favorite Subway Surfers. In the United Kingdom and United states, users who play games from this genre have the highest percentage of shared users with action hypercasual genre.

4X March-Battle Strategy genre has the largest single market share in terms of consumer spend, in excess of $2.4 billion globally in Q3 2021, or 10% of market share. Rise of Kingdoms took the top position by consumer spend globally, while Evony led in downloads and active users. Riot Games’ Wild Rift hit more than $150 million in consumer spending in this category.

The Slots genre was a key driver of consumer spend among casino games, representing $1.4 billion or 6.1% of total spend in mobile games in Q3 2021. Slotomania is the leading game in this genre, topping both downloads and consumer spend rankings.

Game companies have to get more clever about seeing the links between games to succeed with user acquisition. For instance, in France, South Korea, the United Kingdom, and the U.S., puzzle games have the highest percentage of shared users who also play match-3 games. 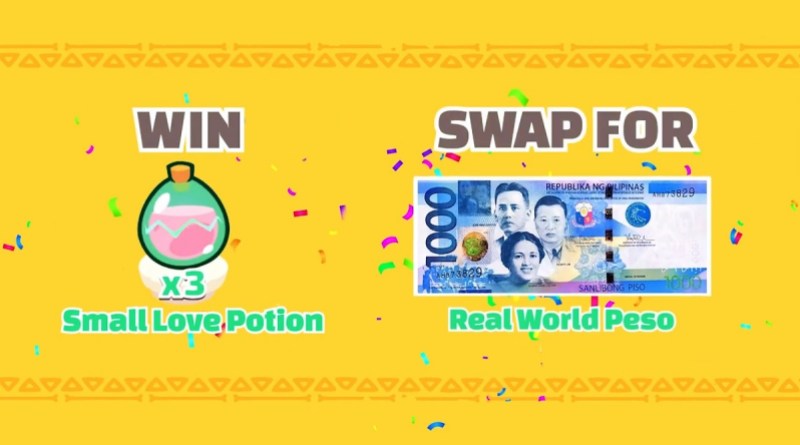 Of the hot genres, App Annie doesn’t yet track the games that aren’t on iOS and Android. In the past couple of quarters, one of the fast-growing games on the web was Axie Infinity, which developer Sky Mavis said has more than two million daily active players, and Axie characters have generated more than $2 billion in sales and resales. Axie Infinity uses nonfungible tokens (NFTs) to uniquely authenticate digital items on the blockchain. It has enabled a “play-to-earn” model where players can reap financial rewards in games. While App Annie is paying attention to that genre, it isn’t yet measuring it.

“At this stage on mobile, it’s a little bit nascent, as we haven’t seen anything huge emerge on mobile quite yet,” Sydow said. “There’s a bit more traction happening on the web and PC. I think that’s something that’s we’re going to watch closely in 2022. I feel that heading into next year, and maybe the year after, we just haven’t seen a major player emerge on mobile in a huge way yet for NFTs. But it’s definitely something we’re keeping our eyes on for sure.”

Sydow believes that the app stores will continue to be the main distribution method for mobile games.