Mobile games are on track to surpass $120 billion in spending in 2021, growing 20% over $100 billion in 2020, according to an analysis of first-half results by mobile data and analytics provider App Annie.

App Annie 2021 Mobile Gaming Tear Down: Key Trends on Subgenres, Monetization, & User Acquisition report can give the mobile game industry some peace of mind that growth continues to be on track despite the difficult comparisons to 2020’s pandemic-driven growth and Apple’s shift to prioritize user privacy over targeted advertising with iOS 14.5.

In some ways, it’s surprising that the privacy impact — which started in April — isn’t as big as expected yet, so we spent some time talking about that.

Sam Yang, the senior vice president of global field operations at App Annie, said in an interview with GamesBeat that Apple’s change to the Identifier for Advertisers (IDFA) has prompted a lot of concern about how it could hurt mobile game revenues. The monetization platform Fyber reports only about 15% of users are opting-in to share their user data with advertisers, and that makes targeting harder and user acquisition less effective.

But Yang said that IDFA does not yet appear to be so stifling for revenues that it is hurting the entire market. Zynga reported in its earnings last week that IDFA was having a big effect in its “choppy” business performance, and it warned its second-half bookings could be down by $100 million as a result. Brian Bowman, the CEO of Consumer Acquisition, has also said that IDFA has hurt iOS revenues by 15% to 20% or more. 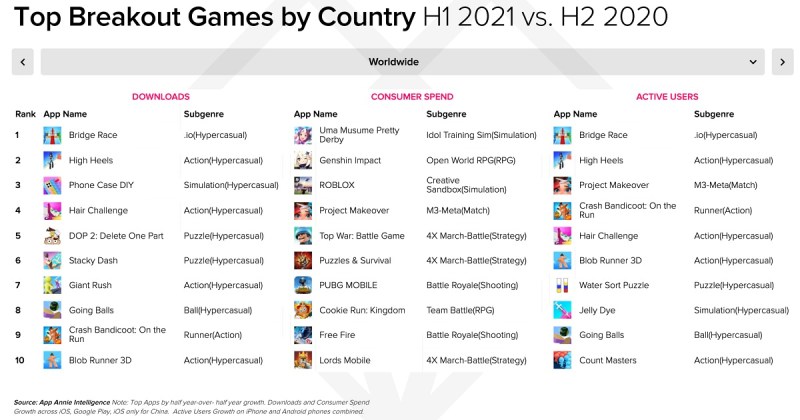 Above: App Annie tracked the top games by country in the first half in 2021.

Yang noted that the IDFA change isn’t a global phenomenon, as it hasn’t affected the Android market at all, and only certain game categories are suffering from the lack of targeting. Those hit hardest by it are social casino games and strategy games.

“When you acquire users on a mass level as quickly as possible, you churn through them, and then you find the cohort of users [that spend money] and you can retarget them, then that is going to be a lot more challenging,” Yang said. “It’s not a uniform [impact] across all all genres, but it is more specific to more certain certain genres. That’s what I’m hearing directly from game publishers.”

Yang noted that App Annie isn’t disputing what Zynga is seeing, but he said App Annie has its eye on the global market and right now its prediction of 20% growth in 2021 is still holding strong.

Lexi Sydow, the head of marketing insights at App Annie, said in an interview that hypercasual subgenres led downloads, accounting for four of the top 10 most downloaded subgenres (across all games). The puzzle and action subgenres grew 16% and 37% from the first half of 2020, respectively. Competition is intensifying in hypercasual, with Happy Glass hitting 100 million downloads in 62 days — a new record.

“We haven’t really seen anything that would be super indicative of IDFA impact yet [in the first half],” said Sydow. “In fact, we’re still seeing a lot of publishers leveraging hybrid monetization models. More publishers than ever are leveraging in-app purchases, monetizing through the app stores, or incorporating advertising on top of that. And it’s more popular in Western markets like the U.S. and the U.K. But we are seeing that that is growing in the top publishers year over year. We haven’t seen anything major in terms of IDFA impact showing up in the data.”

She added that App Annie is monitoring IDFA effects and will keep its eye on it in the second half results. 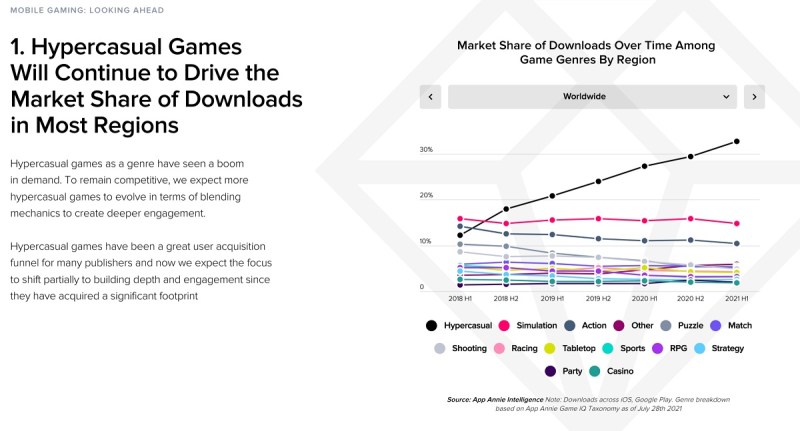 Above: Hypercasual games continue to pull ahead.

App Annie said the spike in demand for mobile games at the beginning of the pandemic is showing no signs of slowing down. Weekly game downloads first surpassed one billion in March 2020 and have remained at that level since. But downloads are flat compared to the rate of downloads a year ago, so the hypergrowth in the market has slowed down in terms of downloads.

But people are playing the games they downloaded in the past year, and they are spending money. App Annie said no slowdown is evident in spending, even as consumers return to other activities as lockdowns lighten up around the world. That is good news, but it sounded very unintuitive to me, since we are now lapping the record second quarter of 2020, when lockdowns and the disappearance of live entertainment prompted historic growth in gaming a year ago as people turned to games for solace and to play with friends remotely. It also seems like the return to real world activities would hurt gaming.

One thing that is clear is that consumers are not returning to their pre-pandemic spending levels. In the first half of 2021, consumers spent $1.7 billion per week in mobile games, a 40% increase versus prepandemic levels. The good sign, Sydow said, is that the level of spending and downloads did not drop back down to pre-pandemic levels.

On top of that, Yang said that consumers are moving their gaming and spending onto mobile. In the home, when they have a choice, more people are choosing to play on mobile devices because they are more accessible and instantly playable, Yang said. By contrast, it’s hard for people to get their hands on high-end PCs or expensive game consoles that are in short supply, and so the allure of mobile games continues. This trend was reinforced as people turned to mobile devices to use other apps that otherwise might have been used on a PC. 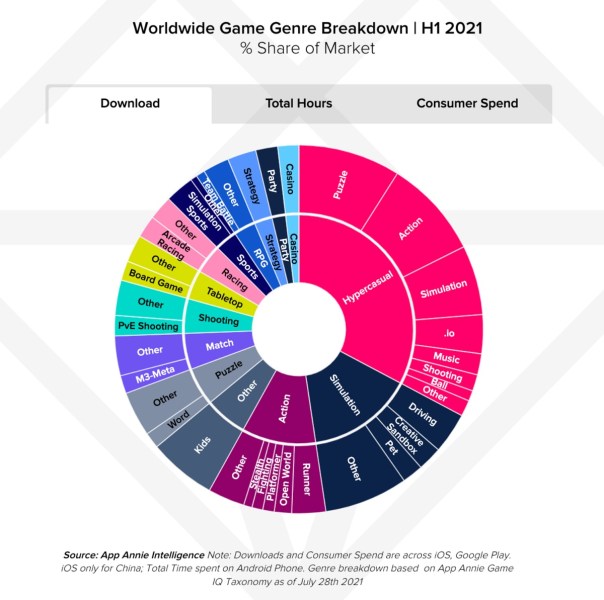 Above: Hypercasual is the pink area.

And when people go back to the outdoors and workplaces, they take their phones with them and still play on mobile devices, Sydow said. Notably, Pokémon Go from Niantic did really good with its outdoor gameplay focus.

“Mobile gaming is growing the fastest, so the tide is rising,” Yang said. “We’re bullish on that. We understand what Zynga is talking about. There are legitimate concerns for certain publishers. From a macro perspective, for mobile gaming in general, there is a tremendous trend. There are more Gen Z folks getting phones earlier, the older generation is getting into mobile gaming. And gaming is losing its stigma.”

In the first half of 2021, 810 games surpassed $1 million in consumer spend each month, a 25% increase versus 2019, App Annie said. Those games are quite accessible.

“You’ve got like a console in your pocket,” Sydow said.

Gender gaps also appeared on a regional basis. Mobile game usage in the United States leans most heavily toward female users (64% of users are female); the only other big regions that have more male than female gamers on mobile are Japan (56% male) and South Korea (53% male). 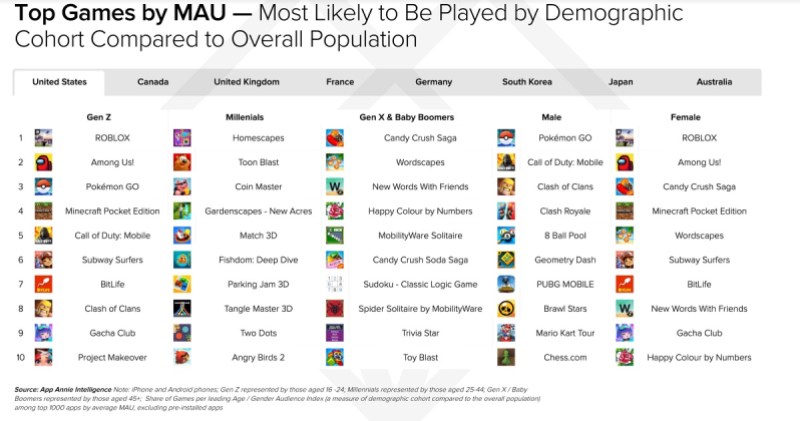 China’s gaming footprint also continues to expand. China is steadily growing its share of the global gaming market, surpassing the United States in size of consumer spend in some markets in the Americas, Europe, the Middle East, and Africa for the first time.

Overall, advertising is strong, and companies are leveraging both in-app purchases and ads as revenue sources, Sydow said. Asked what would happen around uncertainty due to the Delta variant of COVID-19, Yang said that mobile gaming is still likely to prosper. If people stay indoors, they play more mobile games. If they go outside, they also play more mobile games.

“Either way, I think mobile gaming will continue to grow,” Yang said.

Yang also points to gaming’s growth in culture. Netflix has appointed a gaming executive, he said. And gaming is expanding to other areas of entertainment, as evidenced by Ariana Grande’s concert in Fortnite. That is making gaming more resilient in culture.