All of the totals include both digital and physical spending, but they do not include ad revenue. Mobile gaming figures include all app stores: iOS App Store, Google Play, Windows Phone Store, Amazon, Samsung Galaxy and third-party Android stores. The home game console total includes discs, digital games and gaming-related subscription services (Xbox Live and PlayStation Plus).

Games represented nearly 80 percent of total worldwide consumer spending for the combined iOS and Google Play app stores in 2017, but games only accounted for 35 percent of total worldwide downloads. That means that gamers spend a lot more money than non-gamers, said Danielle Levitas, senior vice president of research at App Annie, in an interview.

“The top takeaway is mobile gaming sees to accelerate relative to the aggregate games market,” Levitas said. “The gap continues to grow over the consoles and the PC. It makes sense, as there are now more than 4 billion mobile devices.”

Games made up a larger share of Google Play’s consumer spending compared to iOS, but consumers spent nearly two times more on iOS games than on Google Play games. 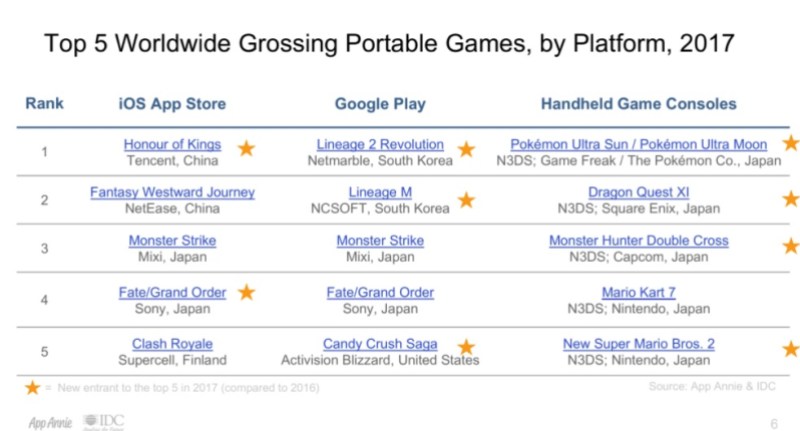 Above: App Annie’s list of the top-grossing games on mobile and handheld.

Asia-Pacific gained in share of game spending on iOS and Google Play last year, mostly due to massive growth in China and Japan on iOS, and in South Korea on Google Play. Japan saw strong sales of handheld game consoles in the region. Part of the reason these areas are outstripping the West is the time spent playing games. In Asia, 22 percent of mobile time is spent with games, compared to 10 percent in the U.S.

“The monetization is also better on games in Asia,” Levitas said.

North America and Western Europe dominated from a home console angle, but the rest of the world grew fastest in terms of total game-related spending based on the growth of developing economies. PC/Mac game spending also ticked up in Asia-Pacific. Asian-made games took four of the top five positions on both iOS and Google Play, in terms of the top-grossing worldwide titles.

In mobile gaming, live player-versus-player expanded its presence in top 5 grossing games on both iOS and Google Play, with titles such as Honor of Kings and Lineage 2: Revolution taking the top spots.

Levitas said that the growing popularity of battle royale games on mobile, like PUBG: Exhilarating Battlefield and PUBG: Army Attack, should drive further growth and live multiplayer engagement in 2018.

In a sign of the changing times, future Pokémon titles won’t be delivered on Nintendo 3DS/2DS: the extremely popular RPG, which has been a core 3DS/2DS franchise, will target Nintendo Switch and mobile devices in future releases.