App Annie has released a report showing the top games and apps for mobile during Q1 2021.

The report includes data for nine countries, including the U.S. and China, looking at top games based off of downloads, consumer spend, and monthly active users. 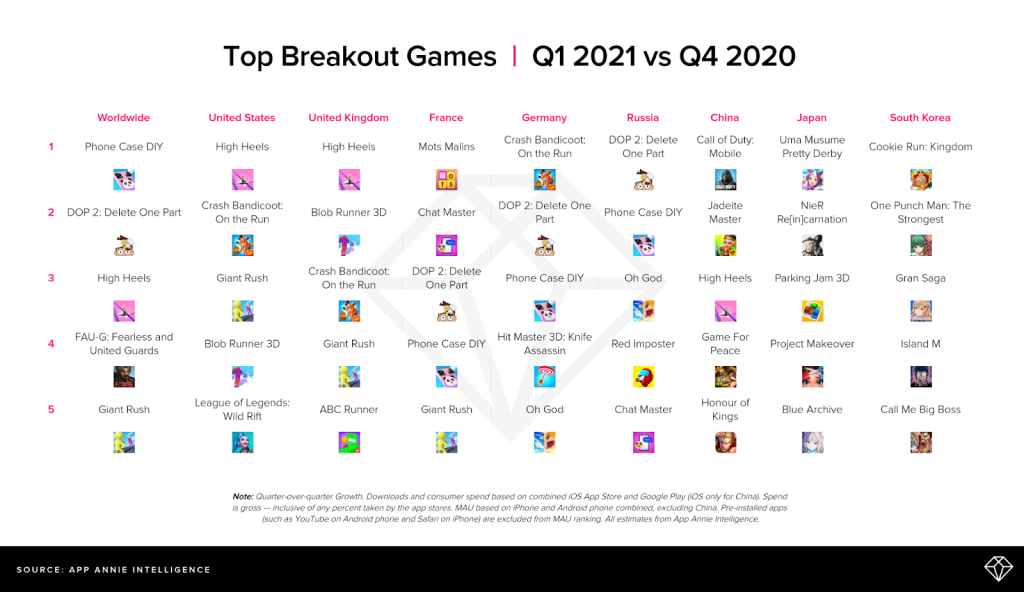 In the U.S., Project Makeover had the most downloads. Roblox had the strongest consumer spend, while Among Us enjoyed the most monthly active users. The new Crash Bandicoot: On The Run also enjoyed a strong start, landing at No. 2 on the downloads chart.

“Although mobile gaming has yielded a huge range of original IP, it still presents a sizable opportunity for ‘classic’ franchises,” App Annie head of marketing insights Lexi Sydow told GamesBeat. “Gaming publisher King — behind the popular Candy Crush franchise — only launched Crash Bandicoot: On The Run on March 25, but the game still generated 21 million downloads in just four days, reaching 9.1 million launch day downloads in the top eight markets including the U.S., Brazil, Mexico, Italy, Russia, France, Germany, and Spain, including 2.6 million in the U.S. alone. Its solitary week of availability was enough to propel it to the top of the breakout games chart — ranking No. 2 in the United States, No. 1 in Germany, No. 3 in the UK, and No. 9 in France. Crash Bandicoot’s brand recognition and the popularity of the casual gaming category helps position the app for future success, building off a successful launch campaign driven by a soft launch rollout and pre-registration campaign to drum up demand.”

On The Run is part of Activision Blizzard’s efforts to bring more of its top franchises to mobile following the success of Call of Duty Mobile. It’s also working on Diablo: Immortal, which will bring the popular action RPG series to mobile.