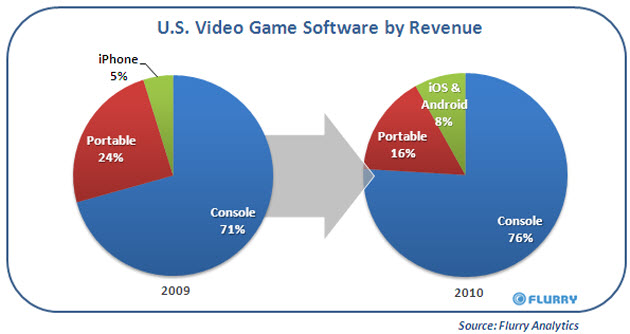 That’s a big change in just a few years, and one that is bound to have an impact on video game console makers such as Nintendo, Sony and Microsoft. And for the first time, sales of smartphone and tablet games have grown to $800 million, exceeding the estimated $700 million in revenue from PC games sold at retail.

A year ago, Flurry said that the iPhone and iPod Touch grabbed about 5 percent of the U.S. video game market from 2008 to 2009. Now, the rapid expansion of both the iOS (iPad, iPhone, iPod Touch) and Google Android devices has changed the market even more.

“The magnitude of disruption is increasing, in particular within the portable gaming category,” said Peter Farago, vice president of marketing at Flurry, a major analytics and recommendation service for mobile apps. The analysis is based on publicly available data such as NPD market research numbers in the U.S. and Flurry’s own data based on 12 billion aggregated user sessions per month across 80,000 mobile apps, including iOS, Android and tablet devices. On the video game side of the equation, Flurry does not include revenue from online games and PC games sold at retail.

Overall, the total U.S. game revenue from the consoles and portables was flat last year, growing to $10.7 billion from $10.4 billion in 2009. But while console gaming’s share of that total grew slightly from $7.4 billion to $7.8 billion in 2010, portable gaming software sales fell. Overall portable game market share dropped from 24 percent in 2009 to 16 percent in 2010. That’s most likely due to the big gains by Apple and Android. 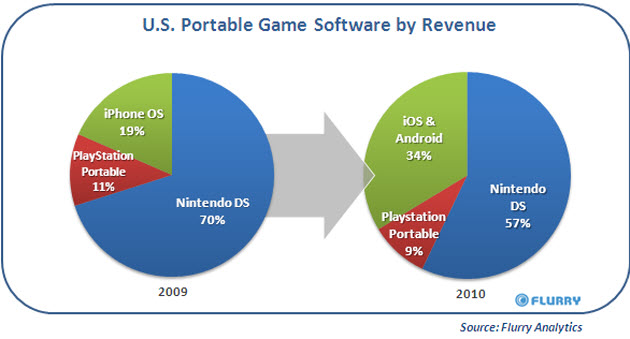 Nintendo chief executive Satoru Iwata recognized the threat in his keynote speech at the Game Developers Conference, saying that mobile platforms “have no motivation to maintain the value of gaming,” meaning the prices for mobile games are low, forcing developers to sacrifice quality. It remains to be seen if the launch of the 3DS handheld from Nintendo this month will help Nintendo retain share. But Nintendo’s own count shows that the Nintendo DS had a better sales start than the 3DS.

In 2010, Apple and Android grew to 34 percent of the portable game market, compared to 19 percent in 2009. During that time, the Nintendo DS’s market share shrank from 70 percent to 57 percent, while the Sony PlayStation Portable’s  shrank from 11 percent to 9 percent. Smartphone and tablet sales spiked 60 percent during 2010. The net effect is that portable gaming, without mobile game sales, shrank from $2.7 billion in 2009 to $2.4 billion in 2010.

Wedbush Morgan Securities video game analyst Michael Pachter said that the “onslaught of $1 games is going to continue” and that “[Nintendo and Sony] are going to have to share the market with Apple and Android.” Flurry concluded, “Mario may indeed be standing on a burning platform,” a reference to a warning Nokia’s new CEO, Stephen Elop, gave to his employees to explain his decision to hastily abandon Nokia’s own Symbian mobile platform and jump to Microsoft’s Windows Phone 7 instead.