Mobile is still growing, and gaming — as with nearly every emerging consumer technology — should get most of the credit.

People downloaded 17.2 billion apps from the iOS and Android app markets in the first quarter of 2016, according to a new report from intelligence firm Sensor Tower. That’s up 8.2 percent over the same period in 2015. As usual, the gaming category made up the most significant chunk of that total with 1.95 billion game installs from the Apple App Store and 4.7 billion from Android’s Google Play. Gaming is 284 percent and 404 percent larger than the next closest categories on iOS and Android, respectively. This data reveals why it isn’t surprising that the global gaming industry is worth $34.8 billion annually and growing.

While iOS trails Android in terms of volume of downloads, its gaming category is growing much faster. The App Store saw a 14 percent year-over-year increase for its gaming category while the same sector on Google Play jumped less than a percent. That makes some sense considering games on Google’s mobile operating system are so far ahead of everything else. 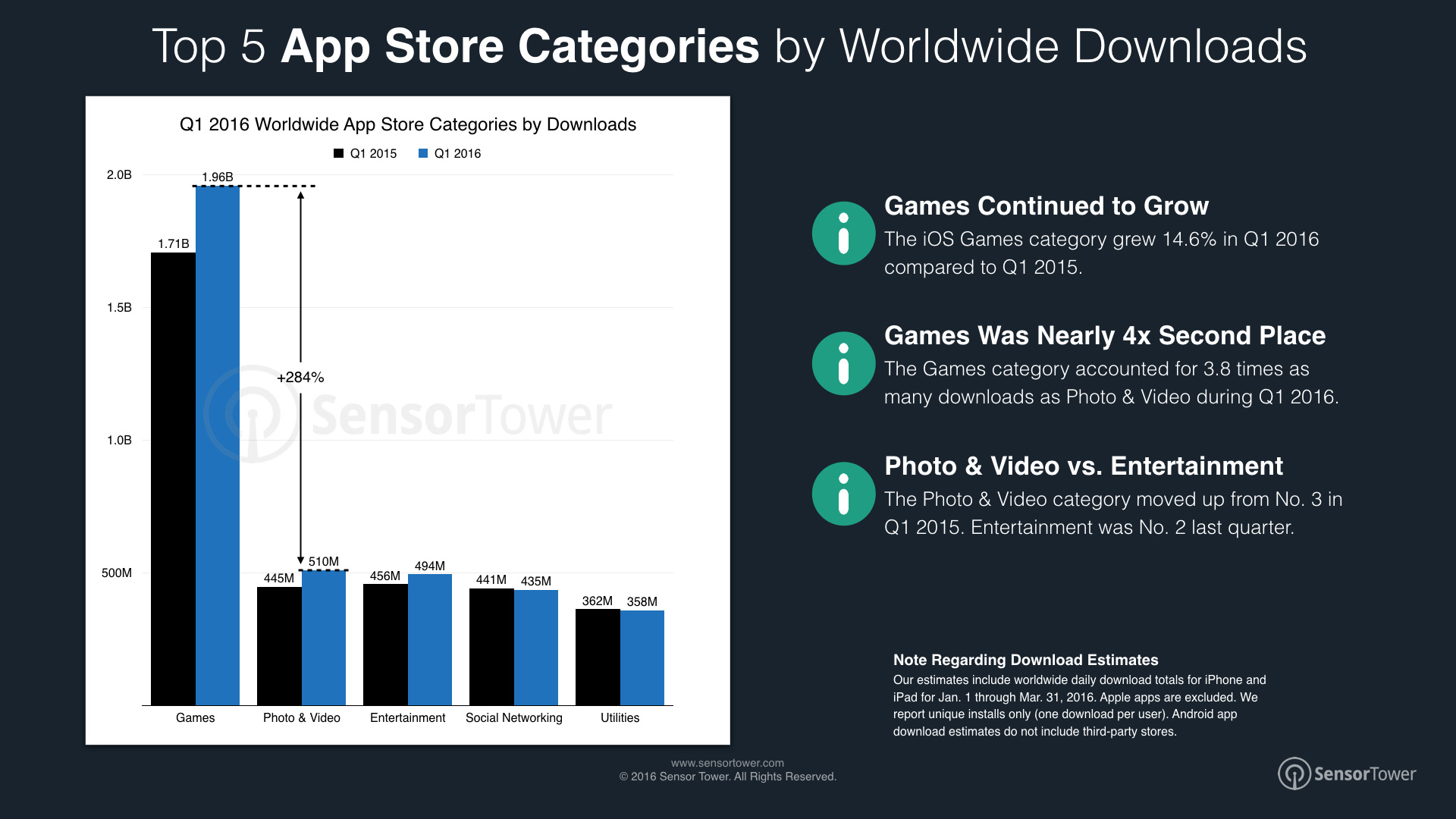 Above: iOS gaming is bringing in more downloads than ever, and it’s growing at a rate that’s outpacing the rest of the App Store.

Of course, it’s the same handful of companies taking advantage of the massive mobile audience. Madden NFL Mobile publisher Electronic Arts, Candy Crush company King, and Kim Kardashian developer Glu Mobile do well on iOS, Android, or both in terms of downloads. And that makes for a familiar download list — although publisher Supercell’s new strategy battler Clash Royale debuted high on the charts despite having only one month on the market. This is one of the big reasons it made $110 million last month.

The top downloaded games worldwide in the first quarter of 2016, according to Sensor Tower:

This continued growth is a positive sign for developers and publishers who have turned gaming on smart devices into a lucrative business. Clash Royale is on pace to generate $1 billion this year, but it isn’t alone. You can expect Supercell’s Clash of Clans to likely do the same. The suite of Candy Crush releases from King should likely surpass that massive milestone as well.

For gaming as a whole, a strong mobile sector proves that consumers still want to spend their money on interactive entertainment. This should convince companies like Sony, Microsoft, Facebook, and more to keep investing in the space whether that’s with traditional consoles, cutting-edge virtual reality systems, or mobile apps.