Hardcore game developers just got some fantastic news — Apple’s speedy Metal graphics technology for iOS is now coming to the Mac, and this could make games run 10 times faster on these desktop boxes.

The company made the announcement today at its Worldwide Developers Conference. Apple launched its Metal applications programming interface last year to give game developers and other visual-heavy app creators to more directly access the graphics rendering hardware on the iPad and iPhone. Now the accelerated graphics of Metal will show up in games for the Mac.

That’s a long way from the good old days, when Steve Jobs didn’t care about games on the Mac and Apple paid the price in lost market share to the PC. Nowadays, when it comes to gaming on computers, Windows rules. And the Mac could face even more competition as Valve’s Linux-based SteamOS begins appearing in Steam Machines, or living room gaming PCs, in October.

The Metal API is integrated into the Unreal Engine 4 game engine form Epic Games, which showed off how Metal graphics look in its upcoming release, Fortnite. This is a zombie-killing shooter and resource management game that has beautiful cartoon-style 3D graphics.

Epic’s Billy Bramer walked out onstage and showed the demo of Fortnite.

“Apple has amazed us again with Metal for the Mac,” Bramer said. 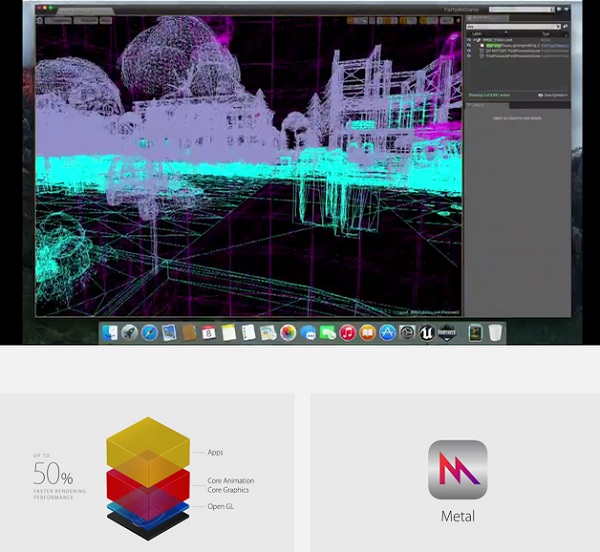 Above: The underlying wire frames of Fortnite on Metal for the Mac.