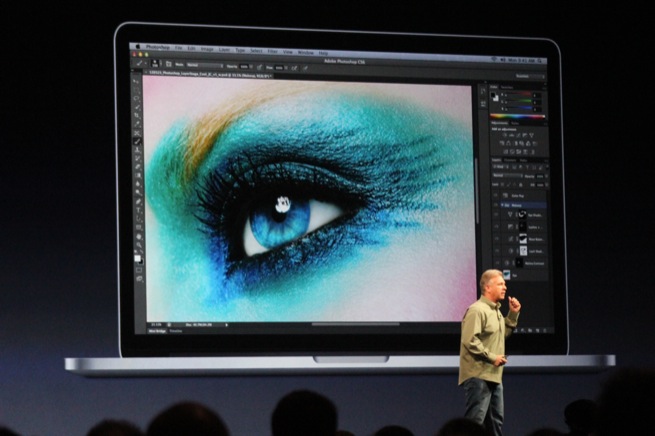 Apple introduced a new MacBook Pro laptop today that uses the “revolutionary” retina display that has been previously only used in the iPhone and iPad line-ups.

The new MacBook Pro has a 15.4-inch screen with a pixel density of 2,880 x 1,800 pixels, or four times the number of pixels in previous displays. The new display can show videos in ultra-high-definition and display apps with resolutions will look far more crisp than other kinds of laptops.

“Bringing uniformity across platforms is just wonderful,” said Van Baker, an analyst at Gartner. “Now you can look at apps on the smaller devices and then again on the laptop. It’s little things like that, a bunch of little things that are delightful little features that collectively make for a much better experience.”

Games will work beautifully on the Retina screen. Blizzard Entertainment’s Diablo III has already been modified to run with the new screen, using the crisp resolution to its full potential.

“You will see a gaming experience with this resolution that you have never seen before,” said Phil Schiller, senior vice president of Apple, speaking at Apple’s Worldwide Developer Conference (WWDC) event today in San Francisco. “This is the world’s highest resolution notebook.”

Typography “looks amazing, sharper than a printed page,” Apple said in a video. Apple says photographers have never been able to work on images with this kind of pixel resolution on the run.

“This led us to rethink everything in a notebook,” said Jonathan Ive, head of product design at Apple, in a video.

The 15.4 inch retina display model has 7 hours of battery life, is .71 inches thick (about as thick as the MacBook Air), and it sells for $2,199. It is mercury and arsenic free and is shipping today.