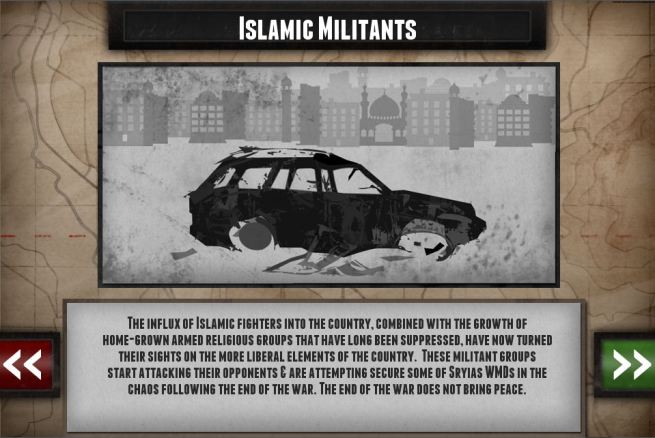 The consumer-electronics giant rejected Endgame: Syria, a game based on the conflict in that Middle Eastern country. Apple denied the game based on its App Store policy which forbids products from “solely target a specific race, culture, a real government or corporation, or any other real entity.” The Syrian conflict is a civil war involving armed rebels fighting against the Syrian government.

“This decision is a shame, really, as it makes it hard to talk about the real world,” said Endgame: Syria designer Tomas Rawlings. “We had hoped that Apple would be more nuanced in how they applied this rule, but we got a bit worried when it had been in submission for around two weeks without a decision – we then figured that because of the controversy of using the gaming medium to cover an ongoing war meant passing the game had become an issue for them.”

Endgame: Syria is a light strategy game that explores how the numerous potential outcomes of Syrian civil war will affect the many interested parties. It’s part of GameTheNews initiative, a project by developer Auroch Digital that uses games to bring understanding to current events.

“Our aim is to use games as a format to bring news to a new audience and submission processes such as this do make it a lot harder for us.  I get that Apple wants to make sure really offensive titles don’t pass into their store, but ours is far from that.  In fact the response to the game has been broadly positive with much of the mainstream media picking up on the story.  We’ll be making changes to the game and resubmitting it but it does mean we’ll have to strip some of the meaning and context from it to pass Apple’s submission process and that is not ideal.”

As games sit in the crossfire of a national debate on violence, it’s sad that a one has to cut out its meaning and context in order to gain access to a huge audience.

Endgame: Syria is HTML5, and anyone can play it on PC and even on iOS devices using a browser, if you’re interesting in seeing what Apple thinks shouldn’t be part of its ecosystem. You can find the game here.