After February’s crackdown, some of the other third-party app marketers turned tail and ran, changing their website marketing messages but remaining in business. Some turned down new customers. App marketer Gtekna, meanwhile, remains in business — though, as we explained above, the company has changed some of its own marketing language. Gtekna’s chief executive, Chang-Min Pak, granted us an interview, and he denied that his business was using bots.

Rather, Pak said that his company was merely paid to promote apps on a wide variety of web sites via banner ads. And in it contracts, Gtekna promised that it “will not use any offensive marketing methods such as spamming which may create a negative reputation to the application and the customer,” Pak said.

While Pak says Gtekna never used bots, he thinks rivals who’ve undercut him on pricing have resorted to these automated techniques. And, indeed, at least one other app marketing service openly describes practices that would provoke Apple’s wrath. Visit iSales Boost and you’ll find language that references “review generation.” AppMagenta now says it offers “promotion services for iPhone and iPad apps,” but it once guaranteed placement in the top 25. 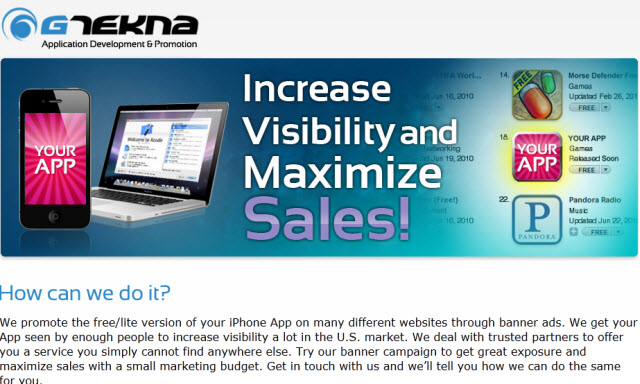 But Gtekna’s picture isn’t entirely clear. One of Gtekna’s former customers — who spoke only on condition of anonymity — confirmed that a Gtekna contract agreement from last year guaranteed placement in the Top Free list in Apple’s store. If the app didn’t hit the top ranks within five days, the customer could cancel the promotion for a full refund.

But after the promotion stopped, the app dropped like a rock. Adding insult to injury, it appeared the app’s popularity was mostly manufactured: According to Flurry, an independent analytics provider, more than 70 percent of all the new users never even opened the app. Our anonymous developer concluded that Gtekna had used either bots or masses of humans who were paid small amounts to download the app.

It’s impossible to determine if Flurry’s data speaks to market manipulation. It’s not uncommon, after all, for users to download apps to their computers and then wait days before transferring them to their devices. And for his part in the manner, Gtekna’s Pak said that it makes sense that “the ranking will fall after the campaign unless the app is so popular to get enough downloads to hold the ranking.”

“We stop a campaign 12 hours after we hit top 25,” Pak said. “In most of the cases, the ranking goes up to around 15th to 17th. Our partners give away gift cards to their members by drawing to encourage the members to click ad banners. For game apps, we’re told from a few developers that about 60 percent to 70 percent of people open the apps, and for nongame apps, we’re told that 35 percent to 45 percent are opened.”

The experience was very instructive to the developer that used Gtekna: It showed that there’s no substitute for quality content — a great app will generate its own downloads via human word-of-mouth. App marketing can provide a temporary boost, but an app will only stay in the top 25 if it’s really good.

Or if the developer continues to pay for marketing.

“You need muzzle velocity out of the chute,” said Lee Crawford, a critic of bot-driven marketing and a cofounder of social and mobile game developer Making Fun. “The question is, do I have what it takes to stay there, or do I have to apply marketing dollars to stay in the top 25?”

Animoca, the original publisher of Pretty Pet Salon, used Gtekna for marketing, but Gtekna was just one of many options Animoca tested. Pak said he had no idea why Animoca was banned. “I never heard from the client about it,” Pak said, “and there is no reason for Apple to remove our clients’ apps just because they used our service. We have no case where our clients lost their Apple developer programs, or had their apps removed by Apple.”

Indeed, thousands of developers have evidently used Gtekna, so it’s a mystery as to why Animoca had its apps deleted. Many developers — many larger and many smaller — had their apps marketed the same way but weren’t singled out. 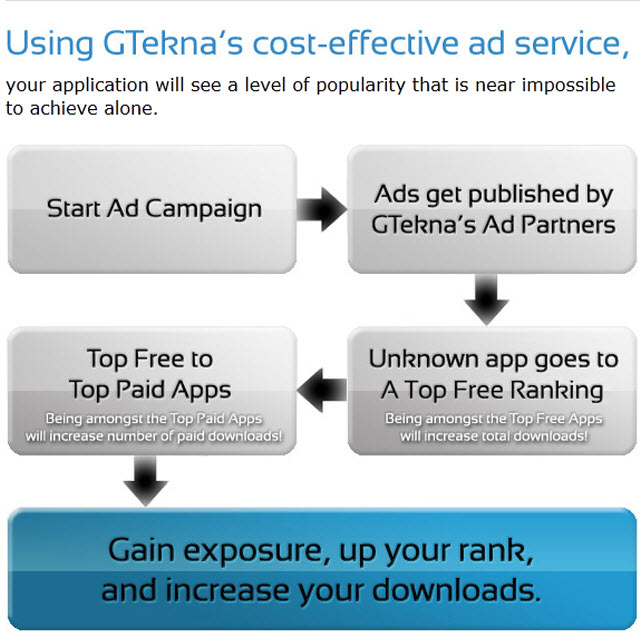