Appnext is releasing its self-serve advertising platform that makes it easier for mobile app and game developers to reach the right customers at the lowest costs. Most app and game makers have a big problem: getting their games noticed without over-paying for advertisements. Appnext is trying to address that.

The platform offers cost-per-install (CPI) bidding, allowing app advertisers to place direct bids on specific publisher sources. That means that you can target a user with an ad in an automated fashion and do it with both low costs and transparency in mind, said Elad Natanson, founder of Tel Aviv-based Appnext, in an interview with GamesBeat.

“We’ve worked to develop this platform for the last three years,” Natanson said. “We created a nice community of developers and are really happy about that. We had feedback that developers were promoting apps on other platforms, but they were getting the same recommendations for five or ten apps.”

“If you are a small developer, you can’t really get discovered properly,” Natanson said. “They can run campaigns and pay only for users who install their apps.” They can use Appnext’s campaigns to reach more than 230 million users, he said.

The platform has been available for a couple of weeks to members of the Appnext publisher community of 8,000 mobile publishers, the company said.. About 150 advertisers have set up campaigns for their apps. Now Appnext is making the platform more widely available.

“They can see exactly where their ads are being shown, and they can decide how much they pay for every user,” Natanson said. “They can optimize their ad activity without needing to go through an account manager.”

Natanson said it is an easy-to-use, self-serve platform where developers can adjust their CPI bids to reach positive return-on-investment for each source and scale the top-performing ones.

“In what has become a highly competitive environment for apps, acquisition is an exact science these days. Appnext’s self-serve platform is a game changer with the control and CPI bidding capability it provides app advertisers,” said Elliot Hool, vice president of marketing at Fabula Gaming, in a statement.

Rivals include Chartboost, PlayHaven, Tap4Tap, and LeadBolt. Appnext tries to give its app developers more control over where their ads will appear in terms of publisher, country, ad size, type of ad, and other factors. They can change these around without going through an account manager.

Appnext was founded in 2012, and it has 20 employees. It is self-funded. Appnext serves 5 billion app requests per month, and it recommends relevant apps to hundreds of millions of users. 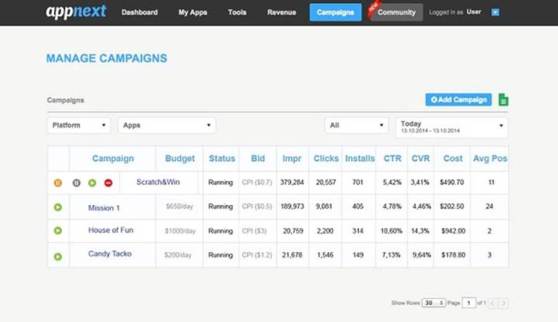