AppOnboard and Google are collaborating to bring playable demos directly into the Google Play store with a “try now” button. That button is prominently displayed right next to the purchase or download button, bringing us one step closer to instantly playable games.

AppOnBoard created a platform for playable demos and games that let people experience an app before choosing to download it from an app store. Google took notice and began working with AppOnBoard to use the platform to power a new feature called Google Play Instant Apps. Both companies hope it will improve the discovery and stickiness of apps, reduce the friction associated with trying out a game, and counteract the growing ineffectiveness of mobile advertising.

The partnership is a big endorsement for AppOnBoard, whose platform was previously only available to partners on the AppOnboard advertising network. Now the reach is much bigger, as Google added the ‘Try Now’ button, so a user going to the Google Play store now has the install option and the ‘Try Now’ option. The demos can be as much as ten megabytes, or a large enough slice of a game to give players a real sense for what it’s like. That means that a player who downloads the game after trying it out is far more likely to follow through and play it, since that player already knows what the gameplay is like.

“This is a pivotal change for our entire business,” said Jonathan Zweig, CEO of AppOnBoard, in an exclusive interview with GamesBeat. “Most people know us as an ad network. Now our demos are available on the Google Play store.”

AppOnboard App Store Demos have helped top global developers quickly get to market with Google Play Instant without having to commit months of valuable engineering resources to re-create their apps in a smaller, instant size. Recently, AppOnboard App Store Demos have even been used to drive pre-release engagement and pre-registration on Google Play for highly anticipated upcoming launches.

Jam City, was one of the first 10 developers to launch a Google Play Instant app in March 2018 with Panda Pop.

“We were able to launch Cookie Jam Blast as a Google Play Instant app in a fraction of the time thanks to AppOnboard” said Vanessa Rouhani, vice president of publishing at Jam City, in a statement. “Using AppOnboard’s technology, we also found that Cookie Jam Blast Instant viewers outperformed organic installs by over +29-32 percent across day 1 to 7 retention.”

Scopely’s Looney Tunes: World of Mayhem is another example of a mobile game that has used the AppOnboard technology to power a Google Play Instant app and is one of the first uses for pre-registration.

App Store Demos leverage AppOnboard’s playable demo engine, optimized creative, and user behavior analytics which have previously only been available to partners on the AppOnboard advertising network. App Store Demos save developers precious time and resources by allowing for a fast to market instant app launch as well as continued creative iteration and optimization. AppOnboard also leverages its patent-pending heat map technology to provide aggregated touch feedback on how users are engaging with the App Store Demos, leading to insights and optimizations for developers.

Bryan Buskas, chief operating officer at AppOnboard, said in an interview with GamesBeat that AppOnBoard creates the playable demo for game developers and licenses its tech directly to the developer.

“Our long-term vision is aligned with Google’s,” Buskas said. “You should be able to play and experience any app or game without a download.”

Los Angeles-based AppOnBoard was started in 2016 by Zweig and cofounder Adam Piechowicz, who was one of the cofounders of AdColony, which Opera bought in 2014 for $350 million. Zweig took time off to travel the world, and then he came back and started studying the ad business (at GamesBeat Summit 2016). While watching his niece skip ads, he felt that advertisers wasted a lot of money on ads to get users who weren’t that interested in using apps. Zweig’s idea was to take the onboarding experience out of the app and turn it into an ad to draw in new users.

The company spent two years developing its tech for creating simple demos of mobile games and apps. Zweig’s team built a mini game engine, like a mini version of Unity, that allows any game or app to be re-created in a small form inside an advertisement. It wouldn’t be the whole game or app, but it would reproduce the core loop or the heart of the experience.

At the Game Developers Conference in March, Google started touting Instant Games, or those that could be played without downloads. Meanwhile, AppOnBoard said that games that use the playable demos generate 32 percent better retention, or return players, as well as better monetization. That’s because there is a higher quality user downloading the game after knowing they already like it, Zweig said. This caught Google’s attention.

“They heard about our native technology and we worked with them for 120 days,” said Zweig. “It’s surprising to us how fast it happened.”

In addition to doing playable games and demos, AppOnBoard can optimize creative results and provide user behavior analytics. The analytics include patent-pending heat map technology to provide aggregated touch feedback on how users are engaging with the demo. It also gives developers a way to test a game concept as a playable demo, learn from it, and then revise the game as needed for a full launch later on. 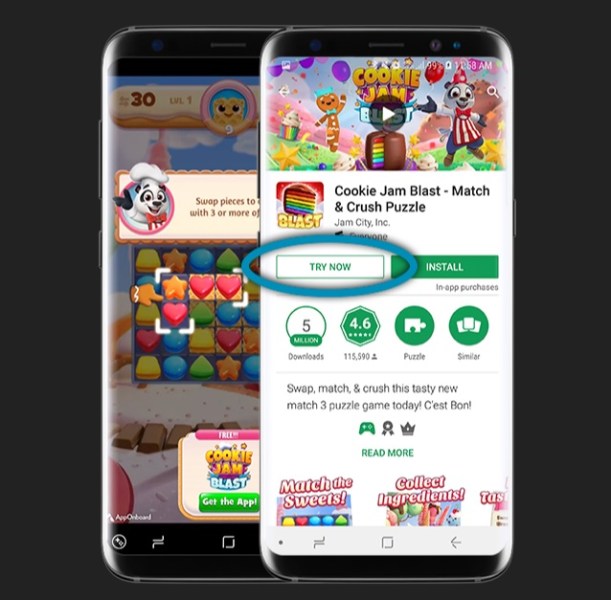 Above: You can’t miss the Try Now button.

AppOnboard is offering a 30-day free trial for any App Store Demo. After 30 days, the developer pays a monthly flat fee. Ultimately, Zweig said that the “idea of a storefront itself may go away, as games will be playable instantly in any location.”