Apportable has raised $5 million in a new round of funding to finance a game development tool that enables developers to take Apple iOS games and get them to run Android mobile devices in a native format. That means those games can run in a speedy fashion with no compromises. 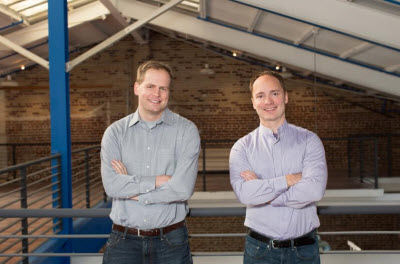 Above: Collin Jackson and Ian Fischer of Apportable.

The company was able to raise the money because of the strategic significance of what it does. Not only does it help game developers lower their costs by enabling them to build once and publish on both major mobile game platforms, it also help Google’s Android to more easily catch up with iOS when it comes to getting equal time from game developers.

The San Francisco-based Apportable released its second major game-building tool, SpriteBuilder 1.0, on Jan. 21. The suite is the first Objective-C cross-platform development suite. Objective-C is a programming language that Apple uses for its OS X and iOS operating systems. SpriteBuilder compiles code in Objective-C so that it runs on Android devices.

More than 3,000 developers have already downloaded SpriteBuilder. Apportable says that those who adopt SpriteBuilder 1.0 will be able to rapidly build iOS and Android games with Objective-C and Xcode, an integrated development environment for Apple-related code.

Apportable claims that SpriteBuilder is the only game development suite that enables a developer to run Objective-C code as a native application on Android. That means it runs faster and more efficiently than apps that are written with other cross-platform game tools.

“We get native bare-metal performance,” said Collin Jackson, the CEO of Apportable, in an interview with GamesBeat. “Our mission is to provide the best platform for mobile apps.”

Last summer, Apportable scored a big coup. Music artist Bjork created the ambitious multimedia app Biophilla on iOS. Her developer tried to convert it to Android, but the project hit cost overruns, and Bjork cut the project short after a month. But Apportable stepped up, met with the developer, adapted the code using its Android Compiler, and had playable code within an hour.

Jackson has a doctorate in computer science, and cofounder Ian Fischer has expertise in mobile graphics.

“We have a very engineering-centric culture here and that has enabled us to build a very complex product,” Jackson said. 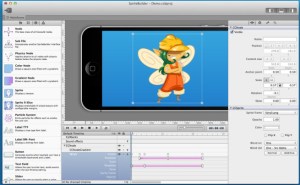 SpriteBuilder, which is based on open-source technology that has been around for years, has a visual editor that enables developers to create prototypes and build games with tools that are more intuitive, the company says. Designers and developers can work together to reduce development time. The suite is based on an open-source platform that developers are free to extend under an MIT-supported open source license. Apportable charges for commercial support and upgrades.

Apportable has 53 employees. The company had previously raised $2.4 million from Google Ventures, Initialized Capital, and other investors. It participated in the Y Combinator accelerator program and it was in the fall 2013 class at the StartX accelerator program at Stanford University. Fischer will participate at StartX’s Demo Day today in Los Altos, Calif.

Apportable was founded in 2011. Revenues are growing fast, and the company is now generating millions of dollars.

Rivals include HTML5, but games written in that format aren’t yet capable of delivering native-like performance. Spaceport.io also tried creating tools for cross-platform apps, but it ran into delays. Facebook acquired the team making Spaceport.io, but it decided not to purchase the technology itself. Unity-based games are also easier to make cross-platform, but not in the same way as native Apportable apps, Fischer said.

Apportable has a free version of its technology as well as a $1,000 version of Sprite Builder 1.0 with more features. It also has an enterprise version that generates the bulk of revenues.

Fischer said the time it takes to convert a 2D app from iOS to Android using SpriteBuilder 1.0 depends on the task at hand. In general, it takes about a month or so.

“This team has pulled off what most of us thought was impossible and I’m excited to see where it goes from here,” said Ohanian, one of the investors. “With Apportable, any iOS developer can launch a native app on both platforms without the massive headaches and expenses normally associated with producing and distributing an app for both Apple and Android devices.”