AppsFlyer is launching its predictive analytics solution, PredictSK. This will be a product that supports game and app developers as well as advertisers in the wake of Apple’s new privacy mandates.

By the end of March or so, Apple will enforce its AppTrackingTransparency (ATT) framework and change the rules for the Identifier for Advertisers (IDFA), requiring users of iOS 14 devices to opt-in to allow their personal data to be shared with third parties for targeted advertising. Apple said the average app has six trackers in it, mostly done without users really know what’s being shared with who, and the company wants to put an end to what Apple CEO Tim Cook called the “data-industrial complex.”

The problem for game companies is that it has taken years to evolve the business model for free-to-play mobile games, where players get their products for free in exchange for being targeted with monetization offers. This model has worked so well that mobile gaming has become 58% (SuperData) of the $174.9 billion (Newzoo data) game industry. And now mobile game companies will have to find a new way to identify and advertise to the most enthusiastic mobile gamers.

Game companies fear that won’t be easy to get users’ approval anymore. That could hurt companies that rely on targeting advertising, including Google, Facebook, and others. In particular, it hurts companies seeking to find the small number of gamers who spend a lot of money in free-to-play games, according to user acquisition expert Eric Seufert. He predicted Facebook could lose 7% of its revenues, or billions of dollars. Google also predicted some harm for small companies but said it would comply with Apple’s policies.

To deal with this, game companies have said they will do more broad advertising campaigns, scale back their advertising, or turn to games with intellectual properties that don’t need much advertising, such as games based on Marvel characters. Or they can use the tools that Apple still lets advertisers use, and that’s where AppsFlyer comes in. AppsFlyer works with more than 12,000 brands and 8,000 technology partners.

“What once was more abstract a few months ago is now more clear since it’s around the corner,” said Barak Witkowski, vice president of core product at AppsFlyer, in an interview with GamesBeat. “App advertisers have some dramatic decisions to make now.”

Above: Tim Cook, CEO of Apple, is a big advocate for privacy.

Instead of precise targeting with IDFA, advertisers can get some data on advertising results, but not in a very precise way and not in real time. Apple’s vehicle to deliver this information is SKAdNetwork, which lets advertisers collect some rough data about the results of an ad about 24 hours after it has run. Apple presumably believes this kind of data sharing will still protect a user’s privacy.

AppsFlyer is trying to help developers and advertisers to get the most out of the SKAdNetwork with something AppsFlyer calls SK360. This product will gather information and show it to clients, simplifying it for them so they don’t have to write a single line of code, Witkowski said.

While sympathetic to advertisers, Witkowski said AppsFlyer doesn’t disagree about the trends with privacy, as people care about it more.

But he said that attribution — or figuring out what effect an advertisement had on a user — was already a complex matter. And now it will become even more complex. 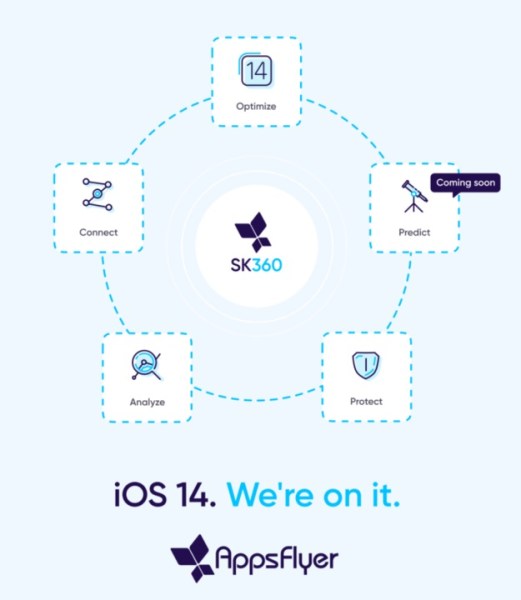 Above: AppsFlyer is helping advertisers deal with privacy changes.

“It’s not one solution,” he said. “There isn’t one optimal solution now. We are launching our holistic SKAd Network solution.”

AppsFlyer will also launch PredictSK, a new predictive analytics solution that will be a part of its SKAdNetwork suite, SK360. The predictive product will try to forecast whether a new user will be loyal when it comes to using an app or game over the next 30 days.

With only 24 hours of user activity to work with, optimization is nearly impossible, AppsFlyer said. With PredictSK, advertisers will be able to leverage early signals of engagement (in the first 24 to 72 hours) to predict long-term campaign performance. PredictSK puts mobile attribution in SKAdNetwork on “auto-pilot,” removing the measurement and timing barriers and allowing advertisers to maintain and strengthen their competitive edge in this new reality.

The new product will be available after Apple will start enforcing its AppTrackingTransparency framework in early spring. The SK360 suite will continue to support the ecosystem throughout Apple’s upcoming privacy updates.

“We’ve been working on algorithms for predictive analytics even before SKAdNetwork was around,” Witkowski said.

Above: AppsFlyer measured the impact of IDFA changes on marketing in November.

Many developers have been uncertain about the details around ATT. In a survey by AppsFlyer in November, about 37% of brands said they were pretty clueless about what the IDFA changes would mean for them. But Witkowski said AppsFlyer has learned what it could through talking with the industry to maximize what developers and advertisers can discern from the new Apple platform.

Witkowski is expecting Apple’s SKAdNetwork to become a major part of campaign measurement and optimization on iOS. This deterministic attribution framework provides advertisers with some data on their iOS campaigns, and while Apple has been continuously making updates to improve its offering to advertisers and app developers, it also introduces critical limitations, he said.

Apple has improved SKAd Network over the last few months. And due to the changes in iOS 14, it’s about to be much more dominant, he said. It is privacy aligned, but it has some disadvantages that the SK360 tries to overcome.

“SKAd Network is far from being optimal in the way that it was defined by Apple,” Witkowski said. “The data flow is very complex. The information is sent to the ad networks and not to the advertiser.”

Instead of having thousands of details about users and campaigns, the advertiser can now only measure 63 pieces of information.

“The most important thing for an app owner right now is to build the right strategy about what they measure about the user in this field,” Witkowski said. “Your option to measure the lifetime value of a user is much harder. Furthermore, you can measure only events happening in the first 24 hours or so.”

SK360 helps customers collect all the information from different networks. The advertisers can get this data without having to write a single line of code.

“They configure everything in our dashboards. And we’re doing all the heavy lifting,” Witkowski said. 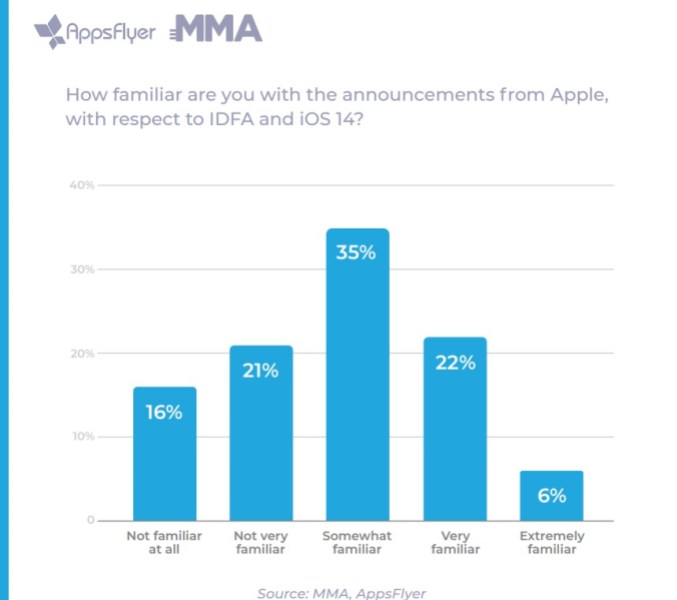 Above: Mobile marketers are confused by Apple’s IDFA change, based on a November survey by AppsFlyer.

To equip advertisers with the ability to continue driving positive results and accurately enhance their campaigns, AppsFlyer has added a new suite to its set of iOS 14 solutions — SK360. This comprehensive suite of tools enables brands to configure and optimize their conversion value, validate their data and keep it fraud-free, and integrate with their choice of partners, all through a dedicated, centralized analytics dashboard. Networks such as Facebook, Twitter, Snap, IronSource, and dozens of others have already signed on to ensure that relevant data such as postbacks and conversion value schemas are seamlessly delivered to AppsFlyer and any chosen partners.

“We’ve been working closely with AppsFlyer to deliver a fully operational plug-and-play SKAdNetwork solution in record time,” said Liwei Chen, staff product manager at Twitter, in a statement. “The solution was designed together to validate all advertisers’ needs from SKAdNetwork are met: data trust, granularity, optimization, and measurement. This is another exciting step for advertisers, delivering upon our promise of helping drive business success while maximizing end-user privacy.”

PredictSK, AppsFlyer’s predictive analytics solution for SKAdNetwork will be officially rolled out later this year, in line with Apple’s ATT enforcement, as part of the company’s SK360 suite. One of SKAdNetwork’s limitations is the very short window advertisers are expected to rely on for measuring campaign performance.

“Since the very beginning, AppsFlyer has been leading iOS 14 innovation, with full transparency to us about the solutions as they became available, “said Dmitry Pinchuk, vice president of marketing at SocialPoint, in a statement. “As a privacy-oriented brand, it was imperative to us that we get on board with the new privacy features for iOS 14. AppsFlyer has helped us understand the new rules, workarounds and successfully drive marketing success.”

Witkowski said he believes Apple’s changes won’t be the end of the world.

“What sounded like a very limited solution actually now pushes the entire industry to be super creative and innovative,” he said. But he added, “Even with all the things we have created here, SKAd Network is still limited.”