I’ve long wanted an arcade machine in my home. And for the first time ever, that dream feels attainable. That’s due to the relatively affordable Arcade1Up machines that repackage classic games into slightly smaller cabinets.

These are three-fourths scale replicas with a 17-inch LCD monitor. Arcade1Up officially licenses classics like Rampage and Super Street Fighter II: Turbo, and each of its different arcade cabinets come with a collection of games and the appropriate controls for its bundle. For example, you can get a machine that includes Asteroids, Tempest, Major Havoc, and Lunar Lander that has a spinner control.

The Arcade1Up cabinets are available now. You can find them at Walmart, GameStop, Target, and other retailers for $300.

The Arcade1Up machines do not cost thousands of dollars. They are inexpensive imitations of the real thing. That means they don’t weigh a lot, they don’t use CRT monitors, and they’re not going to use name-brand buttons and joysticks.

But they absolutely capture the feeling of playing on a real arcade machine. I’m testing the Rampage unit, and it has enough controllers for three simultaneous players. And when you have everyone sitting elbow-to-elbow on the machine playing through games like Gauntlet, you’re going to remember why arcade gaming is so much fun.

That’s a huge thing to capture in an easy-to-assemble package that you can buy at Walmart for $300. 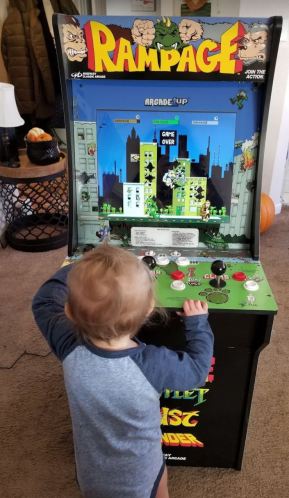 Above: At three-fourths scale, even someone who is just 2.5-feet tall can enjoy some Rampage.

The Arcade1Up cabinets have the striking look you want from arcade hardware. They have the flashing attract-mode screens that draw your eye from across a room. And the chassis itself uses wood and not plastic, so it doesn’t look like a toy.

The Rampage machine has an exact re-creation of the art from the original Rampage cabinet on its front and control panels. On the sides, it has a more generic design. But it all looks fantastic and professional. And by that I mean, it appears authentic enough to sit a room full of other arcade machines. You’ll notice the size difference, but that’s it. Otherwise, it would look like it belongs.

Compact enough for a bedroom or small rec room

And the look is a big reason you’ll want this, because the three-fourth scale means it should fit nicely inside your home. You won’t have to hide it away in the garage or basement. It could go into a kid’s bedroom or in the corner of a rec room.

The machine is 4 feet tall, which makes it perfect to play while sitting down on a stool. And even very young children should have no trouble standing up to play their games.

If you want the full, stand-up arcade experience, Arcade1Up does sell a separate riser that brings the cabinet up to full height. But I haven’t felt the need for that.

Arcade1Up is using some cheap components. Specifically, the joysticks feel like they’re going to give out and stop springing back into place after a few weeks. Even when they’re operating as they should, they just don’t have the bounce back that I would like to feel. They get the job done, but that’s about the best I can say. And if they do stop working, you can get higher-quality replacements from Chinese manufacturers on Amazon at a fair price.

The biggest issue with the Arcade1Up is that, eventually, it’s probably just going to sit untouched in the corner. I would make sure that you get a unit that has games that you are interested in returning to regularly. The Street Fighter unit seems especially nice if you have friends who come over regularly.

But these are all retro games. You probably have a million ways to play any of them, and if you aren’t already going back regularly, I don’t think putting it in an arcade cabinet will change that. Sure, you’ll want to play them for a while as is, but that will wear off.

With that said, I would make sure that you’re OK with getting an Arcade1Up as a decoration. Think of it as putting a jukebox in your home. You’ll probably still play music from your modern stereo system, but it’s cool to have the jukebox to create an atmosphere. The Arcade1UP is excellent at doing the same thing. And then, if someone new comes over, I’m always willing to hop on and play more Gauntlet.

So who is the Arcade1Up for? It’s not for enthusiasts, unless you’re big into modding. If you want to get an Arcade1Up to have a compact cabinet for your Raspberry Pi setup, then go for it. It’s great for that. But if you’re big into the history of arcades or you’ve already built your own machine, you don’t need this.

Instead, I think the Arcade1Up is for families. If you are looking for a big-ticket item for the holidays or a birthday, the Arcade1Up has the potential to fill that role. If you want to put something else in the finished basement next to the foosball table, this is it.