The Lost Arcade is part documentary and part eulogy for the iconic New York video game arcade Chinatown Fair in all its messy, beloved neon glory. People would embark on pilgrimages there to play the games they loved in a community that some described as family. Battles were fought through classic fighting games like Tekken, and rivalries were born. When Chinatown Fair shuttered its doors in 2011 after nearly 30 years, it felt personal for a lot of people.

And it was personal — then-owner Sam Palmer was reluctant to sell and said that the arcade was where he belonged. Filmmakers Kurt Vincent and Irene Chin captured the emotional fallout in an intimate way in The Lost Arcade. They also showed that the arcade business is not what it used to be and — despite the sentiment some people attach to it — at the end of the day, it’s still a business.

Though arcades are still very much alive in Asia, they underwent a slow extinction in the U.S. A handful have survived, and a few new ones have sprung up but not without adapting to the times. Gone are the arcades that survived solely on spare change and the newest Street Fighter cabinet. Most modern establishments now count on revenue from more than just video games, and a few different business models have sprung up. Under new management, Chinatown Fair has now rebranded as a family fun center. Barcade marries retro arcade games with craft beer and features brewery-centric events. Even Next Level, the spiritual successor to the original Chinatown Fair, has changed with the times and now incorporates live-streaming events.

“When I first took over, when we first changed management, it was extremely difficult for the first two or three years,” says Lonnie Sobel, one of Chinatown Fair’s current owners. “It took years to change it around because word of mouth takes time.”

He describes his business model as a cross between Chuck E. Cheese’s (a chain of family entertainment centers) and Dave & Busters (a more grownup flavor of entertainment with games, food, and alcohol). The way he figures, the arcade business is similar to the movie industry. When movies came out on video tape, people stopped going to the theaters. Mom-and-pop operations suffered, and the ones that survived upped their game with nicer amenities like plush chairs and 3D screens. And, eventually, the moviegoers came back to the theaters.

“Initially, when the consoles started to become big and the Internet started to be the place to go, everybody was just playing games at home,” Sobel says. “But eventually, they realized that there are other games they can’t play in their homes. You can’t go and play a big racing game or a gigantic dancing game unless you have half a million dollars worth of equipment in your house.”

Under Sobel’s management, the revamped Chinatown Fair has 35 to 40 games at a time: ticket games, shooting games, photo booths, punching bags, basketball, air hockey, skeeball, dancing and rhythm games, and yes, some fighting games as well. The overall strategy is to provide as much variety as possible to lure people in, promising a shared social experience that can’t be replicated on the home console or PC. 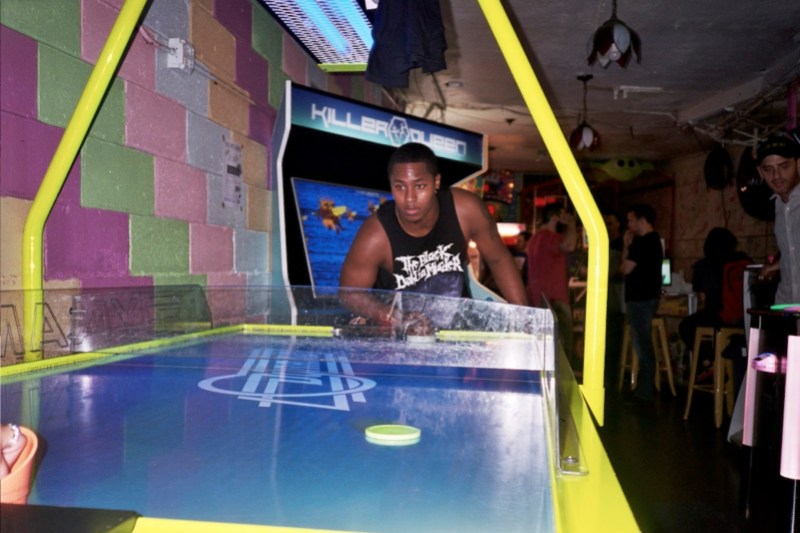 Above: The new Chinatown Fair features games like air hockey.

“We’ve made it so every single age group can have a good time there,” Sobel says. “That’s basically the name of the game in order to be able to survive and thrive as a family fun center.”

The dancing and rhythm games are the most popular, Sobel says, making up about 30 percent of the business. Aside from the games, he also makes a good amount of his revenue from events. Birthday parties happen frequently, and private events less so, around 20 or 30 times a year. It costs up to $950 an hour to rent out the place for a private event during prime weekend hours, though the average customer who books one spends about $350 to $500 an hour.

The strategy of having a wide variety of games has certainly worked out well for Dave & Busters Entertainment. Perhaps the most well-known arcade-style venue, it reported a revenue of $1.005 billion in fiscal year 2016, a 15.9 percent increase from the year before. An annual report noted that the bulk of this revenue — 55 percent — came from games. “Redemption games,” which reward players with tickets that are redeemable for prizes, were the most popular, about 79 percent of the games played.

Ghosts and goblets of beer

Other modern arcades draw their revenue primarily from other aspects, such as drinks. Brooklyn-born Barcade, for instance, is equally about recreating a vintage arcade feel as much as it is about craft beers. Fueled by a love for both, CEO and cofounder Paul Kermizian opened the first Barcade in 2004 along with three friends.

“I was a filmmaker before I was a bar owner,” says Kermizian. “I directed a documentary about the craft beer industry, so that was how we ended up focusing on craft beer, but I was also a collector of video games.”

It started with four cabinets in Kermizian’s apartment, and now, Barcade is about to open its seventh location on the East Coast. Kermizian estimates that an average of about 6,000 people come to each location per month based on the average check amount.

He says that they have to constantly play with the formula, depending on each location. Each area also has different demographics, so the locations have to have different hours and games as well. Primal Rage, for instance, did well in the St. Mark’s location in Manhattan, but when they moved it out to New Jersey, it received a lukewarm reception.

“We’ll move games around,” says Kermizian. “Sometimes, we even move it within the location. We move it to a different place in the same bar, and it does better.”

Barcade mainly attracts a casual gaming audience, though the St. Mark’s location has more of a serious gaming crowd. St. Mark’s also earns the most revenue from games; in other locations, about 12 to 15 percent of revenue comes from games, whereas in St. Mark’s, it’s about 25 percent from games.

“Our most highly game-centric location is St. Mark’s by a lot, probably,” says Kermizian. “That’s somewhat a product of that it’s a small space packed with a lot of games — and a lot of fighting games, so we get a lot of real serious people coming in to play.”

Though Barcade has hosted the occasional gaming event, such as high scores contests, they haven’t been a huge draw for its casual audience. Most of their events are instead centered on craft beer, sometimes highlighting regional breweries.

Following Barcade’s success, there has been a wave of other arcade bars across the country. Kermizian says of Barcade’s appeal, “[People are] attracted to the idea that this is one of the few places in the area that has a classic arcade and an arcade environment.”

While the majority of arcades are now catering to casual players, there’s still a home for more serious gamers at arcades like Next Level in Brooklyn. Owned by Henry Cen, the former manager of the original Chinatown Fair, Next Level is something of a successor for those in the fighting game community. Cen was and is still part of the community, something that he feels has to be earned on the virtual battlefield.

Part of the appeal of Next Level, Cen says, is that spirit of competition. He views it as a place where players go to get better, to scope out the scene, and to learn from others.

Cen opened Next Level in 2011 shortly after the original Chinatown Fair closed shop. Though he’s community focused, he also keeps a sharp eye on customer demand and the cost of doing business.

“It’s different today because you have to buy a lot more games. I would tell you that that’s one cost,” Cen says. “You can’t just get a game there and sit there and pretend it’s going to generate revenue. You have to inform the consumer about how to play the game.”

Other costs include marketing, which Cen says you have to do aggressively, as well as maintenance and, of course, the legendarily high price of New York rent.

Next Level has expanded beyond older cabinet games. In addition to fighting games and Dance Dance Revolution rhythm games, it has more modern console games, hosts livestreams of competitions, and sells trading cards. Cen says that the bulk of its revenue still comes from the fighting games community at about 46 percent while 16 percent comes from drinks and snacks and the remaining 38 percent is from trading card games. An average of about 200 people come to the arcade every week, mostly recurring customers. 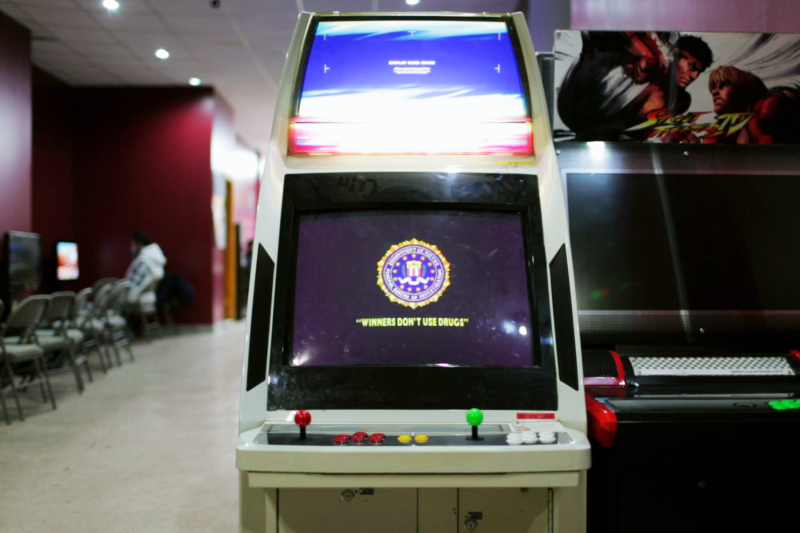 Above: Next Level is the spiritual successor to the original Chinatown Fair.

The events page on the Next Level site alternates between streamed fighting game competitions and trading card tournaments. He describes the arcade as being somewhat in transition, largely due to the popularity of esports, and streaming is becoming an increasing part of its strategy. Streaming and other gaming-related videos have been growing steadily in recent years. It’s a sector that’s slated to generate $4.6 billion this year, according to market researcher SuperData.

“[Streamers] help generate revenue and also marketing because the stream itself generates revenue also,” Cen says. “The more viewership you get, the more potential there is. So, it’s like a TV show.”

The caveat, though, is that streaming fighting games hasn’t reached quite the level as esports staples like League of Legends and Dota 2, which are both multiplayer online battle arena games. Cen believes that in a few years, fighting games will become more accepted in the esports mainstream.

Though Cen is certainly passionate about the community and is hopeful for more mainstream acceptance, he also warns against getting caught up in emotions while trying to run a business.

“Don’t fall in love with your business, or you won’t see all the problems,” he says. “Especially a business that you’re more passionate about, you won’t see the flaws.”

This seems to be a part of the legacy of the original Chinatown Fair. It was an important landmark for a fledgling community, but it was also a cautionary tale for those who followed in its footsteps.