Arcturus today announced it has raised $5 million in funding for tools that enable developers to create realistic holographic characters based on recorded video.

Arcturus’ funding will go toward hiring more developers, expanding sales, and adding to the product line, with an emphasis on livestreaming features. The aim is to become the global software leader in the post-production and streaming of volumetric videos.

The company was founded by a management team with product, art, and science backgrounds from Netflix, Autodesk, Pixar, Dreamworks, Google, YouTube, and Uber. 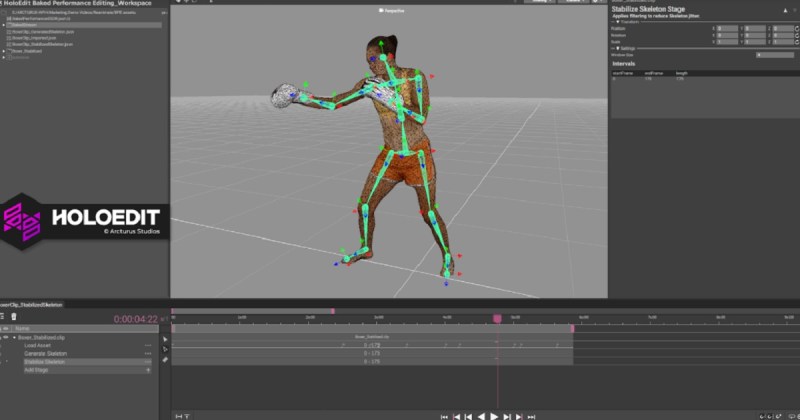 Above: HoloEdit makes it easy to animate 3D humans.

Image Credit: Provided by Volumetric Camera Systems and the second is Footage Provided by TetaVi

Arcturus is targeting its immersive content experience across a range of verticals, including ecommerce, music, sports, interactive media, and gaming.

Volumetric video lets users consume live-action content in new ways, from viewing sports in holographic form to experiencing photorealistic virtual performances and engaging with interactive digital human assistants and more immersive forms of social media and ecommerce, in which buyers can view and interact with products in 3D.

With volumetric video, content is captured by an array of cameras and depth sensors that surround a subject to create a photorealistic model. These holograms are fully 3D and interactive, making them a fit for any spatial experience, such as in augmented or virtual reality.

Arcturus’ flagship product is HoloSuite, a service platform for editing and distributing volumetric video, which consists of HoloEdit and HoloStream. The HoloSuite platform enables users to author, edit, and stream volumetrically captured performers and environments, and users can interact with it on any desktop browser or smart mobile device.

HoloEdit is an optimized pipeline for editing and processing volumetric video. It enables content creators and game studios to easily edit and compress clips and then distribute them to third-party tools, including real-time game engines like Unity, Unreal, and more. HoloStream is an adaptive streaming solution extending the technology streaming giants Netflix and Amazon Video use to stream volumetric video directly to the viewer.

Arcturus CEO Kamal Mistry said in a statement that the company aims to create a future in which digital human holograms are captured from reality and customized and can then interact with a viewer in real time. This can take the form of digital customer service agents, human avatars, virtual 3D concerts and fashion runways, and access to a professional athlete’s perspective in broadcast sports.

The company has 21 employees.

In response to questions, the company said that in HoloSuite, the true three-dimensional nature of a human performance, including the nuances of how skin, hair, and clothes move is inherent in the video capture and the platform enables puppeteering and enhancement on top of this three-dimensional video capture.

This is an inevitable evolution however it’s hard to predict how quickly it will take due to the extended life cycles of game technology development, the company said. One thing is certain, the demand for more realistic performances in interactive media such as games is not letting up, and technology is enabling even more immersive and realistic experiences for game audiences with increasingly shorter production timeframes.

Arcturus has customers among telecom and content enterprises, publishers, brands, and creators. Those include Warner Media Innovation Lab, NTT Docomo, Verizon, and Vive Originals. HoloSuite works with Unity, Unreal, and the web.

With advances in real-time gaming technology and the photorealism convergence in film and games, more gaming companies are looking for ways to create even more realistic humans in their game content. While it is early days, the company is are seeing examples of Volumetric Video being used in games, first in cutscenes and interstitials, and we see this evolving to a point where volumetric video captured actors will be used in primary gameplay.

While new companies are emerging to provide various pieces of the production pipeline, including editing tools as well as delivery tools, Arcturus said its solution is elegant in that it is a one stop shop for editing content and delivering it to any end target, be it web, mobile, and/or game engine.