Apple showed off some upcoming augmented reality apps at last week’s keynote event. With the iOS 11 launch today, people will be able to download and give AR a try for themselves.

Earlier this year, Apple tried to hype up developers by unveiling its ARKit software development kit at its Worldwide Developers Conference and showing its commitment to the future of that technology. In addition to apps like Major League Baseball’s At Bat, which will be getting an AR overlay featuring info like player stats, a number of games will be hitting the Apple App Store. These include the Apple exclusive The Machines from Directive Games as well as an AR version of Warhammer 40K: Freeblade.

Here are a few of the AR games that will be available soon: 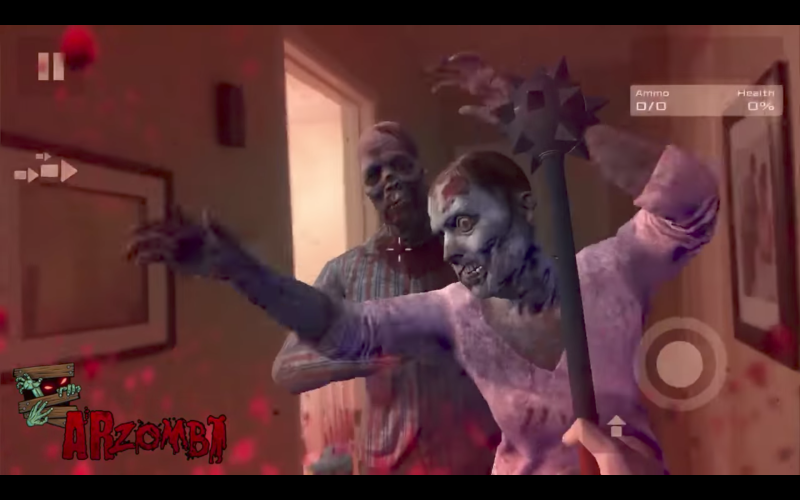 Unlike the upcoming The Walking Dead: Our World from Next Games, ARZombi isn’t about going around in the real world and finding zombies like they’re dark-type Pokémon. Instead, it turns your home into a battleground with the undead. As zombie hordes attack you in your living room, you’ll be able to defend yourself by shooting them and boarding up doors and windows. ARZombi will be available sometime this fall.

The initial release will feature Survival Mode, where increasingly large waves of zombies lay siege on your house. Dynamic Augmented Solutions CEO Michael Dykier says that in October it’ll release Story Mode, which will be more episodic and include choices you might find in a choose-your-own-adventure book. They’re also working on a multiplayer mode, which Dykier says they can’t talk about at this time but he describes it as “epic.”

Dynamic Augmented Solutions started out in the haunted attraction industry, where it worked on lighting, audio, and animatronics. They gradually began experimenting with adding AR ghosts and ghoulies to the attractions, and they created an app called the Phantom Finder, which was part of Knotts Berry Farm’s Haunt Museum event last fall. Dykier says that creating ARZombi in three months (ARKit was announced in June) was a challenging endeavor, but their in-house beacon mesh tracking system was a big help.

“What we hope to achieve, in some way incrementally, is a modular experience that changes depending on where you play it,” said Dykier. “Rather than in traditional games where the developer defines every scene — from the size of rooms down to the very color of the carpet, we allow you to choose where you will stage your final stand against the oncoming zombie invasion.” 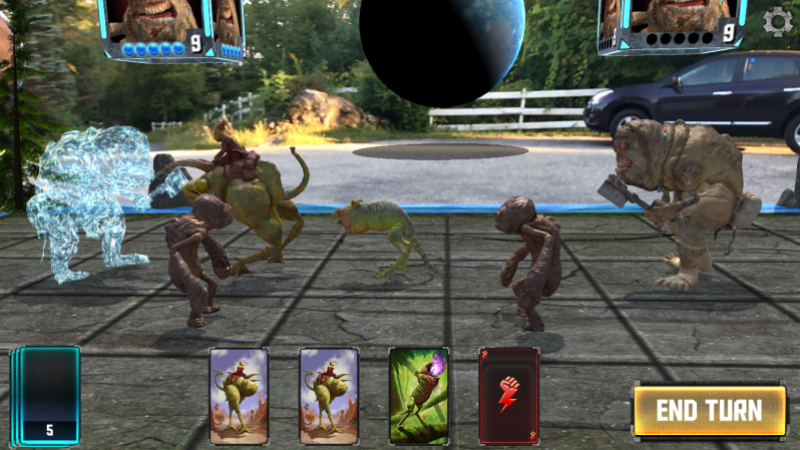 Star Trek fans might still be waiting for a true Holodeck experience, but Star Wars fans got their holochess fix when HappyGiant released HoloGrid: Monster Battle late last year. The monsters’ designs are from Phil Tippett, who specializes in creature design among other things. He also created the Star Wars holochess scene, which HoloGrid traces its roots from.

The first incarnation of HoloGrid was a mashup of mediums: a card game where each card is scanned by a player’s tablet and a corresponding minion is summoned on-screen in AR. It was compatible with the Microsoft HoloLens, a mixed-reality headset that has impressive tech but an equally off-putting price.

Earlier this year, HoloGrid eschewed physical playing cards and entered virtual reality, launching on the Samsung Gear VR. And now it’s taking on AR with a free-to-play game, HoloGrid: Monster Battle AR. Though the main gameplay will be similar, the latest version will feature item drops and a new “evolution system.”

“On the AR side, there was a lot we could leverage from the original mobile AR game but just as much had to be re-thought, as now players are moving around, holding their device to play,” said Michael Levine, HappyGiant’s CEO. “Fortunately, because we also had made the [Google] Tango version, we also had elements we could use to pull from that. We then built more of the UI into the AR space and tried to make it as immersive as possible.”

HoloGrid: Monster Battle AR will be available in the next few days. 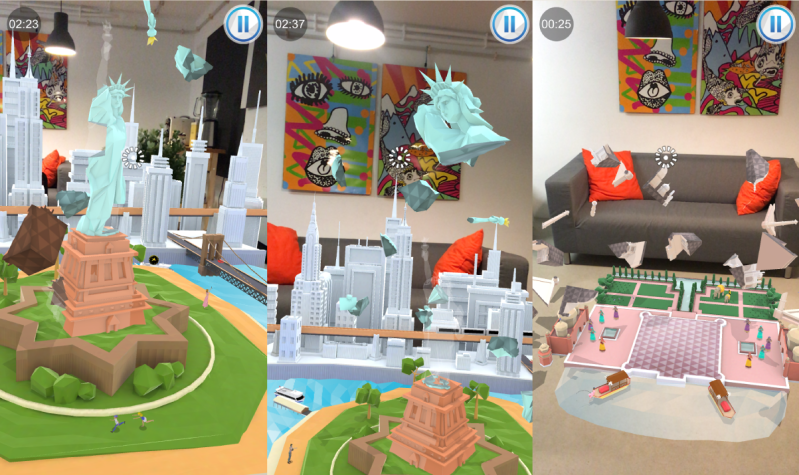 Bica Studios’s PuzzlAR wants to bring the old-fashioned jigsaw puzzle into the 21st century. It’s available today and will feature three landscapes for players to piece together: the Statue of Liberty, Taj Mahal, and Saint Basil Cathedral. Each landmark sprouts up on a patch of land, and when players complete the puzzle, it shows off a victory animation, such as fireworks for the Statue of Liberty. A previous version of PuzzlAR was available for the HoloLens.

Nuno Folhadela, Bica’s CEO, says that they chose puzzles and landmarks because they felt that they would make for an intuitive introduction to AR.

“The majority of the AR games presented till now are very niche or complex, forgetting that this is a new medium where the users and especially, the developers, need to learn how to interact with it,” said Folhadela. “The UI/UX rules have changed. When we started developing the prototype and adding the tiny details, the ambient music and sound, we immediately felt transported to the place we were building. We knew we were onto something.”

Moving forward, Bica will add a new landmark each month, and players can vote on the new content. For the next round of landmarks, players can choose between Brandenburg Gate, Forbidden City, Palace of Westminster, and Himeji Castle.

In an early iteration of the game, players couldn’t adjust the difficulty levels. After hearing feedback from playtesters, though, Bica added that feature in. Players will be able to replay levels with higher piece counts and higher difficulty settings will also hide parts of the environment. 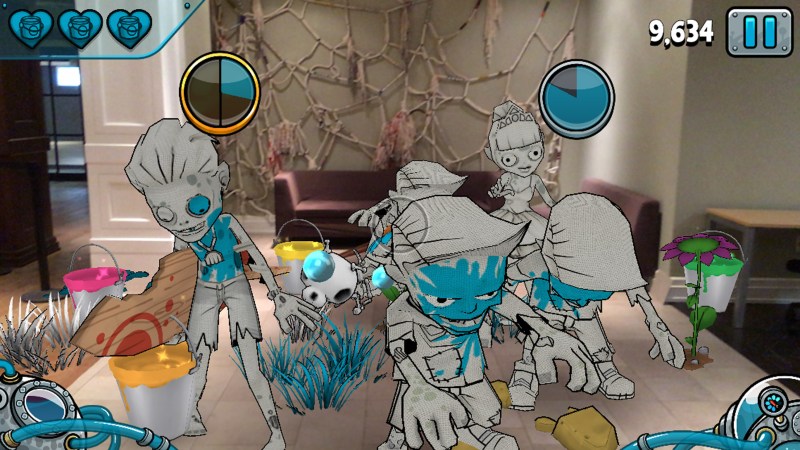 Crayola Color Blaster, an Android mobile game that came out late last year, was already available in AR using the Google Tango platform. Legacy Games originally partnered with Crayola and developed it as part of Google’s Tango incubator, and HitPoint Studios published and distributed it. Now, HitPoint is taking the lead in developing its reincarnation on Apple as Color BlastAR.

Like in the original, Color BlastAR will have kid-friendly zombies flood the screen, attempting to steal the player’s paint. They will have to defend themselves by flinging paint at enemies and coloring them in to defeat them. This classic arcade mode will be accompanied by a story mode down the line, which will feature a quest to defeat a color-stealing wizard.

After launch, which will be sometime in a week from today, HitPoint and Legacy plan on releasing new characters, power-ups, and social features like a leaderboard. Legacy CEO and president Ariella Lehrer says that creating an AR game for a younger demographic has its challenges. For instance, parents may be reluctant to give their expensive smartphones to a child to play the game. Another consideration is the weight of the phone, particularly for younger children.

However, she believes that AR games will appeal to kids.

“Children truly have a sense of wonder that most adults have lost,” said Lehrer. “They are delighted by seeing the virtual objects and characters in their world. As is true for many things they experience in life, they don’t understand it, but accept it as something magical.”

Lehrer adds that arcade shooters and collection games are easy for kids to grok. AR games also utilize children’s physical environments, which can be a boon for engaging players who are 12 years and under.

“[…] Kids aren’t capable of true abstract thinking until around age 12,” said Lehrer. “They are rooted in physicality, use their bodies to explore and understand the world. We have not been able to exploit this fundamental characteristic of kids when designing games for them, until now. These new AR technologies will support gameplay that requires kids to explore their real physical environment. Getting kids off the couch and looking for hidden objects or responding to virtual characters is hugely appealing to kids.”