It’s the weekend before Game Developers Conference, and I am hunched over my monitor repeatedly wiping the time scrub on the Armikrog trailer over the same few frames of animation. My eyes are locked on the star of Armikrog (coming to PlayStation 4, Wii U, PC, Mac, and Linux later this year), an alien who has crash landed on a strange planet, crossing a room where light from a window is bouncing off of the contours of his body. With each pass of the walk cycle, I become more obsessed with that damned light.

If it were any other Unity game, this common light effect would go completely unnoticed. What has me perplexed is that Armikrog’s art assets have a claymation look. The developer, Pencil Test Studios, either created one of the coolest 3D-model clay shaders I’ve ever seen, or they shot the in-game animation the old school way: with real life sculptures (and fake light from Unity).

After 20 minutes, I slumped back into my seat and gave up. I knew I’d get my answers at the Game Developers Conference….

An alien in a strange world 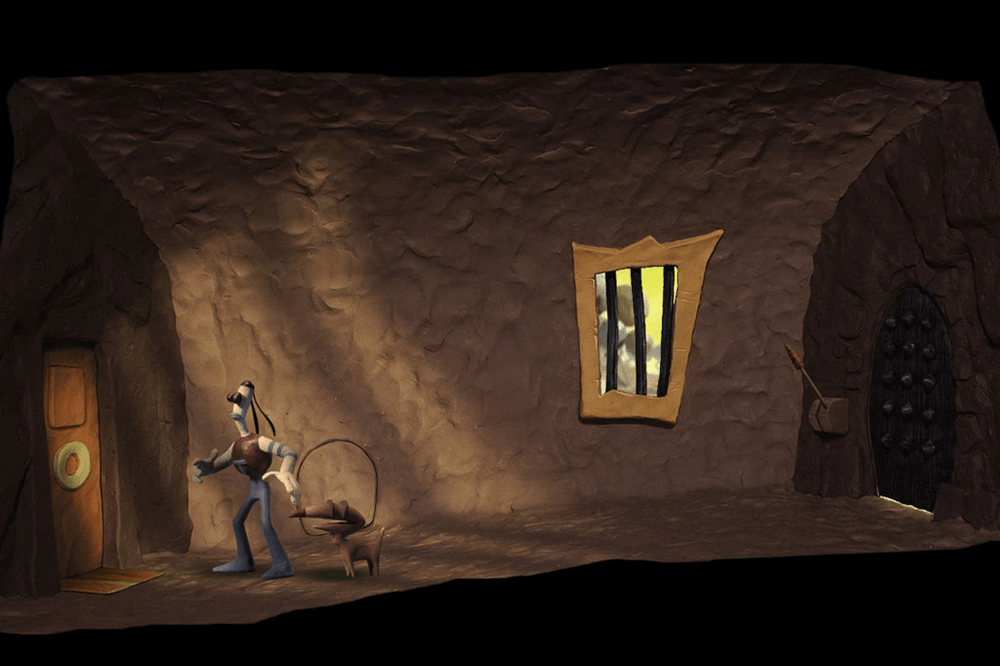 Above: The scene in question.

Within a split second of walking into a quick demo session for Armikrog, I received part of my answer. The clay-and-rubber mannequins of the game’s hero, Tommynaut the alien astronaut, and his dog companion Beak-Beak stood inconspicuously on a table. In this age of being overwhelmed by digital art, it’s a cool rarity to see video game characters in analog form.

The art nerd in me struggles to hold back the lighting question as the demo begins. Tommynaut and Beak-Beak have crash landed on a strange — and certainly hostile — alien planet. They soon find themselves within the walls of a four-tower fortress. Each tower is filled with mysterious secrets and environmental puzzles, which Tommynaut and Beak-Beak must decode.

Armikrog is a classic point-and-click adventure, where a specific sequence of items interlocking with environmental objects will lead toward another puzzle. Pencil Test Studios isn’t using a traditional inventory system, which requires manipulating a UI filled with miscellaneous doodads. Instead, if the player has an appropriate item for a puzzle, the solution is simply to click where that item should be placed in the environment.

For example, Tommynaut could pick up a hand crank early in the game. Later, he runs into a device that is obviously missing a handle. The player simply has to click the device for Tommynaut to pull out the appropriate crank and start turning. Pencil Test Studios is looking to simplify the experience and keep it about puzzle solving, while not falling into the trap of vague or insane crafting sessions.

Some puzzles will require swapping to Beak-Beak, who can crawl through tight spaces and travel through the towers’ strange duct ways. Beak-Beak, being an alien dog, also sees the world around him differently than Tommynaut does. Beak-Beak is color blind, so the environment turns black and white when he’s selected. What he lacks in color perception, however, he gains in being able to see special wavelengths that Tommynaut can’t. During the demo, Beak-Beak’s dog vision revealed an invisible clue tagged on a wall, which we could not see before.

So how is the clay sausage made? Above: Hey buddy! That looks like a lot of hard work there.

Pencil Test Studios didn’t just build the characters out of traditional sculptural materials. Everything in the game is created out of some form of real-world media — the rooms, objects, environments … you name it.

The design team is made up of three artists with an impressive track record for this sort of work. Ed Schofield, Mike Dietz, and Doug TenNapel are long-time animators who had their hands in another cult claymation adventure game: The Neverhood. This is definitely a style of art creation they are familiar with.

So how did they pull off that damned light? If you guessed pre-shooting the clay assets then putting them onto a 2D plane in Unity, you’re right!

Since they are using a 3D environment to move 2D assets around, they can throw in a specially tweaked spotlight to create the subtle illusion of the characters moving through light and shadow to match the clay backgrounds. These setups can also get complicated, with some rooms requiring up to 15 layers of objects and assets to manipulate.

If all of this comes off as moon speak to you, let me put it this way: We still live in a world where people can create game art assets out of clay and stop-motion animation. That’s cool as hell.