[Updated: 7:40 pm: Machine Zone’s CEO has confirmed the game was published by its Epic War division].

Machine Zone has been singularly successful with its Game of War: Fire Age, the epic fantasy-strategy game for mobile that has been the world’s top-grossing title in the $30 billion mobile gaming market since the summer.

But now a mysterious new game, Mobile Strike, has gone live and is being advertised by a company dubbed Epic War. Actor Arnold “Terminator” Schwarzenegger is the front man for the art work promoting the modern warfare game. Multiple sources have told me that Epic War is a division of Palo Alto, Calif.-based Machine Zone, and the sources noted the similarity between Game of War and Mobile Strike. Machine Zone is also the owner of the Mobile Strike trademark.

After months of testing in territories, the game went global today on Google Play, iOS, and Amazon on a global basis. In response to our story, Machine Zone confirmed that Epic War is its new studio and that it has developed Mobile Strike.

“We are very excited about the launch of Mobile Strike and are thrilled to have an icon like Arnold Schwarzenegger as our partner and personification of the game. We decided to adopt the tried-and true-studio model that many developers employ and are also excited to announce Epic War, our new studio whose staff is devoted to developing and managing this new game,” said Gabe Leydon, cofounder and CEO, Machine Zone, in a statement.  “The new studio will allow us to maintain the existing, dedicated resources to Game of War and in fact, we intend to grow the GOW-focused engineering and customer service teams. We are constantly striving to improve the game experience for our passionate and loyal players.”

Machine Zone released Game of War in the summer of 2013, and it has had tremendous staying power, remaining in the top-three grossing list for most of the past two years in the nearly $30 billion gaming industry. It surpassed Supercell’s Clash of Clans this summer to be the No. 1 money-making game. Machine Zone chief executive Gabe Leydon recently talked about his company’s strategy at our GamesBeat 2015 conference. Revenues for Game of War are believed to be in the millions per day and hundreds of millions per year.

Above: Gabe Leydon, CEO of Machine Zone, has been focused on just a single mobile game … until now, apparently.

Mobile Strike is the first Machine Zone game to get a worldwide debut since the launch of Game of War. If Mobile Strike’s development bears any resemblance to the original Game of War, it’s going to be a huge bet. 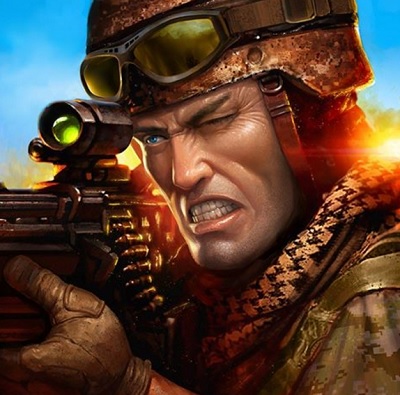 As GamesBeat has noted before, Leydon bet everything on Game of War, putting a team of 80 people on it for 18 months. They created a messaging infrastructure, built a translation layer so people around the globe could join each other in alliances, designed a complex strategy game that players would come back to over and over, and even raised a round of venture funding to underwrite it all. He even took out a Super Bowl ad with supermodel Kate Upton, in commercials that gained a life of their own on YouTube. Game of War runs on very low-end Android phones, giving it the widest possible distribution among smartphones and tablets.

Machine Zone has tried to keep the magic going, and it launched a new series of commercials starring singer Mariah Carey in a new campaign for Game of War. During that campaign, the game has stayed in the No. 1 position for the top-grossing games.

At our event, Leydon said that the  company has more than 550 employees, compared to just 95 before the Game of War launch, and it was adding 200 people in Las Vegas to deal with customer service.

He also said that the company was fully occupied keeping Game of War continuously running and updated. It has had some hiccups, like a recent 10-hour maintenance outage and a short-term boycott staged by some high-level players and their alliances. Those players wanted improvements such as better real-time performance and minor bug fixes.

But for the most part, Machine Zone has kept the game running well for existing Game of War players. Game of War is a free-to-play game, where players can start playing for free, but there is no limit on how much they can spend on virtual goods. You can bet that Machine Zone will do what it can to convince Game of War players — particularly those who are spending money at the highest levels in order to make sure their alliances stay competitive in the global rankings — that it will not decrease its investment in Game of War, even as it starts promoting the new game.

I downloaded the new game today on iOS. So far, I’ve been tapping away on the various buttons that come up that ask me to perform missions, join alliances, help alliance members, and build out my fortress. In that way, it’s a lot like the gameplay of Game of War.

In the long run, we knew that Machine Zone had to be working on new titles. It makes sense for the company to take the infrastructure it build with Game of War and use it to run other games based on different popular genres, such as Mobile Strike, on that same infrastructure. Mobile Strike looks like a reskin of Game of War, complete with alliance warfare in relatively early stages. 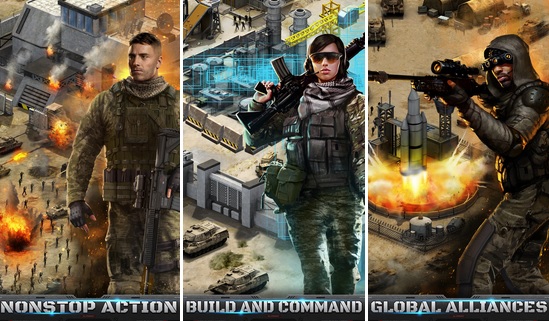 Regarding that infrastructure, Leydon told us at GamesBeat 2015, “The backend is built on something we call multi-messaging, which is a messaging processing technology. It’s a cousin to high-frequency trading. It’s not a typical game server. We’re just able to process all the actions in the game very quickly. It’s very interesting tech. We’ve worked on it for more than four years now. We can handle more than a million players playing together at once in the old version of Game of War. No other game in the world can do that.” 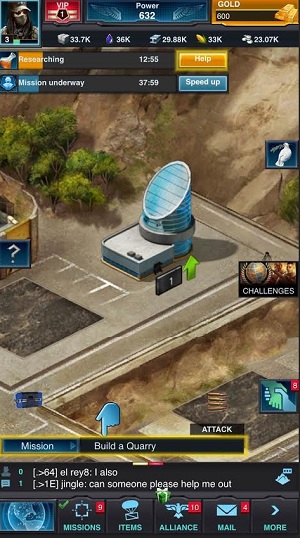 Above: A view of the research facility in a screen shot from Mobile Strike.

Leydon said previously that he didn’t think the “multi-title strategy is going to last,” given how hard it was to maintain a global top-grossing mobile game. But there’s a clear opportunity here. Nobody has made the modern warfare genre — which is huge on the consoles and the PC with franchises such as Battlefield and Call of Duty — into a continuously high-ranking top-grossing game on mobile devices. There are titles like Modern War by Gree, Modern Combat by Gameloft, but they represent no threat to the top three games.

Machine Zone has to be ready with a new game in case players eventually get tired of Game of War and want to play something else.

Leydon spoke about the future of games at our recent event.

He said, “2017 will be, on the distribution side, probably three to five times harder than it is now. People complain about how difficult it is today. People in 2017 will look back and say we had it easy. The complexity of running a game across all devices and all territories will go up. The requirements for a company to be able to execute on that in a high-quality manner will go up accordingly. I can see successful global game companies growing into the range of thousands of people.

“Where I aim to position the company—there’s a lot of tools and technology and processes that don’t exist for free-to-play at the moment. We need to create them and stay ahead of the curve. Niccolo [De Masi of Glu Mobile]sees distribution problems and solves them with stars, which is totally viable. I see it as a technology problem that there currently isn’t a solution for. That’s what we’re dedicating our R&D toward.”