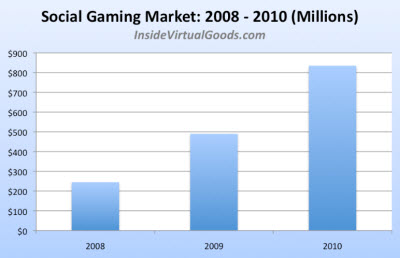 Virtual goods are expected to hit $1.6 billion in revenue in the U.S. in 2010, according to a report from Inside Network.

The most interesting part of that number is that social gaming startups — which didn’t exist three years ago — will account for about $835 million of that total, said Justin Smith, founder of Inside Network and co-author with Charles Hudson of the Inside Virtual Goods report.

Virtual goods are digital items that don’t exist in the real world. They’re often used to monetize free games available on social networks such as Facebook. In Zynga’s FarmVille game on Facebook, for instance, you can buy a hot rod tractor that can help you grow your crops faster. While FarmVille is free, you pay for the tractor using real money via credit cards or other payment systems.

“2009 was the year that casual games like Zynga’s popular Farmville took over the major social platforms and changed the way millions of people socialized with friends online,” said Smith. “Casual games introduced a rich, new way of interacting with friends on social networks, and saw the highest engagement numbers that the online entertainment industry has ever witnessed.”

The revenue numbers are growing fast because of the fast growth of social networks such as Facebook, which has more than 350 million users now. The 2010 social game revenue is expected to be concentrated in the hands of companies such as Zynga, Playdom, Playfish (purchased by Electronic Arts for up to $400 million), and a relatively new player, Crowdstar International.

About half of the revenue from virtual goods comes from traditional games, including stand-alone web site games, massively multiplayer online games, mobile games, traditional virtual worlds, and even game consoles. Among those, Linden Lab’s Second Life is generating a lot of virtual goods revenue.

This year, Smith is predicting that social games will become more mainstream. And while big companies will likely make acquisitions in the space, Smith believes that a lot of small developers will continue to prosper as the market takes off.

The report details how social game developers organize their teams and publish on a frequent update schedule, with numerous iterations aimed at getting more users to play and share the games. It also describes the mechanics and designs of social games and what makes them unique, as well as monetization trends.

The report includes a discussion of Facebook’s platform changes and what is in store as Facebook launches its Game Dashboard and rolls out its Credits currency for games. The 150-page report is available for $995 or as part of an annual subscription for $2,495.