World of Warcraft needs help. The world’s most lucrative online game of the past decade lost 1.3 million paying subscribers in the first quarter this year. And publisher Activision Blizzard, the newly independent parent of Blizzard Entertainment, said last night that WoW’s subscribers declined by another 600,000 users in the second quarter to 7.7 million.

The job of helping stave off that decline belongs to the gentlemen in the picture, game director Tom Chilton and production director J. Allen Brack. I visited them this week at the headquarters of Blizzard Entertainment in Irvine, Calif. They’re wrapping the Patch 5.4 update for World of Warcraft’s Mists of Pandaria expansion pack. The content is done. The game systems are up. They’re in the final iteration and refinement. And this version has a lot of thought in it about how to keep fans in the game for a longer time or bring them back when possible. 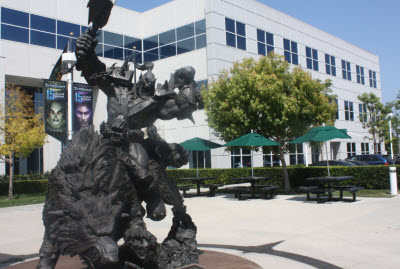 Above: Warcraft statue at Blizzard HQ.

This is the kind of work that can save World of Warcraft, the last big subscription-based massively multiplayer online world, in an industry that has embraced free-to-play gaming. Because of a steady subscription revenue, Blizzard’s WoW has been the mainstay of Activision Blizzard’s financial performance for a long time. WoW debuted in 2004, and it has been the No. 1 MMO in revenues for many of the intervening years. Since 2007, Blizzard has launched four major expansions to keep the subscribers happy. Most recently, it launched Mists of Pandaria in September 2012.

But the usual bump from the expansion was shorter and less exciting, so Chilton and his team committed to doing more frequent and smaller updates for WoW. Patches are coming out every two to three months instead of once every six months. The number of developers working on the game is rising.

With the new version, they are adding a new large raid, dubbed the Siege of Orgrimmar, an upcoming raid instance that will provide more content. The first stage of that raid deals with the aftermath of the Sha contamination of the Vale of Eternal Blossoms. The second stage will focus on the fight in Durotar. There’s a new flexible raid lock system. If you don’t know what that means, well, you probably don’t need to know.

Chilton said that players who have dropped out of WoW have a hard time coming back sometimes. They log in again and find that they’re far behind the other members of their guilds. If they go on group raids with their old buddies, they find that they can’t keep up with the leveled-up characters of their friends. So WoW has introduced a system where players can quickly level up and rejoin friends.

“We lower the barrier,” Chilton said.

A steady stream of players comes in through promos for free trials. For new players, Blizzard has its usual two-week free trial. But it has also made the first 20 levels of the game free to play. After that, you pay a subscription. But that’s a lot of content that is now available for free. Friends can help their neophyte friends learn how to play.

There’s also a new “proving ground” where players can try out new capabilities like serving as a tank or a healer. They can learn how to heal nonplayer characters without looking stupid or being laughed at by other players. So once they enter the real game, they know how to perform alongside their peers. Veteran players can also play in those proving grounds. They can accomplish tasks and win bronze, silver, or gold medals. Only the experts can earn the gold medals inside this arena, which gets progressively difficult over time.

“That can be a game changer for a player to learn,” Chilton said. “We are passionate about making this happen, making it work. There is a lot of intimidation and fear when you are responsible for a group of players.”

For the players who are returning, the task is to keep them engaged with new content. If they play an expansion and grind through that content in a short time, they will pause. That’s why Mists of Pandaria had new game modes and things like pet battles.

“We give players fresh things to do,” Brack said. “If all we do is create new content, then existing players speed through it too fast.”

Blizzard has been busy inviting old players back, enticing them with offers. A player gets a free month of the game or a boost to a higher level if they can convince an old friend to rejoin via a “scroll of resurrection.”

One of these days, WoW just might go free-to-play. It hasn’t happened yet, but Blizzard is selling virtual goods such as pets and mounts in the game. And in an experimental forum, Blizzard is playing with the idea of selling more virtual goods via microtransactions. If that takes off, then don’t be surprised if you see some big changes in WoW.