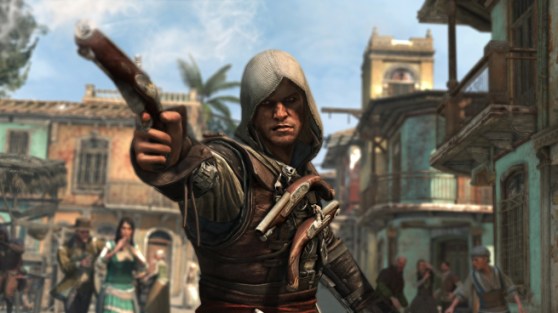 Edward Kenway might not be as tight with the Assassin Order as his predecessors, but he’s not opposed to making a little money on the side at their behest.

Assassination contracts abound in Assassin’s Creed IV: Black Flag (releasing October 29 on PC and all current and next-gen consoles), and at a special pre-E3, hands-off demo, I got to see just how much the 18th century Caribbean setting — and Kenway’s day job as a feared pirate captain — seriously changes Creed’s brand of professional murder.

The demo started off in George Town, the major metropolis of the Cayman Islands … an ash-colored smash of stripped-wood buildings right on the coast. Judging by the map, the city looks absolutely huge, on the scale of Rome from Assassin’s Creed II: Brotherhood. Then the view zoomed out to show the entire West Indies. Black Flag’s world is huge, with more equally scaled cities like Havana somewhere over the horizon.

And it’s all apparently seamless. You can go anywhere in that world without load screens or cut-scene transitions. That completely alters the flow of the game. 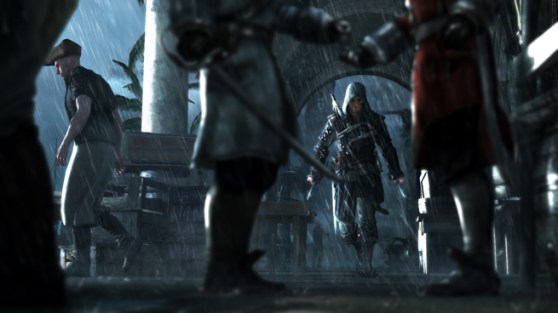 Kenway sailed his pirate brigantine, the Jackdaw, into port and pulled his assignment from a nearby pigeon coop. It’s a twofer — a pair of names the Assassins want on gravestones. Kenway might be more privateer than assassin, but he still has Eagle Vision to light both targets up along with nearby threats — the British sailors in the crowd. Undeterred, Kenway walked right up behind the first target, grabbed his head, and pounded him into a nearby open-air bar one, two, three times.

So, not a silent hit with the hidden blade, then. The other man makes a run for it, and that’s when things get interesting.

The target makes for his docked ship, the Hercules. Kenway has a few opportunities to cut the escape short, including a free-aim that could’ve sunk a flintlock pistol’s shot into the man’s back. Instead, the demo’s driver lets him make it aboard and cast off. Now the entire boat is your target.

Kenway could make a leap and climb aboard as it pulls away, but that could get messy since he’d have to deal with the entire crew on his own. The Jackdaw‘s only a few wharves over, and once Kenway steps behind his ship’s wheel, the chase resumes. You can mark other vessels with your spyglass to track them easily, and sinking the Hercules with the Jackdaw‘s guns would fulfill your contract nicely. Ship-to-ship combat operates largely the same as it did in Assassin’s Creed III, only now your gun crews can track side-to-side and elevate the cannons for better accuracy, and smoke from the weapons can obscure your view for a few seconds. 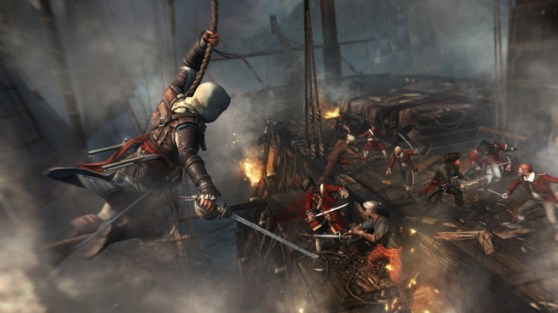 Ah, but you’re still a pirate under that eagle-shaped hood, and a ship at sea equals plunder. Your spyglass even tells you what she’s carrying, and who doesn’t need braces of lumber and casks of rum?

Rather than finishing her off, Kenway cripples the Hercules, leaving her dead in the water. A shimmering halo surrounds her, signaling that she’s ready to board. Steer in from any angle, and your boarding parties will attack. So will Kenway. In our demo, he took over a deck gun and sprinkled grapeshot over the enemy deck, then climbed the rigging to take out snipers in the Hercules‘ crow’s nest. Only then did he hit the deck and join in the battle raging below.

You must meet certain conditions before you “capture” a ship. In this case, Kenway has to cut down 15 soldiers before the Hercules is his, and that deck gun did half the work for him already. But even then, he’ll still have to locate and end his original target. Capturing the ship is a separate goal, and it’s the one he accomplishes first. British solders fall to their knees, surrendering to Kenway’s scurvy mates, and that makes finding his mark much, much easier. He’s the only one still running.

Of course, you can only go so far on a boat. Kenway doesn’t even let him gain much distance before shoving a hidden blade though the man’s chest. Mission accomplished.

And yes, all this happened in-game. Nothing broke the flow of the chase or the capture. Only after the bloody business did the game kick to a cut-scene so the player could decide what to do with the newly acquired prize: add the captured ship to your fleet, salvage it to repair the Jackdaw, or press members of the Hercules crew into joining your merry band.

It’s a far different experience from what I’ve seen in Assassin’s Creed before — and an exhilarating change. You’re encouraged to adapt as the situation changes, but you’re still able to play it the way you want. The entire encounter with the Hercules could’ve gone down a half-dozen ways. It even could’ve ended successfully before anyone hit the water.

Now that’s a sandbox, and I can’t wait to play in it.