Ubisoft had one last big preview session for Assassin’s Creed Origins in San Francisco, where it showed off a couple of hours of new content in the vast open world of ancient Egypt.

The game is a kind of rebirth for the franchise, after skipping last year in its annual launch cadence. The game is coming October 27 for PlayStation 4, Xbox One, and PC. Ubisoft gave the development team more time to come up with the origin story for the brotherhood of assassins during the era of Cleopatra and Julius Caesar.

It’s a big bet in a franchise that has sold 100 million units. And a lot of that pressure falls on game director Ashraf Ismail. I interviewed Ismail at the event, and here’s an edited transcript of our interview. 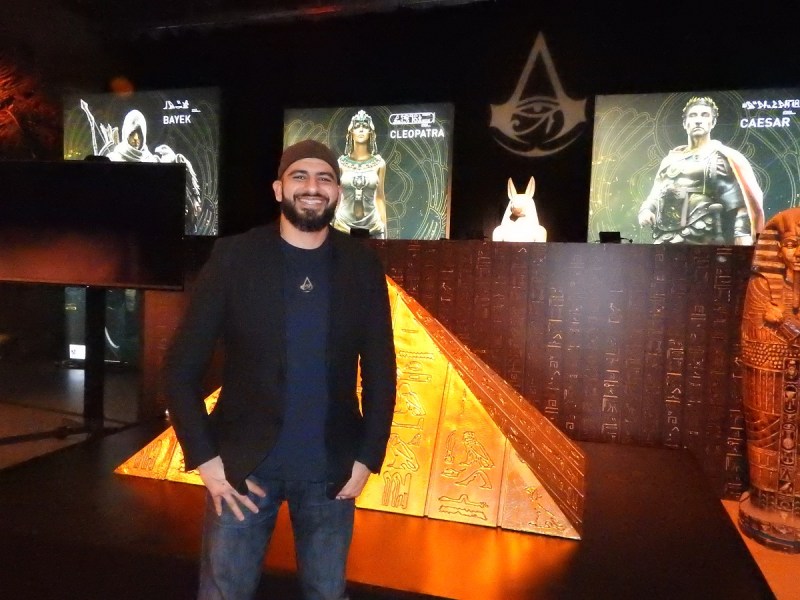 Above: Ashraf Ismail is game director on Assassin’s Creed Origins

GamesBeat: This is probably the most I’ve ever played an Assassin’s Creed game before launch. Is there just a lot to show people?

Ashraf Ismail: The main reason is that we set out to change the experience of Assassin’s Creed, to modernize it and bring something fresh. We’re coming up to the 10-year anniversary, so we wanted to bring something different and new. We didn’t want to just make that claim. We wanted people to play and feel it. That was very important for us. We’re pushing a new combat system, a new RPG element. The world of Egypt itself — AC has always done great big open worlds, but Egypt is way bigger, absolutely majestic. We wanted journalists, YouTubers, whoever, to play it themselves and feel it without us having to yell it and say, “Believe us, please!” That’s the main reason we’ve been putting together these demos and showing it before launch.

GamesBeat: Can you measure how much bigger this is?

Ismail: In terms of map size it’s hard to say. I can explain why. We started with the Black Flag world map, but then we converted all the water to land — land you can walk on, that you can drive on — and we had to fill it with content. All of a sudden the density of content, the amount of content is way higher than we’ve ever done before. It’s one reason we’ve gone to a quest structure. It’s also why we have so many more RPG elements. We need to fill this world with meaningful content. As you explore the world you’re constantly surprised by what it offers you, whether it’s narrative, lore, gameplay rewards, surprising enemies. Whatever it is, we needed to fill the world with that. I’m not sure I can put a number on it, but I can safely say this is by far the biggest AC we’ve ever built in terms of scope, density, and the amount of stuff you can do. 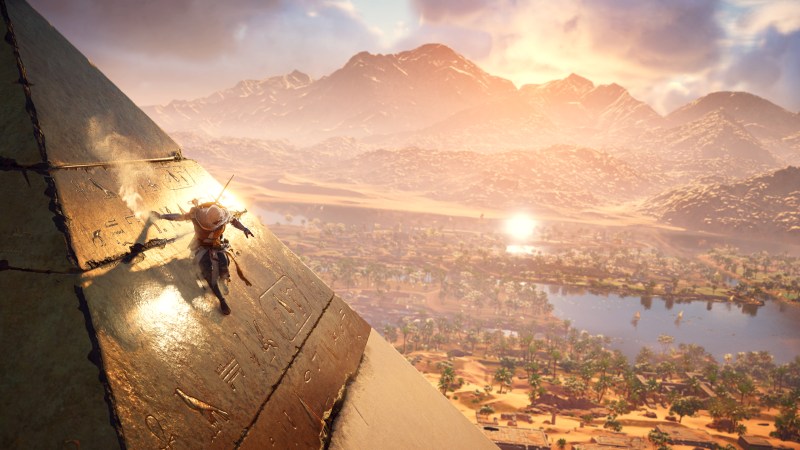 GamesBeat: You can spend a lot of time on things that aren’t quests at all. You could fight alligators all day.

Ismail: Absolutely. The fauna, the wildlife, the NPCs of the world, they have agendas and needs. As a player, for progression system reasons, or for your own exploration, there are a lot of mechanisms you can play with outside of quests. Military locations can be completed. Those are great places to find equipment and gear. They also have captains and commanders that–if you take them out it weaken that camp. There’s definitely a lot of stuff to do. There are tombs and temples. There are surprising puzzles someone’s left in the world for you. We wanted to make sure players have a lot of variety in what they can do. Of course quests are a big part of the game, but there’s a lot more to do in the world.

GamesBeat: I was clearing out some bandits attacking a village, and then I guess I hit one of the red guys, the Romans?

GamesBeat: I guess they’re the cops, something like that? They turned on me.

Ismail: Yeah, that can happen. You have different factions in the world that all have their own alignment to one another and to you as a player. The Ptolemies will generally leave you alone unless you antagonize them, which seems to be what happened there. To some extent they’ll even help you if you’re fighting off bandits or animals. But if you antagonize them they can very quickly turn on you.

Ismail: There’s a bunch of mechanical elements to attack and defense, as well as auxiliary abilities that help you manage the fight. There’s definitely learning to do for the new combat system. You have to pay attention to the behavior of the enemies, the weapons they have, how those weapons work.

The weapons you have, what are they good at? For example, the sword is a good mid-range weapon. Decent speed, decent damage, decent range. But if you prefer a speed play style, you get the dual swords, which are fast and do a lot of damage, but you have to get in very close. Getting in close on a guy with a huge mace, that can be hard. You have to balance your weapons versus what enemies have around you.

There’s more depth in the system. That was important for us. We wanted much more gameplay depth. Eventually you meet bosses who are very unique, who have their own patterns. These are things we wanted to encourage mastery of the combat system, if you’re into that. You’re not forced to get into that. But if you love the combat, the idea is there’s a big learning curve for you. There are lots of weapons to learn about, a lot of unique enemies.

GamesBeat: With the timing, is there almost a For Honor quality to it?

Ismail: Timing is very important. It’s a big part of the combat system. I wouldn’t compare it to For Honor in that sense, except that timing does matter. It’s a very different system, though. Again, we wanted something that was very dynamic, very reactive, but with gameplay depth. Now mix in — you have bows, you have melee weapons. We wanted you to be able to switch very quickly between those. You can be riding on a camel, jumping off the camel, being knocked off the camel, landing on the ground, and the idea is this should be organic and dynamic. You should not have to rethink the controls. The controller will work the same in all of these different contexts.

GamesBeat: At this stage in the game, can you set more of the scene for what’s happening? It sounds like Bayek has to assassinate people in multiple cities to make progress.

Ismail: What you experienced today is the beginning of an element in the story where you’re introduced to this bigger group called the Order of the Ancients. There are multiple heads to this order, and it gets you to trek across Egypt. Players are quite free to go after targets as they wish. There are levels to them, so we kind of hint at relative challenge. I will add, there is a variable difficulty level to the game. If you’re really not into the combat and want an easier experience there, you can set the game to an easier mode and focus on the narrative if you want to. Or you can make it harder, if you really want that extreme challenge.

GamesBeat: It seemed like this area really is dense with missions to do. Everywhere you turn there’s an explanation point.

Ismail: We’ve had four years to make this game. We wanted to make sure Egypt was very full. We didn’t want anybody to come out of this thinking it was somehow a barren landscape. It’s full of content, whether it’s quests or locations or the life in the world. That’s why it’s taken so long.